A Leap Forward and a Look Back 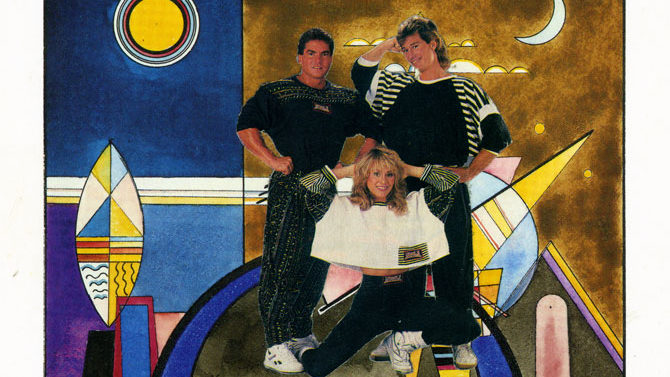 Stepping Out: “Emerge” is defined as “to come out into view,” and that is exactly what the current installment of “ATHICA EMERGES 6” embodies. Curated by gallery manager Hope Hilton, the annual exhibit homes in on the act of emerging as an artist in Athens, a community built by creators and thinkers. The show represents a big step for all six artists featured, whether it serves as their first show as a post-grad, their first show in town or simply one of their first shows in a professional gallery space.

For recent Lamar Dodd School of Art graduates Eric Simmons, Aja Steele and Andy Giannakakis, the exhibit symbolizes a leap into the post-textbook realm. Walking into ATHICA, it’s hard not be captivated by Simmons’ scrolling Star Wars font detailing the wonderfully bizarre background story of “The Kandoskys,” a collection of small collages depicting body builders posing in front of their favorite Wassily Kandinsky paintings. Simmons brings a sense of humor to the exhibit, especially when he informs the viewer that “body builders were among the very few people that truly understood modern art.”

Steele contributes two large and seemingly simple white quilts. Upon a closer look, though, the words “XANAX” and “GLOCK” become visible. The intricate stitchwork lending way to unexpected words is captivating and jarring, demonstrating a juxtaposition of comfort and discomfort.

Giannakakis demonstrates a more traditional approach with his abstract oil paintings and ink washes. While they could be viewed as a nod to neo-expressionist artists like Jean-Michel Basquiat, Giannakakis aims for something much larger—an exploration of human themes such as society and space comes through his array of muddled hues and textures.

It’s not uncommon for a university town to have a rotating cast, but characters like Simmons, Steele and Giannakakis make it what it is: a home to artists. It’s not just students, though. Manda McKay, self-taught through experimentation, has only been painting for two years but has already made an impact on the local art scene. Despite her not having formal training, her oil paintings are nothing short of thought provoking. The initial hyperrealist images give way to various free strokes up close, and her sexually suggestive arrangements of fruit, bones and flowers bring an element of playful wit to the exhibit.

Whereas McKay’s paintings are extremely detailed, “EMERGES” artist Susan Hable creates flowing large-scale ink works. With a background in textile design, Hable reflects on simplicity in nature and natural ink patterns. Hable and McKay create a contrast in how they explore the natural world in very different lights.

Husband and wife duo Spirit Cat aim to reset the mind and simulate a vacation with their interactive installation. Florida transplants Ciara and JT Bringardner are re-establishing themselves in Athens after being a prominent force in the Gainesville arts scene, formerly parenting music and arts festival Total Bummer Fest. Their piece at “EMERGES” features all original music, a hand-woven structure inspired by the geodesic dome and a chance to “cleanse the mental palate.”

As part of its mission, ATHICA continues to present challenging and innovative art, events and discussions. On Saturday, Aug. 10 at 7 p.m., the gallery’s summer interns will host a movie night. The following Saturday, Aug. 17 at 6 p.m. associate professor of mathematics Jason Cantarella gives an experimental performance. ATHICA Emerges 6 concludes Sunday, Aug. 25 at 4 p.m. with “Microtalks,” a series of short discussions curated by Tinker Lab Collective, and a screening of works by international video and sound artists featured during SLINGSHOT 2013, curated by Eric Marty and Kai Reidl. The conversation has begun.

Culmination of a Craft: It’s not often that a local artist is offered a solo show at the Georgia Museum of Art, but potter Michael Simon merits an exception. Considered one of the most influential ceramic artists of his generation, Simon has displayed a Zen-like commitment to his craft, believing in the power of a body of work and the process it takes to develop.

Born in Springfield, MN in 1947, Simon’s first encounter with the unpredictable medium was in high school. Inspired by his teacher, Angel Lillo, he enrolled at the University of Minnesota to further pursue his newfound passion. He moved to Georgia in 1970 to continue exploring beside former classmate Jerry Chappelle. Chappelle, a professor in UGA’s ceramics department—the first ceramics department in the Southeast—founded the pottery commune Happy Valley, a simple environment where potters, including Simon, could submerge themselves in their craft. The romantic lifestyle appealed to Simon, and he has remained a Georgia resident ever since, obtaining a master’s degree and later teaching at UGA.

“Pick of the Kiln: The Work of Michael Simon”—on display at GMOA through Sept. 8—presents a unique look at Simon’s work by providing a timeline of his growth as an artist. In the mid-1980s, he began keeping a single item from every kiln he fired, creating a documentation of his career. The exhibit, which contains 83 pieces and moves in chronological order, captivates with the subtle evolution of his work. The body of work transitions from hues of brown to contrasting blacks and whites to the inclusion of teals. Figures of birds, fish, trees, flowers and seed pods—now a staple for Simon—also emerge over time. His distinct incorporation of the natural world and his attention to space make his pieces one of a kind and pay homage to his rural lifestyle.

“These picks serve as markers of my development, lest I forget where I started,” Simon says.

A reception, beginning with a group discussion moderated by potter Mark Shapiro, will be held on Sunday, August 25 at 1:30 p.m. at the Georgia Museum of Art.