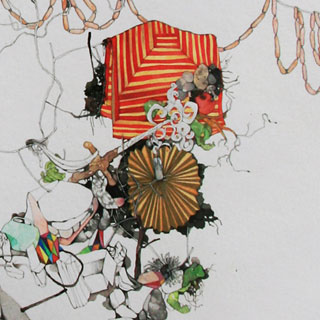 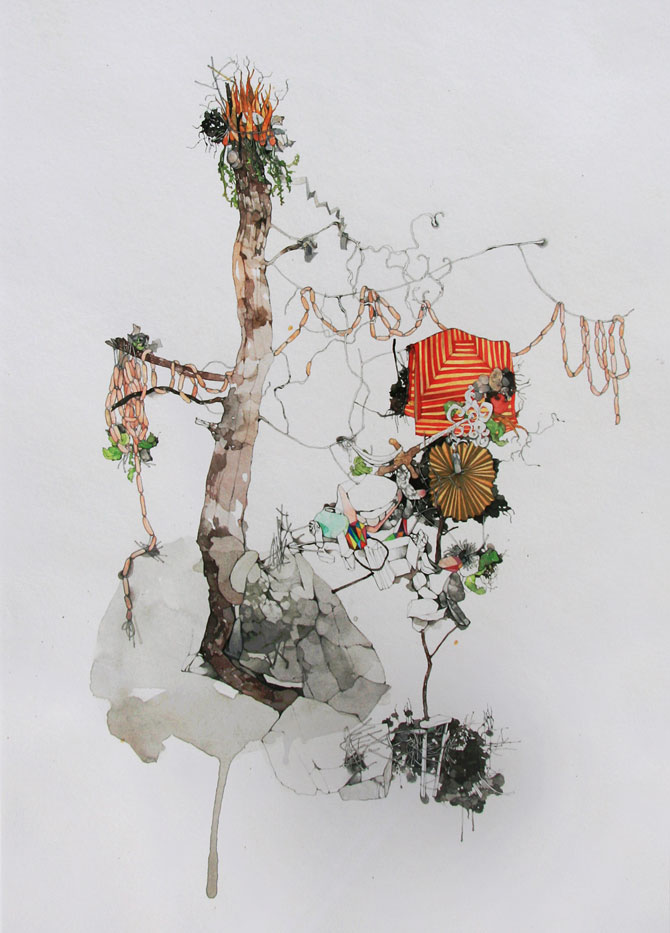 Lauren Gallaspy’s work “Gee’s Bend tree” is part of the exhibition at the Gallery@HotelIndigo.

With new leadership and refocused curatorial vision, the Gallery@Hotel Indigo-Athens presents two exhibitions: â€œDRAWN: from Athensâ€ and â€œLooking for Light.â€ Local artist, designer and arts educator Didi Dunphy is the new director and curator for the Hotel Indigo galleries, building on the mission of the hotel to highlight local and regional artists. Now at the helm, she is re-branding the gallery and developing an exhibition program to bring together smart, professional, local arts to the public in the form of quarterly exhibitions in the Gallery@Hotel Indigo-Athens as well as artwork in the Glass Cube at the opposite end of the hotel.

In an interview, Dunphy explained that she â€œloosely commissionedâ€ Michael Oliveri to create a sculpture that would make the most of the Glass Cube, a small, enclosed square that she hopes to reinvent as a â€œproject spaceâ€ for more experimental works. â€œLooking for Lightâ€ is a chandelier of sorts, made up of carved, wooden butterflies that float in the space. In the Gallery at the opposite end of the hotel, Dunphy curated â€œDRAWN: from Athens,â€ an exhibition of drawings by 11 artists based in Athens or within the region. Bringing together a variety of styles and artists at different stages of their careers, the show illustrates a breadth of approaches to drawing. Two works, a series by Kathryn Refi and two drawings by Art Rosenbaum, were made specifically for this exhibition.

Dunphy says that the inspiration for the exhibition came from a desire to focus on drawing as â€œthe essential act. [Drawing] leads to anything and everything.â€ The artists here have each approached this key practice in different ways. Leslie Snipesâ€™ tightly controlled and minimalist geometric drawings on graph paper are reminiscent of some of Sol LeWittâ€™s work. Close examination of the marks she makes reveals the pressure points of starting and stopping: the pulse beneath the mathematical precision of her drawing. Illustrating a system is also part of Refiâ€™s â€œSearching for Kathryn Refi,â€ in which she typed in first one letter of her name, then two, then three, and so on into a Google Image search. She then created realistic drawings in pastel of the image produced by the search to create a series that begins with simply one letter and ends with an image of the artist herself.

Art Rosenbaumâ€™s two drawings, â€œGone to Hiloâ€ and â€œPoor Ryanâ€™s Lost at Sea,â€ are also self-portraits (at least in part), which incorporate images of a ship at sea, paints and brushes, and a couple in an embrace. The energy of these forces of nature is drawn with an expressive line full of movement and vigor for which the artist is well known. Learning that these drawings are, indeed, quite new only adds to this feeling of immediacy. Also out at sea is Michael Oliveri, whose drawings with light appear to be nighttime flashlight squiggles captured on film. In fact, they are records of wave patterns, as he attached a camera to a boat with its lens trained on the planet Jupiter. Also drawing with a fluid and lyrical line is Jim Barsness. His large work, â€œThe River, the Woods, the Fallsâ€ depicts figures in a collage with hybrid creatures cavorting across a field of newspaper clippings, cartoons, notes and musical compositions.

Jessica Wohl explores themes of memory, domesticity and subjectivity in her deceptively perfect drawing of two McMansions, â€œTwo Blue Houses.â€ The nearly identical houses float on a white field, each brick and manicured shrubbery leaf accounted for, but with no sign of life within the homes. Wohlâ€™s three drawings, â€œInside,â€ â€œTwistâ€ and â€œBillow,â€ each made in one day, are more organic with the spontaneity of the exercise reflected in the abstract, wispy lines. Clay McLaurin, a professor of fabric design at UGA, presents drawings created with a sewing machine. In his â€œLoopsâ€ series, he uses this domestic device to draw in thread what looks like paramecium with waving cilia, each winding around in columns in what McLaurin describes as a â€œperformativeâ€ style of drawing. Susan Hable, also a textile designer, presents five drawings in black ink, distilling a leaf, feather or geometric pattern into a bold, simplified mark.

Re-envisioning the natural world is also a part of Lauren Gallaspyâ€™s drawings in ink and watercolor. It appears that a splash of watercolor starts the painting with lines emerging and growing to creating images from this act of chance. The four works here are each beautiful on their own, but speak to each other in the mirroring placement of the faceted, molecular shapes in â€œTeratomaâ€ and â€œThe Seatâ€ and the biomorphic forms in â€œSweet Potato Nothingsâ€ and â€œGeeâ€™s Bend Tree.â€

Two drawings by former-Athenian Jeff Owens bring his singular style back home. Owensâ€™ black contours are electrified against a mustard-yellow ground in â€œMices,â€ a multi-eyed and twisted monster version of Mickey or Mighty Mouse. Jaime Bull, a current MFA candidate at the Lamar Dodd School of Art, also presents animals made from a surreal concoction of metallic shimmer and florescent ink in â€œPoodle Pile.â€

Fostering relationships between the artworks in the exhibition is a particular talent of Dunphyâ€™s. She said she imagined the show as an exercise in â€œputting together a fantastic dinner partyâ€ where she â€œset up conversations between the pieces.â€ As a designer, she is attuned to the placement and play of ideas and styles, which makes viewing the exhibition all the more fun as you begin to draw correlations between artworks. Next up for the Gallery will be an exhibition perfectly timed for our gorgeous Athenian spring, â€œBloom,â€ which will open in April. Dunphy chose six artists to present their work in a variety of media for a colorful and vibrant exhibition focused on botanical themes.