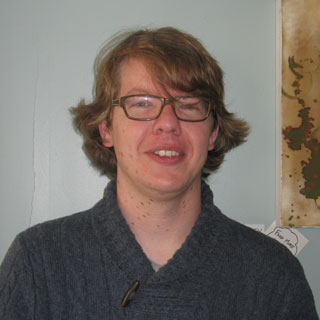 Lee Roberts had worked as in artist in New York City for seven years when he decided to quit. He had earned a BFA, exhibited work in galleries, and won a prestigious artist residency, but he decided to put those things aside in order to pursue a line of work in which he could help people on a fundamental level. Now he is studying to become a nurse practitioner at UGA while working at the Veterinary Medicine Reading Room, familiarly known as the Vet Library. While Lee still makes art regularlyâ€”he carries his sketchbook with himâ€”he no longer considers himself an artist by occupation.

Flagpole: Why did you decide to study art?

Lee Roberts: Well, my grandmother and I painted together when I was a kid starting around age fourâ€”as far back as I can remember. She was self-taught and very talentedâ€”in some ways, more talented than I will ever be. But we would take stuff from National Geographicâ€”some of them were, like, ads for parakeetsâ€”and we would cut them out, and she would draw them out for me. Basically, she made the art entirely, but I felt like I made it because she mixed the color for me and guided my hand while I applied it. So, I have these savant-looking drawings and paintings that are dated from 1984. My friends are like, â€œDid you actually?â€ And I’m like, â€œNoâ€¦”

When she passed awayâ€”you know how kids get weird stuff in their headâ€”I was like, â€œOK, I’m going to become an artist for her,â€ which seems really strange when I look back at that. Then, I kind of gave up on regular school, and all I did was draw and paintâ€¦ One thing leads to another. My family had always wanted me to be a doctor.

FP: You said you moved to New York from Atlanta in 2005 to work as an artist. How did that come about?

LR: I went to school in Baltimore, and then I lived in Connecticut for awhile. It was a huge wash because Connecticut is crazy expensive, and I couldn’t get any sort of reasonable job because I was fresh out of undergrad and I had a BFA. It’s like, â€œWhat are you going to do with that?â€ So, I moved back to Georgia, and I lived in Atlanta for a little while, and it was actually really fun. I lived there and had a dinky job and painted all the time. Then, I started applying for grad schools and things like that, and I got into this ritzy artist residency. No one’s ever heard of it, but it’s kind of a big deal. That was in Maine, so I went up and I did that.

FP: So, that was the type of program that supports you while you work there?

LR: More or less, yeah. Usually you pay something to be there because if you didn’t, they couldn’t keep it afloat, but I definitely didn’t pay what it cost. I mean, I eat like a horse. Just to feed meâ€”I don’t think I even paid for the amount of money that it would take to feed me for that time. It was like three months. I think I paid $700 for the whole thing, and they house you, feed you, and they have visiting artists come through the studio and tell you, â€œDo this. Don’t do that.â€

FP: Was it a productive experience for you?

FP: What was the move from New York to Athens like for you?

LR: I actually would say the thing I found most shocking was that people think of New Yorkers as quite liberal. Maybe it’s just the people I hung around with, but I consider Athens the most liberal place I have ever livedâ€”like, makes the liberals I knew in New York look like staunch Republicans by comparison, so that’s been really surprising.

FP: Do you have an example of what you mean?

LR: I don’t know. I’m trying to think. It’s like: if you thought there were only x number of colors in the rainbow, and then you found out that the rainbow was much wider than you thought it was. The people in New York, they kind ofâ€”just because of the pressure of living thereâ€”they all move slightly toward the middleâ€¦ Here, you find people exploring much more of a dramatic, wide range of political beliefs.

FP: Do you find that frightening?

LR: Sometimes, yeah. It was a little disconcerting at first. Things that I considered experimentalâ€”beyond the paleâ€”were beliefs that people had.

FP: So, you’re here studying to become a nurse practitioner. Why the change in career goals?

LR: Art is great, but there’s kind of this self-centered component to it that I was kind of happy to let go of. When my mom got sick, and she really needed help, and my step-dad passed away because he took horrendous care of himself, I kind of realized: there’s a lot of people who need help. Art is cool, but there’s a lot of people who need more basic stuff than cultural enrichment.

FP: Do you consider yourself a former artist, or do you still think of yourself as an artist?

LR: I guess kind of how I define it for myself is: I’ll always make art, but I don’t really have any huge need for anyone to see itâ€¦ But yeah, I do consider myself a former artist. I do think that making artâ€”and this sounds kind of like a bad analogyâ€”it’s a little bit like a drug addiction. If you let yourself really go back into it, it will take your life over. I think that’s kind of why, when people ask me, I’ll jokingly say I’m a recovered artist, because it’s actually a little bit true. I try to have fun with it, but I try not to give it too much time. Like, when people offer, â€œOh, we can show your workâ€â€”because I still have contacts in New York, and every now and again, they’ll contact meâ€”I always say no, because it would be so easy to let it flow right backâ€¦ I don’t think you have to stop making it; I just think you have to stop thinking of it as a career.

FP: Will you tell me about what you at the Vet Library?

LR: Basically, the vet students work really hard, and we’re there to make sure it’s always open, and if they need copies of articles, we copy them and email them to [the students]â€¦ You shelve books, but the Vet Library is a little weird in that people check out the same seven books over and over again. It’s like people are cycling through studying the same things, so everyone’s studying parasites, or everyone’s studying equine lameness. It’s kind of interesting because I don’t really understand it, but I do know that at any given time, there’s one bookâ€”it’s not always the same bookâ€”that everyone’s trying to check out at the same timeâ€¦ We do do shelving, but there’s seven books, and I know where they go. Occasionally, someone checks out the weird book on iguanas, and I’m like, â€œWhoa! New book!â€