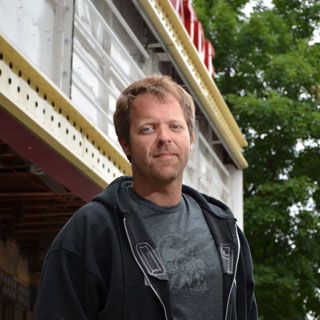 Musician and entrepreneur Wilmot Greene has lived and played in Athens for over 20 years. In 2004 he bought the Georgia Theatre and began to transform the space with countless renovations and improvements. After a devastating fire gutted the landmark music venue in 2009, he has worked tirelessly to ensure its reconstruction and reopening.

On what makes our music scene special:

We’ve created our own beast down here. It’s so Southern. It’s quirky. It’s got kudzu wrapped around it. But what’s really cool is that people don’t form bands in Athens to “make it.” I think people in Athens play music because it’s art, and they are just doing what feels rightâ€¦ There is a sense of freedom, and the scene just encourages you to think outside the box and do something different.

On our history and future:

I think this younger generation has sort of moved away from the R.E.M., B-52s days. The scene was based on what they did, but it’s grown and morphed into so much more than that. UGA students come in and they feel this energy, and they see this artistic scene going on, and they put their own little spin on it. They work on that spin for four years, and that cycle constantly repeats itselfâ€¦ The scene just evolves. It’s constantly evolving.

On the challenges of being a venue owner:

A venue owner is a lot like being an art gallery owner. Some people want to make sure their art is hung in the right place and has the right light on it. They want to present it to the audience in the way that they imagine it. In a room like the Georgia Theatre, where we do every single genre, it’s challenging to provide a clean slate every day and to try to keep from pigeonholing anybodyâ€”audience or band.

On the diversity of talent in Athens:

You can go see death metal and atmospheric pop and math rock and country all in the same nightâ€¦ and I have! The big question isâ€”what do I wear?