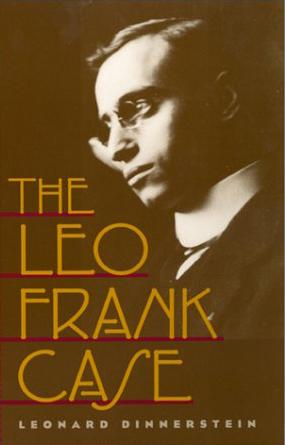 The case of Leo M. Frank, the most important Georgia criminal proceeding of the 20th Century, has been the subject of dozens of books, and hundreds of articles in magazines, newspapers and scholarly journals. The best single article on the case is still the one by Clement Eaton Moseley, published in the Georgia Historical Quarterly in 1967. Notable among the books are Charles and Louise Samuels, Night Fell on Georgia (1956), Harry Golden, A Little Girl is Dead (1965), Mary Phagan, The Murder of Little Mary Phagan (1987), and Robert Seitz Frey and Nancy Thompson-Frey, The Silent and the Damned (1988). The best and most authoritative book, however, is Leonard Dinnerstein’s The Leo Frank Case (1987), reprinted by the UGA press in March 1999. Dinnerstein, formerly an Atlanta resident and now a history professor at the University of Arizona, wrote his Ph. D. dissertation on the Frank case, and his book is an expanded version of the dissertation.

The Frank case remains, as Dinnerstein reminds us, “one of the most lurid displays of intolerance in the Progressive Era,” and “one of the causes celebres of the century.”

The story of the Leo Frank case reads like a Greek tragedy. As The New Republic wrote at the time: “In ancient times, when a man was treated as Leo Frank has been treated, people felt that an obscene god was pursuing him. No mortal could surround another with such ingenious cruelty. Only a conspiracy of fate could make horror so massive. We try nowadays to think differently, but in the case of Frank it is not easy.”

Around noon on Saturday, April 26, 1913, a 13-year old girl was robbed and murdered, but probably not sexually abused, at the National Pencil Factory in downtown Atlanta, where she was employed. The crime caused tremendous public excitement and outrage, fanned by a massive amount of sensationalistic newspaper coverage.

Leo Frank, the Jewish manager of the factory, was one of several persons arrested for the crime and the only one who was actually placed on trial. Born in Texas, the 29-year old Frank had moved to Atlanta from New York about five years earlier. His mob-dominated, month-long trial in Fulton County Superior Court in July and August of 1913 was the longest criminal trial in Georgia history up to then and resulted in his being convicted and sentenced to death. After Frank had exhausted his appeals, without obtaining a reversal of his conviction, his hanging was fixed for June 22, 1915. The day before his scheduled execution, however, Gov. John M. Slayton commuted the sentence to life imprisonment, and Frank was transferred to a state prison near Milledgeville. Less than two months later, on the night of August 16, 1915, a group of 25 men from Cobb county, angered by the commutation and determined to execute a death sentence anyway, drove to the prison in automobiles, broke into the prison, overpowered the guards, seized Frank, drove him to Cobb county (where the murdered girl had once lived and where she was buried), and murdered him by hanging him from a tree. None of the lynchers was ever prosecuted or even identified by law enforcement officials. Frank received a posthumous pardon in 1985.

The modern historical consensus, as exemplified in the Dinnerstein book, is that, in addition to being apparently the only Jewish person ever lynched in American history, Leo Frank was an innocent man convicted at an unfair trial. As two historians who closely studied his case wrote in 1956: “Leo Frank was the victim of one of the most shocking frame-ups ever perpetrated by American law-and-order officials.” History has thus vindicated the contemporary observer who witnessed the monstrous injustices committed against Frank and wrote shortly after the lynching: “Future writers… will unanimously admit that Leo M. Frank was the victim of a biased sentiment, that his judicial rights were denied him, and that his hanging on a lonely oak was the climax of a series of flagrant violations of justice which ignominiously but undoubtedly will raise him to the position of… [a] martyr.”

History has also vindicated another contemporary observer who wrote in 1915 that “for brevity, the heart of the Frank case may be summed up in three words, ‘politics, prejudice, and perjury.'”

The questionable activities of the prosecuting attorney, High Dorsey, provide a good example of how Frank was victimized by politics and politicians. Dorsey was an ambitious, unscrupulous politician who used the Frank case to propel himself into two terms as Governor of Georgia. Dorsey was quite willing to use false evidence to secure a conviction, and in other ways made plain that he would use any tactic he thought necessary, whether fair or not, to prevent Frank’s acquittal. As Dinnerstein bluntly puts it: “In 1913, when Hugh Dorsey prosecuted Leo Frank, he convinced many people that his primary concern was with his political reputation and not with obtaining justice.” 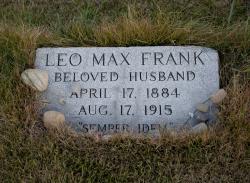 Few criminal defendants have been as victimized by popular prejudices as Leo Frank. Prior to his trial, yellow journalism and what Dinnerstein calls “newspaper hysteria” resulted in numerous headlines and stories containing false or misleading information extremely damaging to Frank. It was falsely but widely reported and believed that Frank was a sex pervert. As a Northerner and factory manager he was the victim of prejudice against Yankees and the corporations that employed child labor. He was also the victim of anti-Semitism. One ugly rumor widely circulated at the time, Dinnerstein tells us, was “that the tenets of the Jewish faith forbade the violation of Jewish, but not Gentile, women.” During Frank’s trial crowds outside the courthouse chanted, “Hang the Jew.”

As for perjury, it is quite clear from the Dinnerstein book that much of the testimony fro various prosecution witnesses at Frank’s trial was perjured. the key witness against Frank was Jim Conley, the factory’s janitor, who almost certainly was the actual murderer of the young girl Frank was charged with killing. The material parts of Conley’s testimony, so damaging to Leo Frank, were lies, and were known to be lies by prosecutor Dorsey and by the police.

The courageous conduct of Gov. Slayton in personally investigating the case and commuting the sentence of Leo Frank constitutes one of the most admirable, heroic and noble episodes in the history of the office of governor in this state. His 31-page commutation order, in which he expresses doubt about Frank’s guilt and his suspicions about Conley, is one of the great state papers in American gubernatorial history.

Gov. Slayton who acquired the sobriquet “the incomparable Georgian” due to his actions in the Frank case, accompanied his order with this sublime statement:

“Two thousand years ago another Governor washed his hands of a case and turned a Jew over to a mob. For two thousand years that Governor’s name has been accursed. If today another Jew were lying in his grave because I had failed to do my duty I would all through life find his blood on my hands and would consider myself an assassin through cowardice.”

At the end of his book, Dinnerstein concludes that “if the laws of civilization are to be respected, societies must eradicate the conditions which turn men into beasts.” That, he says, is the only sure way to avoid a continuing series of Leo Frank cases. Dinnerstein therefore appears to believe that only systematic inculcation of deep respect for human rights, especially the rights of those charged with or convicted of horrible crimes, can assure that all citizens will receive what they most deserve from government: liberty, justice and rights —the very benefits Leo Frank was deprived of to Georgia’s enormous shame.

Dinnerstein’s book is must reading for all Georgians who believe that knowledge of their state’s history is necessary to avoid repeating the mistakes that have blemished this great state’s past.

But Words Will Never Hurt Me?