Should the U.S. Nuke North Korea Now and Risk War With China? 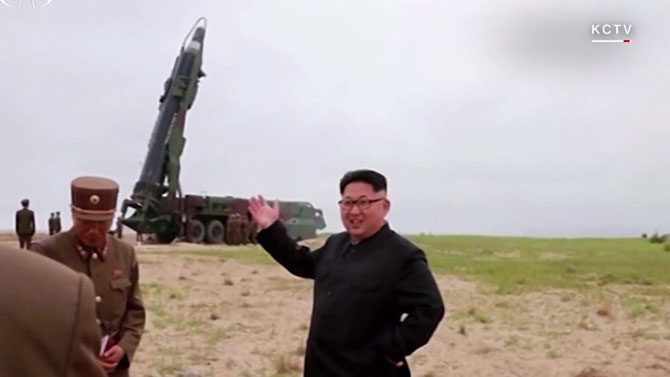 Never mind the legalities of the situation. Never mind morality, either. Just answer the pragmatic question: Is it ever a good idea to start a nuclear war? Because that’s the notion that Donald Trump is actually playing with.

He didn’t say exactly that, of course. He said, “If China is not going to solve [the nuclear threat from] North Korea, we will. That is all I am telling you.” But in the context of that interview with the Financial Times, it was clear what he meant.

This does not necessarily mean that the United States would launch a large nuclear attack against North Korea. If you are really serious about carrying out a “disarming strike” that destroys all of North Korea’s nukes, you probably should do exactly that. (You never get a second chance to go first.) But maybe the U.S. Air Force would promise that “precision” non-nuclear weapons could accomplish that goal, and maybe some gullible people would believe it.

It would still turn into a nuclear war in the end, unless American “surgical strikes” miraculously eliminated every last one of North Korea’s nukes at the same time. Kim Jong-un’s regime would find itself in the position known in nuclear strategy as “use them or lose them,” and it is hard to believe that it would not launch whatever it had left.

The targets would be in South Korea, of course, but probably also American bases in Japan. Maybe even Japanese cities, if North Korea had enough weapons left. The regime would know it was going under—the United States would not take this huge risk and then leave it in power—so it would take as many of its enemies as possible down with it.

North America would probably not be hit, because Western intelligence services do not believe that Pyongyang has ballistic missiles that can reach that far yet. (But “intelligence” is not the same as knowing for sure, and they could be wrong.) At worst, the victims would be one or two cities in the Pacific Northwest.

This would be a very bad outcome for people living in Seattle or Portland, but it would not actually be a nuclear holocaust. The kind of war that the superpowers would have fought at the height of the Cold War, with thousands of nuclear weapons used by each side, would have killed hundreds of millions, and might even have triggered a nuclear winter.

A nuclear war over Korea would be a much smaller catastrophe, perhaps involving a few million deaths—unless China got drawn in. Unfortunately, that is not inconceivable, because China, much as it dislikes and mistrusts the North Korean regime, is determined not to see it destroyed.

The destruction of the North Korean regime would bring American military power right to China’s own border. You might reasonably ask: So what? This is the 21st Century, and what matters strategically is the big, lethal long-range weapons (like nukes), not the whereabouts of a few American infantry battalions. Quite right in theory. Not necessarily right in practice.

During the Korean War, when American troops were operating very close to the Chinese frontier in late 1950, the Chinese regime sent troops in to save the North Korean regime, and succeeded. The scenario this time, with nuclear weapons already being used on both sides of the North Korea-South Korea frontier, would be different, but it could be even more dangerous. China has lots of nuclear weapons, and delivery vehicles, too.

Trump is the fourth American president to be faced with the challenge of North Korean nuclear weapons, and none of them has found a safe and effective way of dealing with it. But all the others avoided making open threats of violence, because that would probably just make matters worse.

Of course, Trump may just be bluffing. In fact, he almost certainly is. But if your bluff is called, you have to go through with your threat or accept being humiliated. The Donald doesn’t do humiliation.