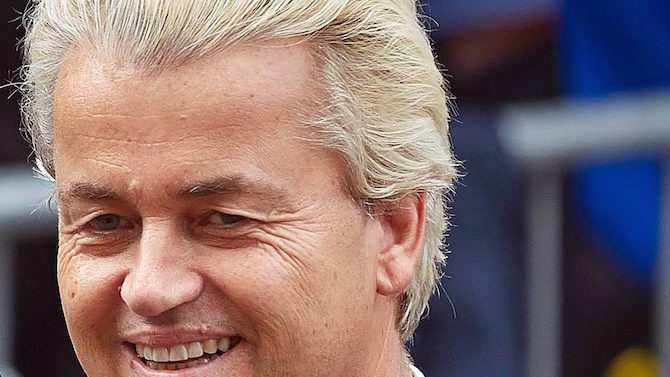 The Dutch political system may not have been deliberately designed to produce middle-of-the-road outcomes, but it certainly works that way in practice: many small parties, multi-party coalitions to create a majority government, perpetual compromise. It is almost impossible to radicalize a system like this, but Geert Wilders is going to try.

Wilders is the founder and leader of the Freedom Party (PVV), which currently holds only 12 seats in the 150-seat Dutch parliament. But he is aiming to make it the largest single party in the Mar. 15 election—which, in ordinary times, would probably give it the leading role in the next coalition government.

But these are not normal times, and the PVV is far from a normal party. It really only has one policy—stop the immigrants—and it is unashamedly racist and anti-Muslim in its rhetoric. Wilders recently called Dutch residents of Moroccan origin “scum.” He vows to close mosques and Islamic schools, ban the sale of the Koran and stop all further immigrants or asylum seekers from Muslim countries.

He is the Dutch Donald Trump, a provocateur who deploys the maximum possible nastiness in his campaign talk and his frequent abusive tweets. In fact, some people argue that Trump must have taken lessons from Wilders, who has been working this side of the street for at least a decade already, but the concept of convergent evolution probably applies. Populists are almost always racists, too.

Which brings us to the question that is most interesting for people who don’t live in the Netherlands. Can racism and xenophobia alone, without any help from economic desperation, persuade a traditionally liberal Western electorate to cast its values aside and vote for an authoritarian bully with an anti-Muslim obsession?

Trump had lots of help from economic despair. The key voters who gave him an electoral college victory last November were in the Rust Belt states: men (they were mostly men) who would usually have backed Democratic candidates, but switched to Trump because he promised to “bring back the jobs” and stop the non-white immigration.

There was certainly a large element of racial panic in the American vote. A survey by Zack Beauchamp of the opinion polling and recent academic research on the topic, titled “White Riot” and published on Vox Jan. 20, documented the argument that “the real sources of the far-right’s appeal are anger over immigration and a toxic mix of racial and religious intolerance.”

On the other hand, the Rust Belt states south of the Great Lakes, the former industrial heartland of the United States, are the places that have suffered the greatest job losses over the past few decades, which is why cities like Cleveland and Detroit are decaying and partly abandoned. And they are emphatically NOT major destinations for new immigrants to the U.S.

Trump himself always ensures that he hits on both immigration and job losses in his speeches and tweets, and he is the world’s expert on the fears and prejudices of his supporters. Could we perhaps speculate that, while his supporters say they are frightened about immigration and especially Muslim immigration, their racism is really driven in large part by their anger at the steep decline in the number of well-paid industrial jobs?

Of the six states with over a million immigrants—California, New York, Texas, Florida, Illinois and New Jersey—only Florida (where Trump won by a whisker) and Texas (which has voted Republican in every presidential election since 1980) voted for Trump. California, whose 10 million immigrants make up 27 percent of the state population, voted two-to-one for Hillary Clinton.

It would seem that, in the words of the old Phil Spector song, to know, know, know them is to love, love, love them (the immigrants), or at least not to fear them. Whereas Michigan, a Rust Belt state that voted Democratic in the previous six elections and where only 6 percent of the population are immigrants, voted for Trump.

In populist revolts elsewhere, the manifest racism and anti-immigrant sentiment that dominated in the opinion polls masked a deeper resentment about the loss of jobs. In the Netherlands, where unemployment is only 5 percent, Wilders is depending on racism alone, and he is not heading for a Brexit- or Trump-style victory. The latest opinion poll gives him just 15 percent of the vote.