I am writing because of your advice to “On the Fence,” which appeared in the Jan. 16 column.  I wanted to ask whether you had ever heard of the concept of slut-shaming?  It’s a way of perpetuating the all-too-rampant sexism and oppression of women that occurs in our society.  How it operates is
that women are shamed because of their sexual activity, whether real or perceived.  It’s the practice of criticizing women for sexual behavior that may or may not fall outside of gender or sex norms, and it can be pointed to as contributing to a culture of rape apology and victim blaming. I was very disheartened to read in your response to “On the Fence” that you so patronizingly dismissed the woman in question’s sexual activity as being in the past, so that meant it was OK.  Your reply seemed to indicate that if such sexual activity wasn’t a thing of the past then it might be worthy of being judged by the advice-seeker.  To suggest that a woman’s sexual behavior is something to be held up to scrutiny and evaluation at all reeks of slut-shaming, and is damaging to women and girls.  I’m frankly surprised that you would even entertain this and that you would perpetuate this sort of categorization of this person’s supposed promiscuity.
Furthermore, saying that you’re not going to go “all batshit feminist” on the “nice enough guy” is appalling.  No one is requiring you to say that you are a feminist, but you write a sex advice column, for God’s sake. You’re seriously going to suggest that only “batshit feminists” hesitate to condemn slut-shaming?  Or that “nice guys” don’t rape women, or degrade them, or insult them by scrutinizing their activities? Jyl, I’d like to give you some advice now.  Take some time to research what slut-shaming does to encourage a culture of rape and the acceptance of it. Take some time to read about how all those “nice guys” do appalling things, much of which begins with name-calling, or justifying their actions because a woman who is sexual is “asking for it.”  And be glad you have rabid feminists like me out there to call you, and those nice guys, out on that bullshit, since you didn’t.
Sincerely,
Marci Manglitz 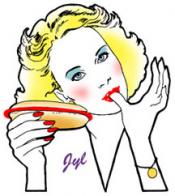 Hi, I’m Jyl. Perhaps you are familiar with my column? I have been writing it for over 10 years, during the course of which I have, in fact, read some things and lived a bit and you know—experienced the outside world—so thanks for questioning my “awareness” of slut-shaming. You are, in fact, the exact sort of person who I hold up as “batshit feminist.” A great example of why I distance myself from people like you, and why “feminist” can be such a loaded word. Of course I am a feminist. But I think that holding everyone to the same standard is what real feminism is about. If you had actually read my response with an open mind and some comprehension skills, then you would see that I did just that. I pointed out to this nice guy (he was nice enough, after all, to not immediately tell his friend that he thought the girl was a slut, right? Nice enough not to dredge up her past in an attempt to shame her, even though he was aware of her bad reputation?) that he had failed to note his friend’s sluttiness even after pointing out hers. You see how I did that? I lightheartedly mentioned that he should think about that, rather than giving him a speech about the patriarchy, because I believe that the best way to get people to assess their beliefs is through gentle nudging and patient inquiry. Unless they are assholes, in which case you should get in their faces.

You say that “To suggest that a woman’s sexual behavior is something to be held up to scrutiny and evaluation at all reeks of slut-shaming, and is damaging to women and girls.” Well, gee, that’s great if you’re writing a grad school paper on human sexuality for your Women’s Studies class, but this is a fucking advice column. This guy is trying to look out for his friend. He is not “degrading” this woman, or publicly judging her. He has some pretty compelling evidence that in her past she was not into monogamy, and he is trying to figure out if she is going to break his friend’s heart. And you’re giving me a speech about how “nice guys can be rapists, too!” (No shit!) If I were to read your letter as carelessly as you read my response to his, then I might conclude that you were accusing him of rape.

Let me ask you this: If this letter had been from a woman, and she was worried that her best girlfriend, who was never really serious about any guy but had slept with a bunch, had suddenly fallen for a guy that she knew had dated and dumped and cheated on a whole string of girls in their shared hometown, what would you think then? If I had said that this guy might have good intentions, might be ready to settle down, might be just the kind of reformed slut that this slutty friend needed and could understand, would you have even written this letter?

I can only assume from your very serious and heated response that you are a new reader and not at all familiar with my general beliefs or my writing style. If that is the case, then I forgive your insanely patronizing, knee-jerk response to my very straightforward advice. If not, then I can only say that seeing insult, injury and misogyny where there is none, crying foul at every perceived slight, and attempting to educate people who are quite familiar with actual injustice and in fact on your side will only alienate your audience.

Marci, I’m going to give you some advice now: Take some time to research what reactionary, uninformed letter writing does to encourage a culture of stupidity and the acceptance of it. Then come back and take some time to read words that I have actually written, and try to get to the meaning behind them. And be glad you have non-rabid, fully vaccinated feminists like me here to call you, and those other well-meaning loudmouths, out on your bullshit, since no one else obviously has.