Orth Stein arrived in Kansas City, Mo., in the fall of 1882. He was 20 years old. In four years he had made a reputation in Indiana and Colorado as a reporter, poet and artist. He was also famous as a journalistic hoaxer, a gambler, a heavy drinker and a thoroughgoing creature of the night, the companion of criminals and of women who worked in music halls and “variety theaters” like the one he had managed in Colorado. When Stein came to Kansas City he still suffered dizziness and headaches from a severe head injury received from an unknown attacker in Denver. He carried a .45 at all times and used the alias “John Bell” in private life and in his writings for the Kansas City Times, where he worked briefly before moving to the Kansas City Star. 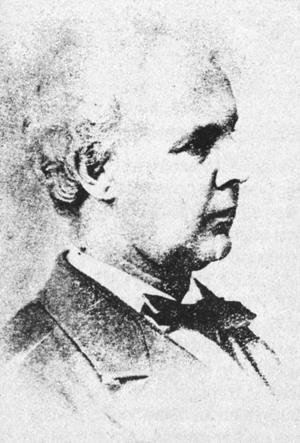 Stein soon became city editor of the Star and fell in love. The object of his affections was Mattie Hartlein, a large blonde woman two years his senior. Stein was not Mattie Hartlein’s only lover. For four years she had been the mistress of George Fredericks, a 40-year old married man who owned the Theater Comique, a variety house specializing in semi-nude dancing and serving as a meeting place for prostitutes and their clients.

Shortly after midnight on the morning of April 9, George Fredericks entered Mattie Hartlein’s apartment and found her with Orth Stein. A few minuted later a passerby heard a gunshot and a woman’s screams. A crowd found George Fredericks lying at the foot of the stairs shot in the back of the head. Stein was arrested and charged with assault with intent to murder. He admitted shooting Fredericks, but claimed that he shot in self-defense. He said that Fredericks was furious on finding him in Hartlein’s apartment and the he, Stein, proposed that they go out and discuss matters over a drink. Stein continued by saying that Fredericks had preceded him down the stairs, but had suddenly turned and put his hand to his hip pocket with a loud cry. Stein said that he assumed that Fredericks was armed and about to shoot him, so he pulled out his own pistol and fired. The police reported no pistol on or near the victim, a circumstance which, in combination with the location of Fredericks’ wound, looked very bad for Orth Stein.

Three days later Stein’s father John, a prominent Lafayette, Ind., lawyer, boarded a train for Kansas City with three other leading members of the Lafayette bar. By the time they arrived Fredericks had died and Orth Stein had been charged with first degree murder, for which Missouri law allowed only the death penalty.

John Stein retained two capable and expensive Kansas City attorneys and called on his wife’s brother-in-law to aid in Orth’s defense. Their trial strategy centered on destroying the credibility of the state’s chief witness, Mattie Hartlein, and on portraying the victim as a dangerous man. The jury received the case July 23 with instructions that they could find Stein guilty of either first- or second-degree murder, or acquit him on grounds of self-defense. The jury first voted seven to five for first-degree, then eight to four for second-degree murder. The majority prevailed; Orth Stein was convicted of the lesser charge and sentenced to 25 years in prison.

While Stein’s counsel appealed for a new trial Stein remained in the Kansas City jail where he accepted gifts of food and cigars from well-wishers, wrote short stories which were published in local papers, and made the acquaintance of of fellow prisoner Frank James, brother of the recently deceased Jesse. On Dec. 10 the Missouri supreme court overturned Stein’s conviction and ordered a new trial. On Christmas Eve 1883 Stein was released on bond posted by wealthy citizens of his hometown. He had nearly a year to prepare for his new trial, scheduled for Dec. 3, 1884. Stein returned to Leadville, Colo., and his old newspaper job. He soon left and went to seek work in Chicago. As his trial date neared he wrote his lawyers saying he was too sick to return to Kansas City. A sheriff’s deputy went to Chicago to help change his mind, and Stein was returned to Missouri in chains.

Trial was rescheduled for March 17, 1885. Stein’s lawyers continued their old strategy but produced new witnesses who swore that Fredericks had spoken of killing Stein. Most effective was testimony of two young men from near Stein’s hometown who had just happened to be in Kansas City and outside the apartment at the moment when Fredericks was shot. They also just happened to see what no other witness had mentioned, a pistol beside the victim, which they swore someone snatched up before the police arrived.

The jury split evenly on the first ballot, but by the fourth they were unanimous. Orth Stein was a free man. He returned to Lafayette with his family and resumed newspaper work, claiming that he intended to repay his father the enormous cost of his defense. John Stein had been broken physically and financially by his son’s troubles. On Aug. 14 he died, leaving his small estate, little more than a life insurance policy, to his widow, Virginia.

Orth Stein was 23. He decided he had worked on other men’s newspapers long enough to know the business; now he would start his own.