Impeachment Proceedings Against Trump Bring Back Memories of Nixon 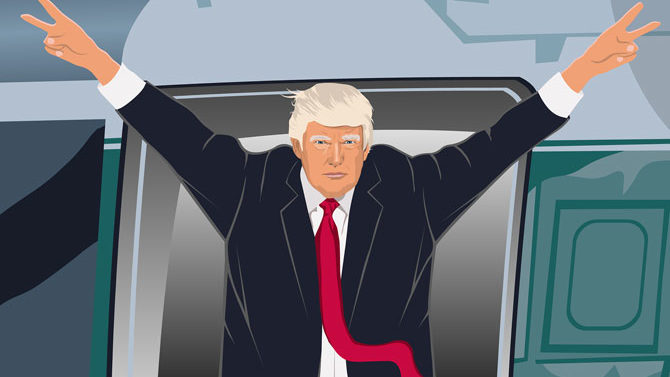 Storm clouds of impeachment are scudding over the White House in the wake of whistleblower complaints of corruption emanating from President Donald J. Trump and his Oval Office minions. Across America, calls for Trump’s impeachment are growing louder and faster than was the case during the Watergate scandal that led to the resignation of President Richard Nixon in 1974.

More than two years passed between the infamous Watergate burglary and Nixon’s resignation. Today, momentum for impeachment has grown speedily and steadily in the Democratic-controlled House of Representatives, which has the power of impeachment. To actually remove the president from office would require a vote of the Republican-controlled Senate, and that is not likely to happen as long as so many in the Senate show profiles in cowardice with their fawning fealty to Trump. When Trump’s nemesis John McCain ran for president as a Republican in 2008, he used the slogan “Country First.” Today’s Republicans on Capitol Hill put party over country with their rubber-stamping of Trump’s reactionary regime.

During Nixon’s Watergate criminality 45 years ago, Washington Post reporters Bob Woodward and Carl Bernstein used their newspaper stories and their book, All the President’s Men, to expose the crookedness of a president who had run for office on a call for “law and order.”  Today, in these times of Trump, the reporters who wrote All the President’s Men are warning America about all this president’s mendacity.

On Oct. 1, Bernstein compared Trump and Nixon by saying, “Both presidents wanted to undermine the very basis of democracy, which is free elections… Here’s the big difference between Watergate and what we’re seeing now: If Republicans are willing to go along with this, it is going to change our history, because Republicans became the heroes of Watergate who finally said, ‘We cannot tolerate a corrupt president who undermines our electoral system.’” Woodward concurred, saying on Oct. 2, “You need to look in a comprehensive way at everything in the Trump administration. There are lots of things that are hidden. The mistake will be if there is not a serious investigation into all of this.”

Nixon was riding high after his landslide victory in the 1972 election. His administration dismissed the Watergate break-in as merely “a third-rate burglary.” When Nixon spoke in Macon on Nov. 18, 1973, thousands turned out to show support for the president in that city, but strong voices of opposition were also heard. I was among a large group of dissenters there to protest the perfidy and policies of the Nixon White House. Nixon supporters’ chants of “four more years” often were drowned out by the voices of protesters countering with shouts of “five to life.”  Placards held aloft by protesters included such sentiments as “Make Georgia the Impeach State” and “The Emperor Has No Clothes.”

Just a few months later, I attended a march and rally by the National Campaign to Impeach Nixon that took place in Washington on Apr. 27, 1974. A spirited throng 10,000 strong marched through the nation’s capital hoisting signs saying, “Throw the Bum Out” and “Jail to the Chief.”  Labor activist Dolores Huerta of the United Farm Workers told the crowd, “We can’t afford to sit history out.” Longtime American dissident Dave Dellinger warned his audience that “Nixon tried to introduce a type of modified fascism to this country.” By August of 1974, Nixon was swept out of office by a bipartisan revolt against him. Republican stalwart and conservative icon Barry Goldwater brought Nixon the news that he faced removal from office by votes from both GOP and Democratic senators. Nixon resigned rather than face impeachment, removal from office and possible criminal penalties.

Once again, we live in a time when Americans cannot afford to sit out history. Donald Trump’s machinations pose a clear and present danger to our nation and our planet. In 1975, a year after Nixon’s resignation, I wrote in the Athens Observer weekly newspaper this warning: “Our country can fall into the jaws of a garrison state—if we let it.” That warning still applies today.