Measles Makes a Comeback, Thanks to Anti-Vaxxers 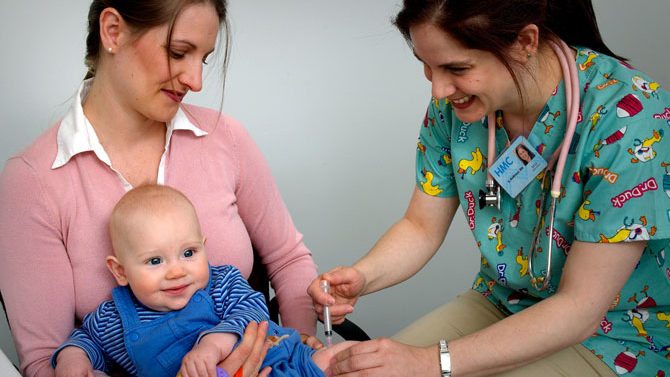 For those of us who were schoolchildren during the 1950s, lining up for vaccinations against childhood diseases was much scarier than the “duck and cover” drills that had us hiding under our desks in anticipation of a nuclear attack from Russian bogeymen.

One injection that even we kids applauded was the polio vaccine that debuted in 1954 and was in widespread use the next year. In the early 1950s, it was common to see polio victims—both children and adults—with braces on their legs or in wheelchairs. A U.S. polio epidemic in 1952 caused almost 58,000 cases of the disease, resulting in more than 3,000 deaths and more than 21,000 Americans suffering disability—including children that we saw in school and on the playground every day.

When Jonas Salk developed the polio vaccine, he was rightfully hailed as a medical hero whose research led to a conquest over a disease that had struck fear into the hearts of both children and their parents and that had afflicted an American president who had called for “freedom from fear.” Saying that this nation’s health care was a “moral commitment,” Salk called for mandatory vaccination against polio, and America agreed. When we schoolkids were given our “polio shots” some 65 years ago, we winced at the needle, as always, but we appreciated being protected from a dreaded disease that had affected classmates, teachers, friends and family members. In the dark days of the 1950s, Salk and his team scored a victory over fear.

Science was a wonder in the postwar America of the ’50s, and advances in public health were all a part of that magic. After Russia stunned the world with its Earth-orbiting Sputnik satellite in 1957, science gained new emphasis in America’s public schools, and general science courses taught millions of youngsters the basic tenets of the scientific method of observation, measurement, experimentation and testing that has been used as a scientific standard since the days of Galileo and Isaac Newton in the 17th Century. Salk fit right in at a time when science was revered and respected by millions of Americans. By the time of his death in 1995, diseases like polio and measles seemed to be afflictions from the past. Now, the good Dr. Salk would be sad to see measles making a comeback, as some parents resist vaccinating their children.

In a May 13 fortune.com article, Sy Mukherjee writes that the Centers for Disease Control in Atlanta reported that, as of May 10, there were 839 cases of measles across 23 American states—an increase of 75 cases over the previous week. So far in 2019, the article continues, there are more than 10 times as many measles cases across America as there were in 2010, when the disease had been nearly eradicated in this country, and most of today’s infections of measles are among the unvaccinated.

Measles is often thought of as a simple childhood malady, but it can have severe complications that make vaccination against it a wise precaution. Still, even in an age of science, there are many who fear vaccines more than they fear potentially deadly or debilitating diseases. Such “anti-vaxxers” run the political gamut from right to left, and they come from religious groups including conservative sects of Christianity, Judaism and Islam. The brother, sister and niece of liberal activist Robert F. Kennedy Jr. recently wrote an article in Politico saying that he is right about preserving the environment but “tragically wrong about vaccines.”

Today, it is fashionable in some circles to sneer at science, including medical science. Astronomer Carl Sagan scorned such nationwide scientific illiteracy as trouble for an America whose citizens are more and more dependent on science and technology. He called for science and citizenship to be respected by all Americans. “Sooner or later this combustible mixture of ignorance and power is going to blow up in our faces,” he warned more than two decades ago. “Our species needs and deserves a citizenry with minds wide awake and a basic understanding of how the world works… The dangers of not thinking clearly are much greater now than ever before.”