Trump Embodies the Opposite of Martin Luther King Jr.’s Ideals 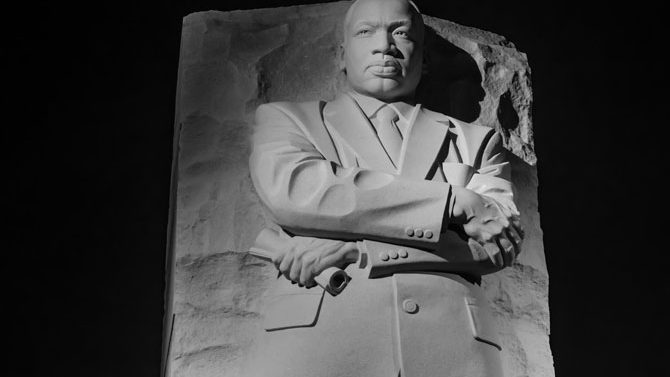 President Donald Trump and Vice President Mike Pence made a perfunctory, two-minute visit to the Martin Luther King Jr. Memorial in Washington on Jan. 21. They should have stayed longer.  On the day when Americans and people around the world observed the holiday honoring the birth of the slain civil-rights leader 90 years ago, Trump and Pence barely looked at the imposing memorial. Both men seemed even smaller than usual at the base of the towering statue of King.

On the CBS news show “Face the Nation” the day before the King holiday last month, Pence sullied the legacy of King by saying that the activist “inspired us to change through the legislative process to become a more perfect union. That’s exactly what President Trump is calling on Congress to do.” Within hours, King’s son and namesake, Martin Luther King III, fired back that his father was “a bridge builder, not a wall builder. Martin Luther King would say that love, not hate, would make America great.”

The words and actions of King show that he was wary of walls and weary from oppression in his home country and around the world. On a visit to Berlin in 1964, just a month before he was awarded the Nobel Peace Prize, King said that the Berlin Wall the Soviet Union had built to divide that German city was a dismal and depressing structure. “It symbolizes the divisions of mankind,” he told a reporter at the wall. “There are divisions that continue to exist, but when that is symbolized with an actual wall, it becomes very depressing.”

Later, during a speech in Berlin, King told a huge crowd of Germans, “Here on either side of the wall are God’s children, and no man-made barrier can obliterate that fact. Whether it be East or West, men and women search for meaning, hope for fulfillment, yearn for faith in something beyond themselves, and cry desperately for love and community to support them in this pilgrim journey.”

Today, Trump’s policies of shutting down the government to extort money for his American wall, separating children from their parents at the southern border, cozying up to Russia’s Vladimir Putin and packing courts and government agencies with henchmen bent on the destruction of America’s long legacy of reform would probably draw strong rebukes from Martin Luther King Jr. himself if he were still alive. A long-ago quote from MLK is as relevant during today’s times of trials, tribulations and Trump’s trumpery as it was when King first wrote it in 1963: “Nothing in the world is more dangerous than sincere ignorance and conscientious stupidity.”

Trump and Pence should have tarried longer at the King Memorial, then they should have paid a visit to Statuary Hall in the Capitol Building in Washington. There, they could have seen the likenesses of men and women of every race who have struggled through history to make America great and, in King’s words, to remind this nation to “live out the true meaning of its creed.” The Capitol’s statue of Rosa Parks honors a pioneering African American who is called “the mother of the movement” for her role in the 1955 Montgomery bus boycott that ended Jim Crow segregation on that city’s transit system and catapulted a young minister named Martin Luther King Jr. into national prominence.

Nearby in Statuary Hall is a likeness of 19th Century civil-rights champion and former slave Frederick Douglass, who said words that Trump and Pence need to consider today: “Those who profess to favor freedom, yet depreciate agitation, are men who want crops without plowing the ground. They want rain without thunder and lightning.” The current president and vice president also should have contemplated the statue of 1920s-era progressive politician “Fighting Bob” La Follette of Wisconsin, who said, “The supreme issue involving all others is the encroachment of the powerful upon the rights of the many.”

Trump and Pence didn’t stay very long at the memorial to Martin Luther King Jr. They should have lingered longer at the shrine, but perhaps both those small men felt uncomfortable standing in the long shadow of a martyred crusader for peace and justice who said, “If we do not act, we shall surely be dragged down the long, dark and shameful corridors of time reserved for those who possess power without compassion, might without morality and strength without sight.”