Fred Birchmore Pedaled the World and Lived to Tell About It 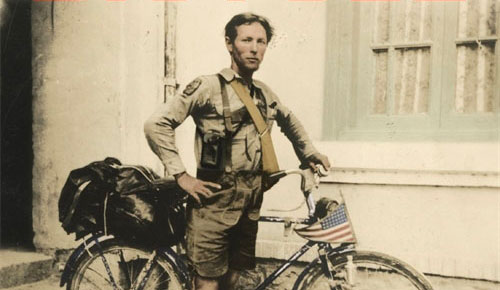 The UGA Press recently recycled the perfect antidote for all that ails us shut-in, worn-out, Trumped-up, beaten-down citizens in the gloaming of the year that was. Here’s a hometown hero who set forth on his bicycle and pedaled around the world just before it was engulfed in war.

In the mid-1930s, Fred Birchmore graduated from UGA with an MA and a law degree simultaneously and then eventually went to Germany to study international law. There, he bought a heavy, one-speed bicycle that he aptly named “Bucephalus” after Alexander the Great’s horse.

Birchmore began exploring Germany on his bike and then ventured on to Denmark, Sweden and Norway. Eventually, he did Switzerland, too, climbing the Matterhorn on foot, then pushing his bike over others of the Alps.

He took a holiday ride from Germany to Egypt (!), where his passport and his stash of traveler’s checks were stolen while he slept on the beach beside the Red Sea. By the time he got everything replaced, his school semester had already begun, so he headed east on Bucephalus. Eighteen months and scores of incredible adventures later, like Odysseus returning to Ithaca, Birchmore made it back to Athens, where he remained for the rest of his life—practicing real estate law, raising a family and immersing himself in the civic and charitable endeavors of his community, while taking time out to bike across the country and through Latin America and Europe.

You will see in this book, not surprisingly titled Around the World on a Bicycle, that Birchmore was eminently qualified for the rigors and dangers of his journey. He was an athlete with four years as a member of the UGA boxing team. He had an excellent education, as is evident from his writing, and he had a deep self-confidence and a belief in the better angels of human nature, perhaps instilled by the Methodist church he attended all his life.

Even so, Around the World chronicles unbelievable hardship and danger. Birchmore traveled on his bicycle (except to cross oceans, of course—even he was not that good a Methodist). Most nights, unless invited inside, he slept outside, wherever nightfall found him, whether mid-desert or deep jungle. And he encountered the native people wherever he went, meeting them on their own terms, even in regions where they had never seen a white man, let alone a bicycle. He traveled light (no tent) and he traveled cheap (no restaurants). No cell phone or GPS, either. Just his one-speed bicycle.

“It may sound silly and sentimental to some, but when one’s only companion during 18 months of awful, beautiful and horrible experiences is a bicycle, it becomes more than a mere inanimate piece of metal—it is a real friend. When I think of the thousands of miles of jungle mud, desert sands and rocky mountain sides my old ‘iron horse’ had to plow over; the scores of snow-blocked passes making its life miserable in my mad mid-winter dash through the Dolomites, Bavarian and Tyrolean Alps, and how, like old Job in the Bible, Bucephalus came through with colors flying—well, I just can’t keep from loving that old bicycle as a true friend much more trustworthy and ‘human’ than many human beings.”

One other point about the book, perhaps the most important: Fred Birchmore is a very compelling writer. He had plenty to write about, of course, and it comes alive through his writerly language:

“Next morning, after a hurried breakfast of popped rice, I plunged down the 25 miles of red, muddy trail, through icy rain and dense layer of cloud to Kentung, lying 3,000 feet below, in the midst of a beautiful valley cupped by concentric circles of cloud-enshrouded blue mountain ranges.”

And on and on like that for 353 pages, plus grainy black and white pictures he took along the way—not to mention his traveling companion for a while, his pet monkey, “Vociferous.”The UGA Press, which originally published Around the World on a Bicycle in 1939, has done us a great service by bringing it back. This hefty paperback would make a great gift for just about anybody because it is packed with death-defying true adventures told by a storyteller whose colorful prose invites us to be a part of all that he has met.

The People Have Spoken