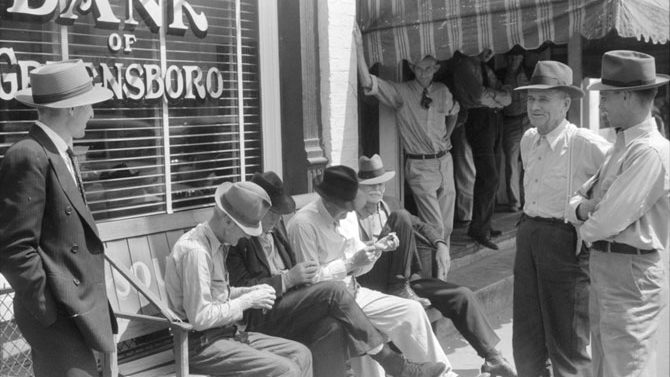 On Monday, Mar. 6, 1933, my father left Greensboro headed for Atlanta. He had a radio in his Chevrolet sedan, not common at the time, run from a battery installed by cutting a hole in the floorboard. The radio was because he was courting my mother, who, that afternoon as usual, would be at the drugstore after school with her fellow schoolteachers enjoying a “Boll Weevil,” which they called chocolate milk with a scoop of vanilla ice cream in a wry tribute to the scourge that had destroyed the cotton economy and plunged Greene County into economic depression well before the stock market crash. The teachers paid for their Boll Weevils with script, an IOU issued by the school board, which had no money for their paychecks.

On the way to Atlanta, my father heard on his radio that newly inaugurated President Franklin D. Roosevelt had issued an order closing the nation’s banks, the beginning of the famous “bank holiday.”

Roosevelt’s bank holiday was necessary because banks were failing all over the country, destroying confidence in the banking system and causing “runs” on banks when depositors demanded their money. My father was well aware of this phenomenon, because his family had been wiped out in an earlier bank failure. When the banks reopened, they were insured by the Federal Deposit Insurance Corporation, and people knew their money was safe.

Greene was a major cotton-producing county, though that crop had been in turmoil ever since emancipation abolished the free labor that fueled the economic engine that powered the country. Black laborers had eventually been forced back into share-cropping, a new kind of servitude, and cotton continued as the main money crop, despite the worn-out soil that demanded expensive fertilizers. Following a period of high cotton prices during World War I and the Spanish flu pandemic that killed three times as many people as the war, the boll weevil invaded and ruined cotton, adding the expense of poison to the requirements for making a crop.

As my father continued on toward Atlanta and my mother sipped her Boll Weevil, more help was on the way. “We’re from the government, and we’re here to help” carried none of the sarcasm spun by a later president. Crops had failed, farmers had no money to  pay off their loans or buy provisions. Banks foreclosed on their farms, many of which already sat abandoned and eroding. People, white and black, lived in tumbling-down shacks they had no money to improve. Roofs leaked, wind whistled in, along with flies, mosquitoes and rats. Children went barefooted year round, picking up hookworm.

There was skepticism within the county, especially among those who were still well-off, who had the cash to buy up the foreclosed farms. They hated Roosevelt. Governor Eugene Talmadge fought the New Deal, because he couldn’t control it for patronage, and he accused it of treating black people the same as whites, which it did, within the social limits of 1930s Georgia.

Federal programs stabilized Greene County, saved my father’s business, my mother’s job, the banks, the farms and the people who depended on them and on whom they depended to make a living. World War II brought back prosperity. People gradually quit relying on cotton. The economy diversified. Prosperity became the norm. A couple of generations later, nobody remembers how we got here. It becomes easy to say we don’t need the government anymore. Interestingly, nobody ever says they don’t need the FDIC. Nobody. Where would they be with all the bank failures in Georgia in the last decade? They do say they don’t need the Medicaid expansion, in spite of all the hospitals that have failed, because, you know, that only helps the poor.

Now that we are plunged into a crisis of staggering health and economic consequences, that long-ago microcosm of Greene County is writ large across the nation. We see again how a threat can be too devastating for local solutions, and we see, too, how those solutions can be manipulated for political gain and how the powers of the national government can be thwarted and deflected from the fight against the invasion.

Greene County had 50 cotton plantations where no one could believe what the Civil War would bring. Neither could anyone foresee WWI, the Spanish flu, the boll weevil, the Great Depression or WWII, even though the signs were there: war clouds, vulnerabilities to pandemics, one-crop farming, unbridled capitalism, the rise of Nazism. The scientific community, health experts, the World Health Organization knew another pandemic was inevitable. Those who controlled our response didn’t want to hear it and are still attempting to talk it away.

Having grown up amid all those tales from the Depression, I never thought I would follow in my father’s footsteps, yet here I walk, awaiting that government check that will enable our business to survive long enough to figure out how to proceed in the new normal, whatever that may turn out to be. These times remind us why we have government, especially why we have the Constitution, which replaced that earlier compact, the Articles of Confederation, which proved resoundingly that our country cannot survive without a strong national government. That’s not fake news. You could look it up.