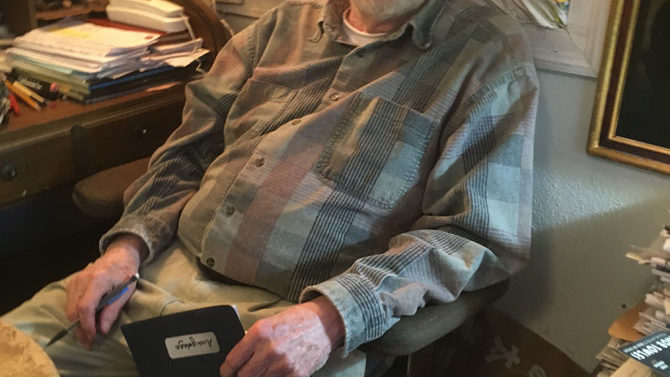 Peter Thompson’s delightfully jumbled Archipelago Antiques, down a flight of outdoor stairs, in the basement of a building across the street from the empty Earth Fare building, will soon be empty, too. Archipelago has fallen victim to the Five Points parking crush. A new sports bar is going in upstairs, and the Athens-Clarke County government requires that all the parking spaces in front of the building be designated for the bar. Thompson says the landlord and the bar owners have been respectful of his space and have charged him no rent during the construction upstairs.

Thompson has been at it 31 years. He was the 55-year-old head of the UGA zoology department in 1988, when he underwent quintuple bypass surgery and stepped down as department head. While recuperating, he started Archipelago downstairs Homeplace, which was owned by his friends Jim and Lane Norton and managed by his companion Lois Player. He later went back for a while to teach in his old department, but after a few more years retired for good. Since then, Archipelago has been his business, his hangout, his clubhouse, his reading room—where he enjoys the customers who come in and the friends who drop by.

Thompson is also an accomplished painter, and at times he has used one of the back rooms as a studio, as have other painters.

Between customers and visitors Thompson reads. He’s afraid he may be bored, away from the shop, but at age 87, he’s philosophical about the closing: “I sort of wondered how all this was going to end.”

Everybody is wondering whether there’s any chance of another grocery store going into the former Earth Fare space. The owners say yes, but.

“We all want to keep a grocery store in that space. We are exploring some good possibilities, but  our hands are tied right now because Earth Fare declared Chapter 11 bankruptcy. We are confident that we will find a good replacement for Earth Fare.”

Because of the bankruptcy, Earth Fare has to jump through some hoops before the owners can pursue the search for another grocery store in the building that housed Earth Fare and before them Bell’s. Here’s hoping Five Points does not long remain a grocery store desert.

You no doubt read in the Mar. 4 Flagpole City Dope that state reps. Marcus Wiedower (R-Watkinsville) and Houston Gaines (R-Athens) recently floated the idea of renaming Five Points in honor of former UGA tennis coach and sports raconteur, the late Dan Magill. Politicians lose no opportunity to align themselves with well-known and popular people, and Magill was certainly both and more. But as much as the denizens of Five Points might love Dan Magill, they did not relish the idea of having to rename their iconic intersection and some of their businesses (Dan Magill Bottle Shop?).

Wiedower and Gaines beat a hasty retreat and dropped the rebranding scheme, but maybe they just had the right idea in the wrong place. Since the Republicans drew their legislative districts so that Oconee County Republican voters have the upper hand in electing  these two guys, maybe they should honor Dan Magill out there. Surely, everybody in the county seat would be delighted to live in Magillville.

Friendly Five Points obviously continues to be a popular place to shop and eat, as witnessed by the winners in Flagpole’s recent Favorites contest. (See last week’s Mar. 4 Flagpole.) Five Points winners are: Avid Bookshop, Barberitos, Cale-N-Tito’s, Condor Chocolates, Donna Chang’s, Grindhouse Killer Burgers, Independent Baking Co. and Jittery Joe’s Coffee. The Favorites are selected each year by the votes of Flagpole readers, many of whom reside in Five Points.