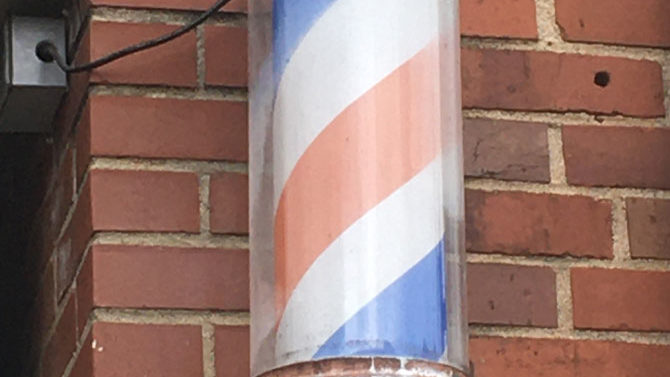 This month, the team members of Reconstructing Black Athens have been exploring slavery, segregation and racial inequality in Athens. This week, we turn our attention to Hansel Dillard, a 19th Century barber.

Hansel Dillard was born enslaved around 1793. Trained as a barber, Dillard advertised his services to white Athenians in the Southern Whig: “Barbering and Hair-dressing. Hansel Dillard, Respectfully informs the citizens of Athens and the public generally, that he will, at all times, be found at his Shop, happy to accommodate those who favor him with their patronage.”

Black barbers such as Dillard pressed sharp blades against the necks of white, slaveholding men.

“The ritual of white men being shaved by black barbers… illustrated the tensions at the heart of race relations,” notes historian Douglas W. Bristol.

Barbers directly challenged slavery and segregation. In an era that barred almost all free and enslaved men from skilled employment, barbers enjoyed steady, profitable work. Indeed, this profession paid well—Dillard’s earnings bought him freedom. As a free man of color, Dillard carved out a respectable space for himself in the slaveholding South.

“Black barbers competed against white barbers for white customers, and they won, dominating the upscale tonsorial market serving affluent white men. They formed close, if unequal, personal relationships with their customers that gave them unparalleled access to the white elite,” according to Bristol.

Dillard, according to the Weekly Banner, “made a great deal of money.” In addition to his barbershop, Dillard owned a bakery, operated a confectionery, kept a stable and ran a delivery service. For him and many other African-American men, barbering was a path to freedom and middle-class prosperity. Barbering allowed him to procure his own freedom, and he also purchased his wife’s freedom for $1,000. She, then, took in students’ washing for additional income. In 1851, Dillard owned property, and he paid taxes.

Sixty-year-old Dillard died of unknown causes on Sept. 5, 1853. He was buried in Athens. Exactly where, however, is not known. His body may have been interred in a family cemetery on private property. Or, perhaps, he was laid to rest in the racially segregated Old Athens Cemetery on Jackson Street. Indeed, numerous black men, women and children were buried in the least desirable sections of that flood-prone cemetery, most without a marker of any kind. And when rain came, bodies came unearthed. Municipal sidewalks and streets were widened in the 1880s and, as the Banner-Watchman reported, “Every heavy rain washes up human bones and pieces of coffins… The sidewalk is one succession of graves.” The white community disinterred and relocated the remains of some men and women—with or without permission from descendants. Such was an all too common experience for African-American families.

Weary of watching their loved ones buried and unburied and buried yet again, Gospel Pilgrim Society, a black benevolent organization, formed in Athens. Three years later, in 1882, this “Colored Lodge” came together to address a vital community need.

According to the Banner-Watchman, “The objective of the said society and the particular business it proposes to carry on are as follows: To look after and care for the sick, the indigent, and the distressed among their race; to see to it that that deceased among their number, as well as all others of their race, not otherwise provided for, are properly and decently interred.”

Gospel Pilgrim Cemetery, then, served an important role in the community. As one of the first black owned and operated cemeteries in the area, it gave former slaves and free people a space of their own in the Jim Crow South. It gave them a place to mourn their loved ones and bury their dead, as they saw fit.

At some point, years after Dillard’s death, friends from Charleston, SC, erected a tombstone in his memory. Though damaged by age and neglect, the stone, inscribed “I know that my Redeemer livith,” still stands in Gospel Pilgrim Cemetery today.

Recently, members of UGA’s Department of History have begun researching the lives and deaths of Athenians buried in Gospel Pilgrim Cemetery. We invite community members to contribute photos, documents or memories of the approximately 3,500 individuals who call this space their final resting place. Please contact Tracy Barnett: tracy.barnett@uga.edu.