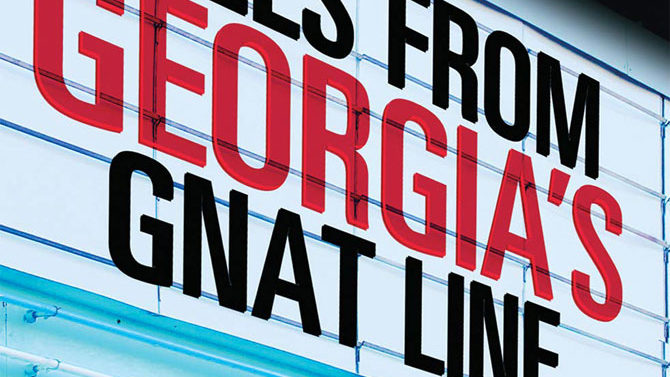 Late last spring, as I pulled into the Flagpole parking lot, I had one of those NPR moments. A mellifluous voice came on WUGA 91.7 FM, talking in the purest Georgia accent I have ever heard—not exactly patrician, certainly not Savannah, not mountain, not South Georgia—and I had to sit there until the interview was finished, to find out who this person was. It was an entertaining wait, because the man behind the voice was full of incisive and humorous stories.

He turned out to be Larry Walker, a name familiar to anybody who has kept an eye on the Georgia legislature over the years, a sort of legendary legislator who served 32 years in the House and was floor leader for several Democratic governors. In this interview, Walker was promoting his new book, Tales From Georgia’s Gnat Line, a collection of newspaper columns he had published in the Macon Telegraph.

May we assume that you are familiar with the gnat line, aka the fall line? It’s that geological edge of the Piedmont Plateau, running from Columbus to just below Macon to Augusta, where the terrain drops down and rivers run over shoals that make them unnavigable beyond that point. The fall line marks the farthest extension of the prehistoric ocean that covered half of Georgia (and may again). Below the line, the soil deposited by the sea waters is sandy. Gnats need sandy soil to complete their hellish lifecycle. Hence the gnat line. Below it, people move in swarms of gnats; above it, gno gnats!

Larry Walker lives in Perry, in Houston (Hows-ton) County, just below Macon on I-75. Perry sits right on the gnat line, so I guess their comfort depends on which way the wind is blowing. Walker is an attorney and has been for 50 years. He is a fourth-generation Perryean with a wonderful wife, Janice, four children and 10 grandchildren. He is, as he says in one of his columns, right where he wants to be. He was a leader in Atlanta and could have practiced law there. He has traveled and read widely and likes all kinds of music, especially the hymns he has heard all his life in the Methodist church. He hunts quail and fishes and always puts family and friends first. His paternal grandparents lived on an old farm in Washington County, where he visited in summers and saw them plow the land with mules, kill hogs, chop wood, build rabbit boxes and live a largely 19th Century life—a molding experience for a town boy like Walker. And Perry sounds like the ideal Georgia town for a boy to grow up.

All this background is to try to tell you what an entertaining evening we have in store this Friday, Oct. 11 at 6:30 p.m., when Larry Walker himself reads from and signs copies of his book at the firehall on Prince Avenue, under the auspices of Avid Bookshop.

Tales From Georgia’s Gnat Line makes you feel like you’re sitting on the porch talking with Larry about life and the interesting people who inhabit it. Since it is a collection of newspaper columns, you can dip into it for a quick pick-me-up of wit and candor, or you can read it straight through. Either way, you come to know a quintessential Georgian, the kind of person we’d all like to be, if we had paid better attention in school or worked harder and saved a little more.

Larry worked his way through UGA and law school, married his high school sweetheart, Janice, and went back to Perry to start practicing law and raise their family. He’s still at it, still where he wants to be and always eager to meet new people and hear their stories.

Dink NeSmith, local writer and newspaper magnate, who is an old friend of Larry’s and served on the Board of Regents with him, will introduce his friend and perhaps think to mention his own book, a just-published memoir of his growing up in Jesup, in his father’s funeral home, titled The Last Man to Let You Down.

Friday evening should be a great occasion in the firehall. I can’t wait to see Larry and hear him read in that sonorous Middle Georgia accent enriched by all that he has seen. I hope you will join us and see for yourself this man who has accomplished so much just by being lovingly immersed in the life around him. Seeing him in person will be the perfect preparation for reading Tales From Georgia’s Gnat Line.