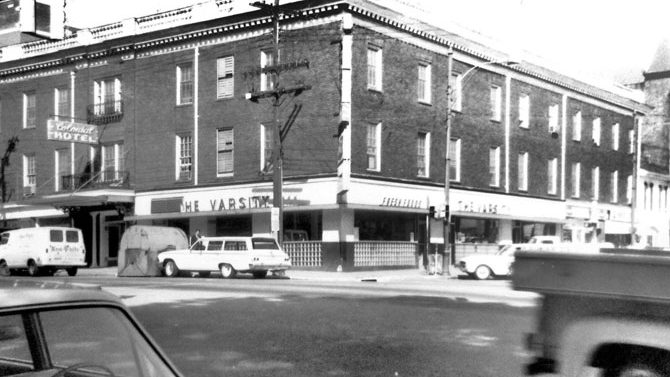 Having enjoyed high school together, my friend Sonny Thurmond and I arrived here for college and beheld the downtown Varsity, right there on the corner now occupied by Chick-fil-A.

I don’t know how to break this to you, but when we stumbled into The Varsity, it had the distinction of being absolutely the only emporium of fast food on this section of the planet. The Varsity was a mecca, an excuse for a long Sunday afternoon ride and a big plus bonus after any UGA football game we were able to attend.

Man shall not live by fast food alone, as our stomachs told us following our first week of chilli dogs all the way. That brought up the other problem that there just weren’t many places to eat in Athens, during that antediluvian epoch. Tony’s, on Clayton, where Amici is now, was about the only other downtown restaurant. The Snack Shack on Broad, where Holiday Inn Express is. Harry’s Drive-In, where Five Points Bottle Shop is now. No clubs, no bars, no coffee shops, no cell phones, no computers, no campus bus system, nothing except the ag school beyond the stadium. No bridge. If you had a class or a dorm over there, you had to go down the steps to the creek in front of the stadium and then climb the steps back up the other side. Women students got out on Milledge Avenue and hitchhiked between their dorms and North Campus.

Registration for classes was in Stegeman Hall, where the Tate Center parking deck is now. Classes were first-come, first-served. You had to stand in line and pick up a card for each class, and of course the required classes filled up fast. To have a fighting chance, you had to be out in the Stegeman parking lot around dawn, to get up toward the front of the crowd waiting to go in when the doors opened. It was my first experience in a mob. There were more people in that lot than lived in my hometown, and we were all jammed together so tightly that when the mob surged forward, you were lifted off your feet and borne along by the moving mass.

We were on the quarter system, and classes met every day. Final exams came before Christmas, so we started the new year back out in front of Stegeman, trying to get that freshman English class that closed out on you fall quarter.

Sonny was good in math and science, not so much in English. You needed a C average for the two required freshman English courses. Sonny had run afoul of the celebrated (and sardonic) professor Marion Montgomery and had barely escaped the first English course with a D-plus. This meant he had to make at least a C-plus in the second course, which we took together from the delightful but strict Tom Waller. It was touch and go, and Sonny came down to the wire desperately needing to make a good grade on his explication of the poem Dr. Waller had assigned him. I said I’d help. The poem was “The Subway,” by Allen Tate: “Dark accurate plunger down the successive knell/ Of arch on arch, where ogives burst a red/ Reverberance/ of hail upon the dead/ Thunder like an exploding crucible!/ Harshly articulate, musical steel shell/ Of angry worship, hurled religiously/ Upon your business of humility/ Into the iron forestries of hell…”

Neither one of us had ever seen a subway train, though that probably wouldn’t have made much difference in our joint efforts to understand what the hell professor Tate was getting at. We were smart enough to know that religion was mixed up in it somehow, but not what we had learned in the Methodist Church.

Sonny came through with a B, and he moved on with math and science to pharmacy school and a long and happy career as a pharmacist, far from “the iron forestries of hell.” And either one of us can still get a laugh just by uttering the word “subway.”

And that’s the whole point of college. The basic premise, no matter when you find yourself here, is to learn stuff, whether you think it will matter or not. You’re learning to use your brain to figure things out—with friends, who remain long after the facts fade.