The Infection of Racism Is Always in Our Bloodstream 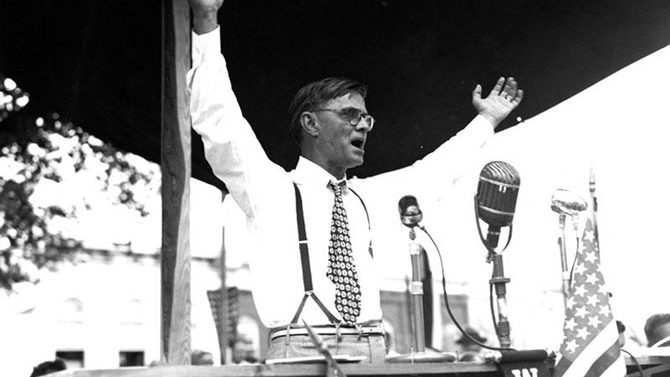 “You see that bluebird nest over yonder on that fence line?”

“You don’t see no blackbirds in that bluebird nest, do you?”

It was the summer of 1954, and Marvin Griffin was running for governor of Georgia, back when everybody was a Democrat, except for a few irrelevant Atlantans who called themselves Republicans (and our next-door neighbor and cousin, Anita Whitaker).

Marvin had been a loyal lieutenant in the Talmadge political machine that ruled Georgia in the mid-20th Century, and now it was his turn. He knew the drill: Run against the Negro, as those citizens were called by the Atlanta Republicans. Assure the crowd that none of those children were going to school with any bluebirds… er, white children. That’s all it took. That was the only issue, and Marvin was elected by the same counties that elected the Talmadges and their successors and recently elected Brian Kemp, who had the luxury that Marvin ‘n’ them never had: an opponent who was an actual woman of color (who almost kicked his pants, in spite of his eight-year control of the state voting system).

Having stood there on the courthouse square and heard Marvin, and Herman Talmadge before him, it certainly came as no surprise to me that Donald Trump’s popularity in the South spiked last week after he ran against the four congresswomen of color at his rally in Greenville, NC. Man, we love this kind of stuff down here. It’s what our daddies grew up hearing, and it sounds mighty good to our ears. That old Trump: He’s a good old boy! Damn! If you can’t lock ’em up, send ’em back. Whoa!

There were no people of color in that crowd outside the courthouse listening to Ole Marvin. They didn’t want to be there, and they weren’t welcome. Inside that courthouse, they had to drink from the colored water fountain. Inside that courthouse, they got colored justice, represented by white men in front of white juries. Their forebears were slaves to the white man, and that continued after the war and after emancipation, when they had no legal rights to enter into contracts and therefore could not work for a fair wage fairly paid, and they could not own land and continued on as sharecroppers, bound to the white man’s land and the white man’s pay. They could not enter the white man’s home by the front door, and their children could not attend the white man’s schools. Not being able to own property or own one’s labor meant the inability to accrue wealth, therefore nothing to pass on to the next generations. Insufficient schooling meant the inability to assure that children could advance beyond their parents in learning, in equality.

Prodded by the national government, the South over the years has made progress in employment, education and understanding. People have learned a lot about living together where race is an inescapable aspect of daily life. Our politicians have learned how to appeal to supporters of the old system without actually mentioning race in the stark terms Marvin and them used on the courthouse square.

In Georgia, we seemed to be learning to reach accommodations built on the reality that we need to get along, in spite of those who say it’s impossible, and that they don’t want to get along. Raw race-baiting was no longer welcome in public, and then, all of a sudden, it is OK again. Donald Trump has made it OK again, and look how quickly it came back into Georgia’s last governor’s race. Trump-surrogate Brian Kemp won it by championing “Send Them Back” (in his big pickup) long before Trump’s crowds began to chant it.

Now, thanks to our Chanter-in-Chief, our whole country is picking at the festering scabs of racism we had hoped to heal. Trump fingers a pulse that has never died out, bringing back those ghosts that have always haunted Georgia, inviting Eugene Talmadge to lurch again among us, calling out the badder angels of our nature.