Did We Miss Our Chance At Keeping Athens Athens? 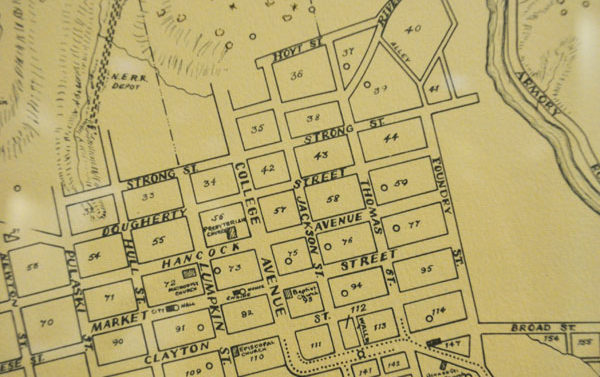 I wish I had President Trump’s knack for coming up with nicknames that stick. I thought I had one eight years ago, when I started referring in this column to the area between the Classic Center and the river as “LoDo,” Lower Downtown. At the time, I acknowledged that Denver has such an area, similarly situated and named, but I reasoned that Denver is so far out west that we could have our own lower downtown without causing confusion. As it turned out, there was nothing to worry about, because pretty soon we no longer had a lower downtown.

The idea at the time was that we had all that vacant land, some of it city-owned, that would be the natural place for downtown Athens to flow on downhill to the river and the greenway and the Firefly Trail.

For a while, there was serious consideration of the city using tax allocation districts and a bond issue as seed money to develop a kind of high-tech research park that would provide good-paying jobs to the kinds of people who want to locate near a university and would need food, drink, lodging, lattes and all the other amenities—sort of upscale Methodists, if you will. And, of course, the “Brain Train” from Atlanta would be pulling into the station right there at the multimodal (so far, unimodal) station right in the middle of LoDo.

The economic development folks were so serious about it that they got options to buy all the land except the large Armstrong and Dobbs parcel, but that was for sale, too. The city hired a consultant firm to look at the feasibility of all this, and they thought it was doable, but in their July 2011 report, the consultants warned, “The opportunity to develop the riverfront as a major employment center is lost if these 16 critical acres are converted to more student housing. A brief window of opportunity exists to achieve this vision.”

Ha ha! That window was slammed shut in a secret meeting. The Classic Center and its adjacent hotel closed off Hancock—the last flow-through street—and the area closest to downtown was converted to luxury high-rise student apartments.

I was reminded of all that by the news that Target will build a little urban version of itself at the corner of Broad and Lumpkin streets. I know Target is everybody’s favorite place to shop, but it also accelerates the homogenization of downtown Athens, and it wouldn’t be there if it weren’t for those luxury, high-rise students. Would it be there if, instead of the dorms in lower downtown, we had working people earning good salaries and maybe even hanging around for more than four years?

We’ll never know, nor will we know if that infusion of capital and production would have had a positive effect on all our Athenians currently living in poverty. Better to have businesses close to downtown and the university, or dormitories? Timing. Our present mayor, as a commissioner, was all for taking a serious look at developing that area for mixed use. The mayor we had at the time killed the whole idea. Now, the present mayor and commission are concerned about our poor and would probably be hip to maybe some semblance of job creation in what’s left of the area below the high rises, even though it’s blocked off from downtown now. (Can we call it NoDo?)

Augustus Caesar Hardin Jr., who grew up right in that very area when it was known as Lickskillet, always cautioned, “Ain’t no use to complain.” So, let’s not bemoan what’s done. Our present downtown is being increasingly retrofitted to the tastes of 19-year-olds from Marietta, but as we know, “the times they are [always] a’changin’.” Who knows? The university may quickly evolve more and more toward online distance learning, and those dorms may soon be available as affordable high-rise living for the people working the jobs that may yet get created down there in what we could go back to calling Lickskillet. We’ve got a mayor and commission now who are willing to think about such things.