Ort Paved the Way for the Athens Beer Scene 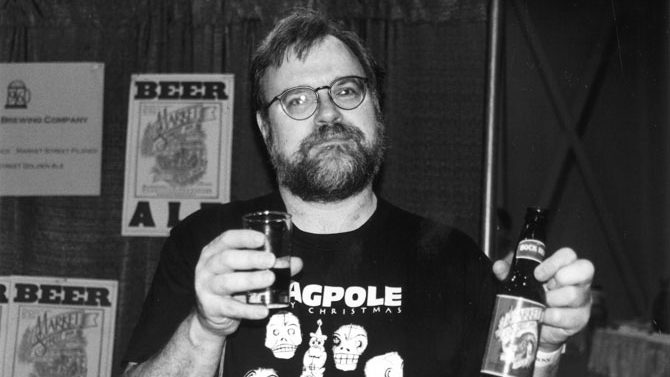 Most people in Athens of a certain age know William Orten Carlton, aka Billy Carlton, dba Ort—having grown up with him here, run into him, read him or read about him. Few probably realize that Ort, almost double-handedly, introduced Athens to good beer.

Let us return to that yesteryear of 1987, when Flagpole was conceived. A beer, at that moment in time, was a Bud or a Bud Light or a Miller or a Miller Lite. Maybe an Old Milwaukee. A beer at that time, compared to the panoply now available, was swill—a sort of beer-flavored, carbonated, bleached-out Kool-Aid.

To understand how Billy Carlton, grown into Ort, led the way to changing all that here in Athens, you’ve got to know a few things about the man himself.

He is obsessive. Ort doesn’t just like stuff: He embraces it; he collects it; he researches it and fills his vehicle du jour with it, until he can get it home and fill his house and outbuildings and mind with it.

Ort knows every newspaper ever published in the U.S., can tell you its circulation and what kind of press it was printed on (Goss Community, frequently). He can tell you the call letters of every radio station east of the Mississippi and their frequencies. He can tell you the location of every post office in every zip code on the Eastern seaboard, right down to little country stores, and he has visited many of them.

And, oh yes, thrift stores. Ort’s perfect weekend is to get into whichever of his vehicles is running and take a road trip. Sometimes, it’s just to Atlanta, but he visits every thrift store along the way and every diner and barbecue joint and every tavern with an interesting brew and always finds a low-priced, independently-owned motel, where he can avoid driving while under the influence of pork.

Did I mention records? Ort collects rare vinyl or just vinyl he hasn’t seen before, whatever.  He also collects beer cans. Not like your brother Herb’s pickup bed. Can-collecting is one of those things.

When Ort first started standing up for beer, all the local breweries all over the country that produced local brews with distinctive character were being squeezed out by the big boys—Anheuser-Busch, Miller and them. Beer, which had traditionally been a local product with a local flavor, was undergoing the homogenization of the corporate takeover.

Being a guy who liked to wander around and sample the local food and drink, Ort caught on to what was happening to the local breweries, and he started sounding the alarm, and he also started drawing local attention—in the pages of Flagpole—to beers much more worth drinking than the stuff the big corporations were foisting onto the palettes of unsuspecting local beer drinkers.

Ort also hung out with local guys who were brewing beer, and he championed every effort to make beer here. He celebrated the 1989 opening of The Globe and reported that they had only Guinness, Harp and Bass on draft, a revolutionary tapestry concatenation. He wrote a beer column in Flagpole that reported on every good beer found on his and others’ travels. He spotlighted every local place that served an interesting beer, and, when it came along, he faithfully showed up at Brew Fest and told us of everything he sampled.

Ort was there every step of the way, keeping an eye on it, writing about it in Flagpole, educating us to the possible, the preferable, the enjoyable.

All this is not to say that the beer scene here wouldn’t have happened without Ort. It would have. But Ort prepared the way. He educated us to what beer could be. He told us about the beers he had found elsewhere, and the good stuff here.

William Orten Carlton=Ort is a pioneer. He wrote in his Flagpole beer column of Aug. 9, 1995, “When I told people back in 1979—when the first micros were springing up—that it would be only a matter of time before fresh local beers and ales would be commonplace, even in the South, they just laughed.”

Now, we’re not laughing at Ort. We’re laughing with him.