Can the University Rectify Its Mishandling of the Slave Graves? 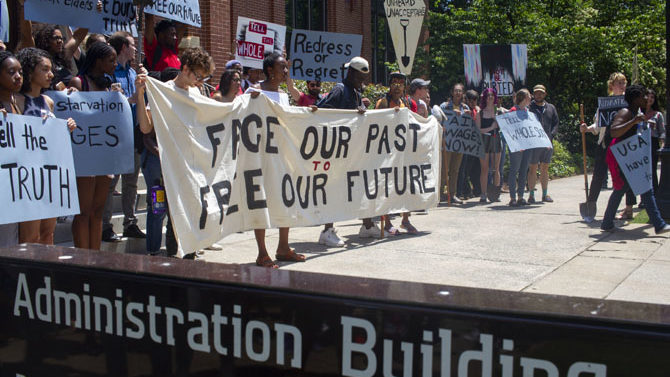 In the spring of 1970, I was arrested, along with 33 student protesters, in the offices of UGA President Fred Davison. I was there to lend my support as a faculty member and got caught up in the dragnet when the students were arrested. Seven of them and I refused to plead guilty in order to have the charges dismissed. We were tried twice and convicted of criminal trespass the second time.

Thus, I have a sort of déja vu reaction when I watch videos of campus protestors being threatened with arrest for criminal trespass outside President Jere Morehead’s office. I suppose they’ll keep it up until they’re arrested, and I suppose President Morehead cannot at this point say, “Hey, come on in and let’s talk this thing through and see if we can reach some common ground.”

The students are on a mission, and they don’t care that Morehead is the finger in the dike that protects the university from the tide of conservatism that would make our school more closely reflect the social, political, moral and religious views awash across our state.

Morehead may appear to the protesters as a staunch defender of the state status quo, but they don’t know who may be waiting in the wings, should Morehead stumble. Go to the board of regents website and see the credentials of those who oversee the university. Pay attention to the Georgia legislature, where right-wing Republicans control university appropriations. Remember our governor, who appoints the regents after a ride in his big truck.

It is too bad for all of us that this controversy has arisen. Maybe it had to be. Maybe not. The remains of African Americans, who were buried adjacent to the Old Athens Cemetery, next to Baldwin Hall, were discovered when Baldwin was expanded in 2015. Actually, “rediscovered” is the proper word, since remains first came to light in the 1930s, when Baldwin was built, although they were quickly disposed of then.

Because of the age of the cemetery, these are the remains of African Americans who were enslaved by Athens families and buried outside their cemetery. The old cemetery has always been hallowed ground. Outside it, not very much. And yet, those buried outside the cemetery were the forebears of Athens citizens, just as much as those inside. There is DNA testing available that could determine just whose ancestors they were.

If only. If only the university had said, “Whoa! This is a major find of great interest to citizens in Athens. Let’s find out who these people were.” That act of human decency could have catapulted the university into the front ranks of institutions coming to grips with the slavery that financed their beginnings while compromising their morality. Instead, the university reacted like a big bureaucracy trying to complete a construction project on schedule. They tried to keep it quiet. They tried to pretend those weren’t African Americans. They tried to pretend the state archaeologist told them how to handle it. So, they dug up all the bones and secretly buried them in Oconee Hill Cemetery. Later, they erected a monument acknowledging that these unknown persons were enslaved.

It would have taken some institutional courage to treat those African bones with the respect they are due, because not everybody in the universe that supports the university acknowledges that respect.

So, courage having failed, we are left with stubbornness. The demands have escalated far beyond respect for the dead to reparations for the living. President Morehead is caught between the protestors and those who control the university. The longer this goes on, the worse it will be for him and for the university, not to mention the protesters.

The crowd that showed up in President Davison’s office back then was on a mission, too. He thought he would appear weak if he sat down to discuss matters with them, so he didn’t. He kept on stonewalling every issue that arose, until one of them landed him in the lawsuit that ended his presidency.

Jere Morehead is a better president than that. He worked his way up through the ranks to head this university. Here’s hoping he has learned something that will help him figure out how to salvage this situation for the good of his school and his community, before somebody else does it for him.