Writers Discuss Our Region in the Chapel Thursday

Chuck Reece uses those words of Faulkner as the epigraph to The Bitter Southerner Reader, Vol. 1, a collection of pieces from the first couple of years of the online magazine about the kind of South most Flagpole readers feel at home in.

Reece is the magazine’s editor-in-chief, and in the foreword to the book, he attempts a definition of what the South is.

“If an understanding of Southern culture is what you’re looking for, I will suggest you must know two things deeply: okra (the vegetable) and Booker T & the MG’s (the band). Both demonstrate a central truth about our region: that the South has always been at its best when the many cultures and influences within it are allowed to combine.”

If your idea of the South is more than just whistling Dixie, you’ll be interested in a discussion taking place in the UGA Chapel at 4 p.m. this Thursday, Feb. 22. It’s a bunch of Southern writers talking about “Journalism and the Contemporary South,” brought to you by UGA’s Willson Center for the Arts and Humanities as a part of their Global Georgia Initiative. 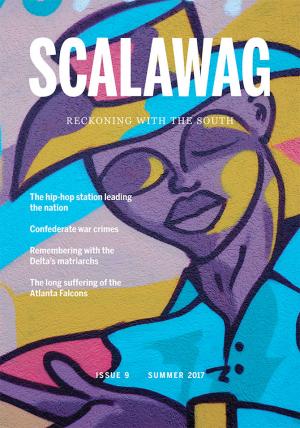 Scalawag is one of the Southern magazines represented in Thursday’s discussion.

Reece will be in on that discussion. So will Richard Fausset, Atlanta Bureau Chief, The New York Times; Valerie Boyd, writer and professor in the Grady College of Journalism; Eliza Borné, editor, Oxford American, and Alysia Nicole Harris, managing editor, Scalawag. I get a ringside seat by being included in the discussion, and the whole thing is moderated by Charles Davis, dean of the Grady College.

Dean Davis has a tall task, because these folks are all articulate and have a lot to say. The discussion could go on for several days, if allowed.

Since you read Flagpole, you’re probably familiar with some of these other publications and with the fact that there are a lot of people doing their best to embrace the South in all its aspects good and bad. In spite of our divisive politics, a lot of people in the South are looking at what we have in common, rather than what drives us apart. Come to find out, there’s a lot more than you would think: food, drink, music, art, writing, family, work, love and a natural world of ocean, rivers, swamps, woods, mountains and climate, plus a common language, spoken—with many variations—in a common accent. (Fausett brings the perspective of the working reporter covering school shootings, hurricanes, elections, protests—experiencing the immediate reality of the South from day to day.)

These are the subjects frequently addressed in the publications represented in Thursday’s discussion, and I think there is another common thread tying the participants together. I think we all grew up in the South and then, at some point, spent some time away from our region. This gave us a perspective that helps clarify our present view of our homeland. To live as a Southerner, for instance, in New York City, can allow one an inkling of the prejudice against who you are and where you’re from that is an everyday experience for many Southerners who never have to leave home to experience that. Living outside the South also gives you an intense realization of how much all Southerners of every race and gender share, whether they know it or not.

Oxford American cranks out a plethora of great writing about the South every quarter, as does Scalawag. Look at them online or get them into your hands, and you’ll quickly realize that the writing makes the difference and draws us in to a closer understanding of the place where we live. I heartily recommend these publications to you. You will be reassured by their determined efforts, through good writing, to make sense out of our conflicted region by seeing it clearly and seeing it whole, or, as The Bitter Southerner puts it, “For the sake of the story. For the love of the South.”

This Thursday, Feb. 22, at 7 p.m. in Ciné, Karen Hays reads from her essay in the new issue of The Georgia Review, “In Harm’s Way,” her account of being terrorized for years by a writer-stalker. Review managing editor Jenny Gropp says of this essay about the kind of psychological torture experienced by many women, “I think it’s likely one of the most salient pieces of writing I’ve ever worked on in my entire career.”