Athens is a ghost town. Beneath the outlines of our buildings stand their predecessors; behind current citizens lurk those whose lives continue in street names and in the dim recognition that something happened, somebody did something, back there, back then. We live in the present, but we also inhabit multiple dimensions, never quite sure which buildings stood where, who built them, who lived, worked and died in them, surrounding us still with their presence, if only we could decipher it. The unexamined life is not worth living; the unexamined town is not worth living in.

Who we gonna call? Athens has always had its ghostbusters—men and women who persevere in resuscitating the past. Considering the fact that their provence is demolished buildings and vanished citizens, you would expect our investigators to be a morose lot, but in fact, they are just the opposite. They see a city we cannot; they delight in characters we’ve not met. They are full of stories of the grand and the simple folks who have preceded us down these streets, whose histories we unknowingly repeat, and they take the greatest pleasure in sharing what they know.

With all their unaffected pleasantries about the past, these are people who have through hard work and concentration learned how to read the faint palimpsests that reveal who we are, who we have been. Mostly, they have written and lectured and published to share their hard-won knowledge; sometimes, they have risen up and prevented the destruction of a treasured landmark: the Church-Waddel-Brumby House, the Franklin House, the Taylor-Grady House. 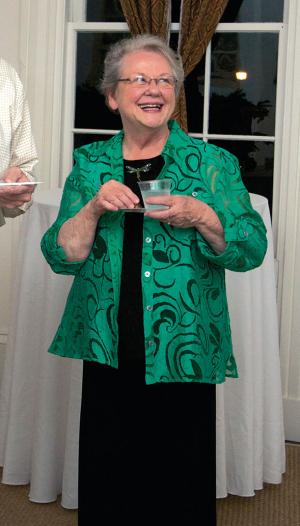 This past Sunday they gathered to honor one of their own, one of our own, who exemplifies an easy familiarity with the past won by long, laborious efforts in libraries, courthouses and archives, through a lifetime of puzzling out the past.

Charlotte Marshall, since she came to the university from Donaldsonville and stayed on to marry the popular and learned professor of English  George O. Marshall, Jr., has personified the grace and charm that help us learn to want to preserve our heritage. Charlotte, with all her hard work and incredible attention to detail, somehow also makes preservation fun.

She has been writing about Athens’ past pretty much ever since she has lived here, but you might say she made her bones with her massive Oconee Hill Cemetery of Athens, Georgia, Volume I. If you have the strength to lift that tome, you will see immediately how graciously Charlotte credits all those who have taught her skills, shared their knowledge and their collections, introduced her to kindred spirits and generally let her stand upon their shoulders to reach the fruits of her own researches.

Charlotte rewarded their support by chronicling every grave in Oconee Hill, turning what could have been a mere listing into a biography of those who sleep upon the Hill. While resting before beginning the future Volume II, to chart the remainder of the cemetery beyond the river, Charlotte took over as editor of the history that became The Tangible Past in Athens, Georgia, another blockbuster and treasure trove that opens our past.

So it was that on Sunday, in the Richard Brevard Russell Library, the Athens Historical Society presented its highest accolade, The Augustus Longstreet Hull Award, to this most fitting of recipients, Charlotte Thomas Marshall.

This is a high honor, indeed, for Augustus Longstreet Hull was one of our early observers of the Athens scene, whose Annals of Athens is a seminal classic recently re-published by one of Charlotte’s mentors, Mary Bondurant Warren. Mr. Hull clarified and extended observations of Athens begun by his father, Dr. Henry Hull, whose sketches were first published in The Southern Watchman, an Athens newspaper of the time.

So it goes that the dead hand it forward to the living, providing us some inkling of what all we have lost. Perchance, we appreciate what has been retained and steel our resolve to hang on to what we still have.

The Athens Historical Society fights our forgetting and inoculates us against a civic dementia that would shut off our collective memory. The Society aptly honors Charlotte and all those who have added their expertise to her eager energy to learn and to teach. Charlotte is herself a local treasure well deserving of the Hull award. Of what she has already shared with us and what is to come, she would no doubt echo Hull’s concluding sentence: “If the thoughts awakened by these annals shall give the reader as much pleasure as they have given the writer, then both will be content.”