Should Athens Mess With the Market? 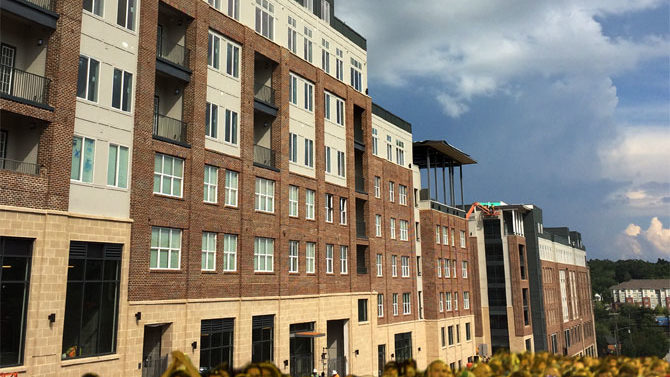 Wes Rogers, President and CEO of Landmark Properties, has won an award for Southeast Entrepreneur of the Year 2017 in the field of real estate and construction. Landmark Properties built The Standard, on Strong Street, adjacent to downtown, and is racing to finish The Mark, the 1,000-bed student high-rises on the old Armstrong and Dobbs property in the vast triangle between East Broad and Oconee streets. In other words, Rogers is the man when it comes to the luxury student apartments that are already having such an impact downtown. As stated at his award ceremony, “This year’s winners represent a diverse group of leaders who dare to see past the present to define the future.”

My old friend and fellow Greene Countian Jamie Boswell deserves an award, too. As the commercial Realtor handling the sale of the Armstrong and Dobbs property, he endured years of controversy and aborted deals before finally delivering for his client and himself.

And Jamie’s friend Mayor Nancy Denson deserves an award; she headed off an innovative local government proposal to develop a creative river district of high-tech offices, along with restaurants, shops and residences—thus keeping the area available for the student high-rises.

I’m sure Wes, Jamie and Nancy would say government shouldn’t mess with the market, and as it turned out, the market decided it wanted high-rises rather than high-tech.

It’s an old conundrum and always will be. The government certainly messed with the market when the Georgia legislature sent the Trustees up here on horseback to select a site for the university, much to the delight of Daniel Easley (local entrepreneur of the year 1801), who didn’t even know he had a market until they came riding up. Ever since, UGA has created the market, and we local folks have done whatever we can to profit from it.

We have had other big governmental interventions in the market here, some better than others. In the 1960s, backed by the national government’s Urban Renewal program, the City of Athens tore down African-American homes in the area where The Standard is now, as well as those occupying the land where The Uncommon looms and, among other areas, Baxter Hill, where a stable African-American community was replaced by high-rise UGA dorms.

Also in the 1960s, the City of Athens accepted another national government program, Model Cities, that rehabilitated infrastructure in East Athens and brought citizens into the decision-making process. And, of course, our state government’s Hope Scholarship subsidizes the luxury student high-rises by lessening the burden of tuition.

So, given our background and our reliance on state and federal government support of UGA, we can’t just say leave the market alone. We all know that nearby cities like Greenville, Asheville and Atlanta have greatly enhanced their liveability and their economies through local government programs and partnerships.

The salient point is: Who will “dare to see past the present and define the future” here in Athens? Lately, that has been Wes Rogers, rather than the citizens of Athens, and it looks like the future of downtown has pretty much been determined. An era of funky charm, of the do-it-yourself local businesses that created the music, club, art and restaurant scenes, is beginning to give way to a more homogenized, Atlantarized vision dictated by well-to-do kids who want to enjoy their familiar national chains here until they return to live in Atlanta.

All university towns are experiencing the growth of intown student apartments, and all music towns face the pressures that make it increasingly difficult for their musicians to survive.

Our town still suffers serious issues of poverty that were exacerbated by Urban Renewal and not eliminated by Model Cities—poverty that is perpetuated by UGA wage structures.

Does our government continue to keep hands off and say, “whatever; leave it to Wes,” or can we regain control of our city and let our citizens decide Athens’ present and future?

These issues should be debated by the Mayor and Commission and by candidates for those positions in the coming year. The market is a powerful force for economic growth, but only government can look after the interests of the people—when it will.