Historic Rural Churches Is Another Handsome Volume About Georgia 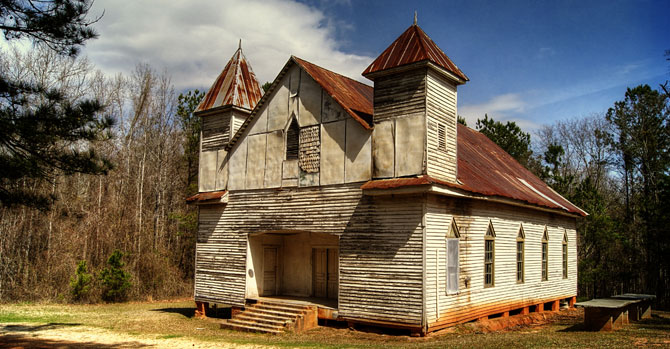 Two Atlanta guys, Sonny Seals and George Hart, enjoy getting out and driving the back roads of Georgia—thanks to the tolerance of their wives. As they drove and looked, they couldn’t help beginning to notice the old churches, many of which are no longer in use and are in various stages of falling down and fading away. The two city slickers, with their own family roots in rural Georgia, felt that they had stumbled onto a very important, vanishing link with the past out of which modern Georgia was created. They realized that these old church buildings are palpable palimpsests for the history, architecture and community of our state, not to mention its religion.

Those old churches and Georgia citizens were lucky that Seals and Hart happened by, because these two can-do guys decided to do something about these historical artifacts—many of which fortunately are still thriving and tended by their congregations.

In addition to publishing this handsome UGA Press book, Historic Rural Churches of Georgia, Seals and Hart have founded a nonprofit called Historic Rural Churches of Georgia, and they started a website, hrcga.org. This fall, Georgia Public Broadcasting will release a documentary, Saving Grace: Georgia History Through the Eyes of Her Rural Churches, and the Georgia Department of Economic Development is working with the non-profit on a historic rural church trail. In addition, a series of preservation projects is planned to assist and collaborate with communities to help preserve these historic churches. Obviously, Seals and Hart aren’t just church-huggers.

Historic Rural Churches of Georgia has a foreword by President Jimmy Carter, a preface by Seals and Hart telling why they did it and an informative introduction about early religion in Georgia by Mercer University historian John Thomas Scott. It also has some cool old maps of Georgia and excellent, evocative photography by a group of volunteers.

The book is, in fact, dedicated to those photographers, and well it should be. Their work enriches the book, and they were given the space to capture exteriors against soaring cloud formations and also to linger over interiors and details such as beautiful heart pine wood grains illuminated by afternoon sun and adjacent graveyards that witness to the centrality of the churches to the lives of their adherents.

Erin Kirk New’s elegant design uses the large format well and enhances the plethora of pictures with just enough text of sufficient size to tell this multilayered story without keeping the congregation overlong.

Historic Rural Churches of Georgia frankly acknowledges that frontier churches were built on land taken from the Creeks and Cherokees, and that many of the churches were built from the labor of slaves, who were allowed to sit in balconies built for them in quite a few of the older churches in this book. Several of these churches were indeed built for their own worship by former slaves, and Scott traces the rise of evangelicalism in Georgia among both black and white congregations prior to and after the Civil War.

They couldn’t get all the old churches into the book, so if you miss a favorite, go online, where you’ll probably find it in the expanded catalogue.

This big, beautiful, informative book is well worth its price at $45 and is a fine gift for anybody interested in Georgia and how it came to be.

Scott sums it all up in the conclusion to his introduction: “Many churches that have survived no longer have functioning congregations, much of rural Georgia having migrated to urban areas in the late 20th Century. Nevertheless, the buildings that remain testify to the commitment, variety and endurance of Georgia Christians, white and black, rich and poor, sophisticated and simple. Georgia’s churches also reflected and reflect the rich, complex and often painful history of the state in its first century and a half.”