Piedmont College: Out of the Hills of Habersham

The recent graduation season reminds us how rich Athens is in higher education, and it’s more than just UGA. We even have a couple of intown schools located along Prince Avenue. I have learned to be careful about claiming our medical college, which is housed on the former Navy School campus. That facility only exists in partnership with the Medical College of Georgia, which is a wholly owned subsidiary of Augusta University, until recently known as Georgia Regents University and extremely touchy about making it clear that the medical campus here is just an outpost of Augusta.

Piedmont College, on the other hand, seems to have no identity problems with its Athens branch. Piedmont was founded in Demorest in 1897 and has been in Athens for 20 years, now occupying the campus formerly inhabited by Prince Avenue Baptist Church. The college seems to be growing here, but without the church’s unfortunate penchant for tearing down old houses in order to expand.

Piedmont has an interesting history up in Demorest, a beautiful mountain town now an easy drive from here up Highway 441. My wife Gay’s family moved there from Clarksville when her father was a boy, so that the children could attend school at Piedmont, which at that time included the lower grades in addition to the college. Gay’s grandfather ran the college farm, and her Aunt Mary after graduating from Piedmont eventually came back and taught mathematics there until she retired. 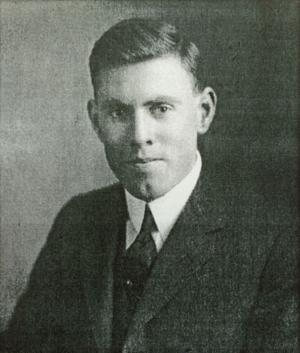 Wendell Brooks Phillips gave most of his adult life to Piedmont College.

A couple of months ago, Milton Leathers, a walking college in his own right (somewhat heavy on the history courses), whose wife Kammy works at Piedmont here, showed up clutching a little volume, The Piedmont College Trilogy, compiled on the occasion of Piedmont’s centennial celebration. The Trilogy is apparently something of a rare volume and includes reprints of three articles published in The Atlantic Monthly in March 1932, March 1933 and September 1935. These articles were written by Wendell Brooks Phillips, who taught English at Piedmont College from 1917–1935. Phillips grew up in Demorest and got all his education in Piedmont’s schools (his father was a founding trustee) before going to Harvard for graduate study. After finishing Harvard, Phillips was offered a job teaching in a Boston college, but he chose to return home to Demorest and to Piedmont to teach the mountain children he knew so well.

And that is the point of the Trilogy, the first article of which is “I Teach in a Hick College.” In that first Atlantic piece, Phillips laid out the importance of a school like Piedmont to kids in an area like the north Georgia mountains. In his hands “hick” loses its pejorative connotations and stands for fresh, eager minds longing for an education unavailable to them except at their homegrown college where they can work their way through. Phillips describes those kids in the second Atlantic article the next year, “Students in a Hick College.”

Phillips’ students are not hip or cool and are fettered by provincial upbringings but willing to learn and grow. They are closer to life’s real values by being further from its fads. His use of “hick” is therefore somewhat ironic, especially since his hick college is the same one he attended and where he chose to teach. But, and you could see it coming, just like a snake-handler who finally gets bitten by the serpent, that hickness rose up and sank its fangs into Phillips. In defending his students, he found it necessary to show that their greatest limitation came not from their backgrounds but from their college trustees, a narrow-minded bunch whose fundamentalist religion stood in the way of the free inquiry necessary to real education. Thus the final article, three years after the first: “I Was Fired from a Hick College.” Yep, they got him. After 20 years teaching and a lifetime of devotion to Piedmont, Phillips got sacked.

Of course, that was a long time ago. The modern Piedmont College mission reaches far beyond the mountains to attract a widely diverse student body taught by a cosmopolitan and sophisticated faculty in a variety of disciplines.

Here’s hoping that Milton or Piedmont or somebody will republish the Trilogy, because it raises a lot of pertinent questions about what education is. These questions are still important today, when the intellectual beliefs of the University of Georgia Board of Regents are probably not that far removed from those of the Piedmont College trustees when Phillips was teaching there. The freshness of those mountain students might be instructive, too, at a time when a lot of kids are too cool for school, and we’re all dependent on a hick legislature.