Several More Reasons Why It’s Great to Live in Athens 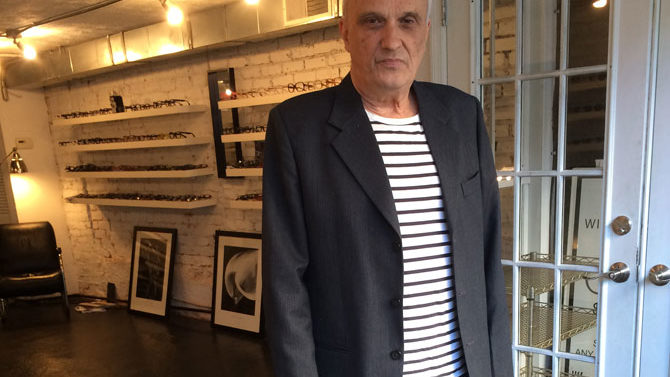 Looking for a new place to live, Jim Adams drove into Athens in 1975. While he was stopped for a traffic light on Broad Street, he watched a guy come down the Jackson Street hill and zoom through the intersection standing on his hands on a skateboard.

“This is where I want to live,” Jim instantly declared, and he has been here ever since.

He recalled that moment last week while tending store at Adams Optics on, yep, Jackson Street, where he can watch through the big window if anybody zooms down the hill on a skateboard.

Jim’s friends on the street and on Facebook know that he is recovering from a freak ordeal that began when he stepped out of the shower on a Sunday morning early in January and noticed that his skin was dry. He grabbed a bottle of Publix lotion and applied some to his legs and chest. Glancing in the mirror, he saw red streaks where he had applied the lotion. Then he passed out, had a seizure, cut his head open and broke his foot. After 30 days in the hospital and rehab, Jim is back at work wearing a boot on his left foot.

Sitting, chatting in Adams Optics, Jim says, “This whole thing has taught me the value of family and friends. That’s all that matters. An experience like this really makes you realize what’s important.”

Adams Optics is the very personification of the small, locally owned downtown business, which also happens to have cool glasses at even cooler prices. Jim Adams knows, too, as much as anybody that it’s a continual struggle for a small business to survive downtown, and rising rents forced him to move around the corner to his present location after decades on Clayton Street. He summed up his concerns for downtown businesses recently on Facebook:

“Tonight I grabbed my crutches and hobbled the two blocks to The Globe, where I totally enjoyed fish and chips while listening to the great Irish band that plays every Sunday from 4 p.m. ‘til 7 p.m. In short, I didn’t know a single soul in the packed restaurant, but I couldn’t care less. It was magical. It was real. And I thought that thank God there’s still a few things left in Athens that are still real. Like Marvin’s Shoe Service. Like Add Drug. Like Normal Hardware. Like The Manhattan. Please don’t take these for granted. Jackson Street Books was real. So was George Dean’s. Lumpkin Café was real. Remember Barnett’s and Schoolkids Records. I’ll shut up. Happy Valentines Day.”

An Athens (and National) Jewel

Nicholas Allen is another reason to love what’s happening in Athens. He is the director of the Willson Center for Humanities and Arts at UGA, where he is ably assisted by a skilled staff that includes former Flagpole City Editor Dave Marr. (Don’t miss his new CD, We Were All in Love.)

Last Thursday, the Willson Center hosted another speaker in its Global Georgia Initiative, the author and historian of Southern arts and culture William R. Ferris. Ferris is Joel R. Williamson Eminent Professor of History at the University of North Carolina at Chapel Hill and the senior associate director of UNC’s Center for the Study of the American South. His presentation was drawn from his new book, The Storied South: Voices of Writers and Artists, which, at first glance, appears to be an incredible collection of interviews with a who’s who of the South’s creative minds. Ferris appears to know everybody, and that included most of the people in the auditorium at the Georgia Museum of Art Thursday, including Jim Cobb, Judy McWillie, Art and Margo Newmark Rosenbaum, Hubert McAlexander—not just knowing them but knowing their work and counting them as friends.

Ferris’ lecture was enhanced with photographs and video recordings of some of his subjects, and by gosh his book has both a DVD and a CD stuck in a little pouch in the back, making it a great bargain at $35. I highly recommend it, if you can stand being made to feel that you have wasted your own life. Next up is Harvard historian Sven Beckert, speaking in the Chapel (free) Thursday, Feb. 25 at 4 p.m. on “Empire of Cotton: The Global Origins of Modern Capitalism.”

This is just the kind of stuff The Willson Center does all the time. Ferris called The Willson Center a “jewel, not only for the University of Georgia, but for the country.” And he should know, since he is familiar with so many of our brightest minds. One of these is Nick Allen, who brings this creative richness to share with us in Athens. He’s the intellectual equivalent of that flamboyant skateboarder and also makes us glad to live in Athens.