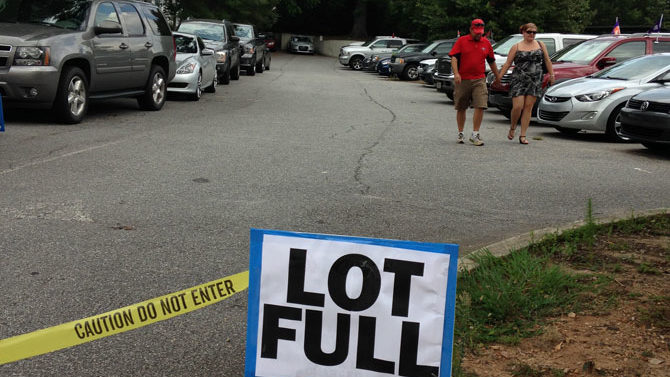 For the last two seasons, Flagpole has had pigskin in the game as far as Georgia football is concerned, and like most every other business in Athens, we have been affected where the rubber meets the road.

Last year, when the first football season rolled around at our Prince Avenue office, it dawned on us that we could make some money charging for parking during games, even though we were right next door to the large and well established football parking operation run by St. Joseph’s Catholic Church.

Last season, the question was not if we would sell out but when—what time the lot would fill up and we could go home. For the Auburn game we even had a gigantic motor home that took up four spaces and accommodated at least 50 Auburn fans. Fortunately, they were disappointed by the game but not by the parking.

Then, with the last game of the season, arch-rival Georgia Tech, few fans showed up at our lot. Sure, we sort of overpriced it—I mean, come on, free enterprise and all that—but how could we not fill up for the Tech game? Well, South Carolina took the wind out of our sails early, and then Florida beat us, as usual, so we hardly parked anybody to watch Tech beat us.

This year, even with some patsy teams scattered in there, we were doing OK until the rains came in on that Crimson Tide and swamped our season and our coach. Our ace ad rep Anita Aubrey by now had taken over our parking operation, and she had an even harder season than Richt. By the time the Dogs got back from Tennessee and Florida, Anita couldn’t give parking spaces away.

Bottom line: There are thousands of people who come to Athens for the game with no tickets. They come to be part of the excitement. Some of them tailgate and watch the game on their TVs. Many, many others eat at a restaurant and find a bar where they can watch the game on TV, surrounded by fans like them. Those are the spillover fans that make our lot fill up. Sure, they’re fair-weather fans, but our local economy depends on them.

For starters, here’s hoping Georgia will quit scheduling three softies a year (one of which almost beat us this time) and play real football games. That will help the excitement factor that fills up our lot. But mainly, it would seem to me that Georgia fans voted with their tires that it’s time for a change. It really doesn’t make much difference to the football program, not yet, because the stadium will fill up, regardless. But it’s those extra thousands we need in our restaurants and bars and parking lots. Things would have to get really bad for a long time to take us back to the mid-1950s, when the stadium was only half-full. Now, the die is cast: We have left the boredom of the 9-3 seasons to see what lies ahead. Will Anita sit alone in the rain, or will she be packing in the fans?

Minnesota newspapers report their state’s efforts to deal with a $1.9 billion budget surplus: transportation, education, a statewide free Internet system, give it back? The Republicans up there see the surplus as evidence that the Democrats raised taxes too high. The Democrats see it as vindication for a tax system that has shifted toward a higher rate for the rich and less on the poor and middle classes, thereby increasing spending power and stimulating the state’s economy.

There are more taxes than just personal income taxes, of cours—sales, fees, corporate—but look at a comparison of Georgia’s personal income tax with Minnesota’s (Institute of Taxation and Economic Policy itep.org/whopays/full_report.php).

Might this help explain why Minnesota is trying to figure out what to do with a giant surplus and Georgia is not? Might it also matter that Minnesota was glad to get Medicare expansion funds, and Georgia said, “Nah, we don’t need your $3 billion?”

In Georgia, as in America, it is a paradox of democracy that lower income and middle income people are struggling to survive, while the very richest people and corporations, through their financial clout, continue to control the legislators and other elected officials like the governor, who rig the system in favor of the rich, thereby damaging the economy that would otherwise lift all boats.