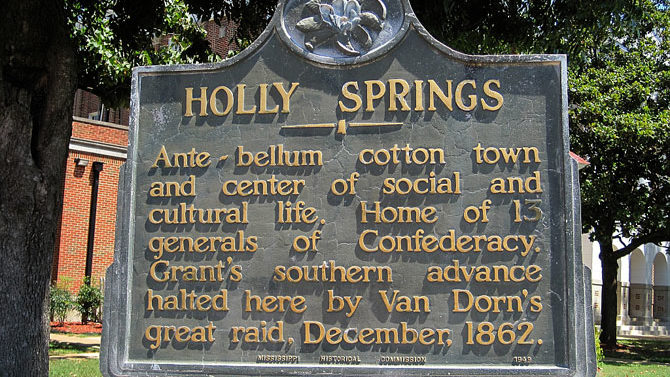 This week Pete has relinquished the Pub Notes column to his illustrious friend, Hubert McAlexander, Josiah Meigs Professor Emeritus at the University of Georgia.

“Not this one, too!” I groaned to my wife. “Why does every Southern hoax have to be centered in Marshall County, Mississippi?” Now, after years of brooding, I have decided to make my protest public.

The last straw is the Ben Affleck–Henry Louis Gates mess. Gates, a distinguished scholar of African American subjects at Harvard, runs a PBS television show called “Finding Your Roots.” He had movie actor and director Ben Affleck as a guest. Affleck, I have learned, is a liberal who has been generous in creating a foundation in Africa. That, of course, I applaud. What I do not applaud is Affleck’s asking Gates to suppress his discovering an Affleck slave-owning forebear, which the world found out from the Sony hack. For whatever reason, Gates did not mention any slaveholding ancestor on the Affleck program.

On June 25, the New York Times and other newspapers carried the PBS announcement that the third season of the program had been suspended. The Times and others, in addition, found it significant that there was no mention of a fourth season.

Affleck is descended from the Georgia slaveholder whom Gates discovered and from a number of slaveholding people in Marshall County. Various bloggers have easily found the Marshall County forebears. They are all people whom I have long known about, and many other descendants are my friends. The key figure is Major James Henry Alexander (1814–1911), who lived in the southwestern section of my county near the village of Chulahoma. All of us white people from Southern backgrounds are descended from some slave-owning people. Get used to it. We are responsible for ourselves, not our ancestors.

This is only the latest attempt to deny and falsify my local history. I was born in 1939 in the old cotton town of Holly Springs, MS, which had a fascinating architectural legacy and a scrambled, often false, sometimes mythic house-tour history. All my adult life, I have done research to find and establish historical fact. I had to correct Shintoist (ancestor worship) fabrications, sloppy research (or none), careless attribution, make-believe and self-aggrandizement through ancestry. Most of this came from local sources. Now I have to face a new example inspired by political correctness or misplaced or misunderstood liberal sympathy.

A couple of years ago, a scholar drawn to the “Behind the Big House Tour” in my town said that his forebears were slaves held by a man named Green, who owned 300. No one in my county owned 300 slaves. The largest owner, Weldon Jones, had over 200, and no one named Green or Greene owned very many. This seems a new kind of Shintoism. At the least, it is a falsification of history. It was conveyed to me in an email from one of the tour’s supporters.

Now we move to another kind of untruth, one that has its roots in getting attention from proximity to literary genius. Surely you can tell what is coming next. A few years ago, a professor at Emory University, then named Sally Wolff (now Wolff-King), presented a program at the Library of Congress claiming that William Faulkner had been a close hunting friend of a Holly Springs man, Edgar Francisco, had read that man’s family plantation ledgers and had mined it for his literary works. In the Washington audience was a cousin of the Franciscos, who warned Wolff of the untruth of the whole story.

Despite all contrary biographical evidence, she went right ahead and wrote a book based on this untruth. She was on public radio, and the book was discussed in the New York Times. As a student of local history, I had read the ledgers in my early research in local sources. As a college professor of American literature, I taught William Faulkner for 50 years. Wouldn’t you think that I might have made a connection if Faulkner had used that dry, quotidian material?

During the subsequent controversy about the evidence upon which the book was based, a blogger with a local background interviewed local people. Though many asked not to be quoted, they discussed the ridiculousness of the claimed Faulkner friendship. One student of north Mississippi history—Jack Elliott Jr.—ended up publishing an exposé in the Journal of Mississippi History: “Confabulations of History: William Faulkner, Edgar Francisco, and a Friendship that Never Was” (Vol. 54, No. 4 [Winter 2012—but not published until winter 2015], 309–348). But that source is not National Public Radio or the New York Times, and falsehood has a life that truth cannot match.

Many in the family emailed me, outraged about the false claim, but they are reluctant to brand the source a liar while he lives. The academic Faulkner website stopped all discussion of the matter because the book had been “peer-reviewed.” Thus, we see secure academics close ranks in defense of sloppy work. Those academics owe the public an apology.

One wonders whether anyone cares about truth anymore! The least I can hope is that such people would at least let Marshall County, Mississippi alone.