A Nearby Editor Wins a Well Deserved Honor

Last month Mike Buffington was awarded their highest honor, the Eugene Cervi Award, by the International Society of Weekly Newspaper Editors. Mike is Editor and Co- Publisher of Main Street News, which owns The Jackson Herald just up the road in Jefferson and other weeklies. Eugene Cervi was the outspoken editor of The Rocky Mountain Journal in Denver prior to his death in 1971. 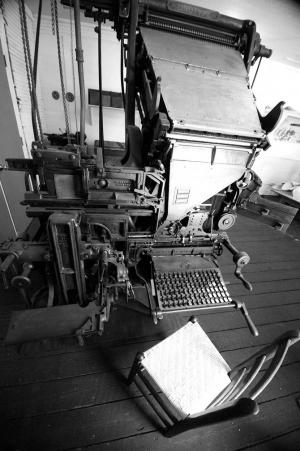 The roots of The Jackson Herald, like those of The Oglethorpe Echo, mentioned last week, are entwined in the cantankerous machine known as the Linotype. There are not many left around. This one is in the Georgia Weekly Newspaper Museum in Homer.

According to the ISWNE website, “The award is presented not for a single brave accomplishment, however deserving, but for a career of outstanding public service through community journalism and for adhering to the highest standards of the craft with the deep reverence for the English language that was the hallmark of Gene Cervi’s writing. The award also recognizes consistently aggressive reporting of government at the grassroots level and interpretation of local affairs.”

However they discovered Mike Buffington, the international editors found the perfect recipient for the Cervi award. Mike said in his acceptance speech that his interest in journalism began as a kid when their district attorney was blown up by a car bomb planted by an organized crime ring. He had to know early on that words have consequences.

Mike started out working for his parents, Herman and Helen Buffington, who owned The Jackson Herald and personified the kind of family journalism we used to have in most Georgia towns. Mike is not only a good newspaper man, he has to do it up close and personal in a small town where he knows everybody, everybody knows him and many of them are friends of his.

As Mike put it in an editorial a couple of years ago: “In a small community, just about everybody is friends or acquaintances with everyone else to some degree. Often newspapers are accused of favoring their ‘friends’ in some way or another. But the truth is, just about everyone we cover in a small town is in some way a ‘friend.’ Still, we don’t let that kind of thing color how we cover local governments.”

It does mean, though, that you’re likely to run into somebody at the post office or the café whom you’ve just written about in the paper and who may be going to jail because of your coverage, as happened to a recent district attorney.

In the aforementioned editorial, Mike went to some length to distinguish between fact and opinion, pointing out that most of politics, for instance, is opinion, a fact that is hard for people to grasp, especially politicians.

That explains why, when you read something Mike has written—even in his opinion columns, actually—it’s like talking with your doctor. Mike is reporting the facts as he sees them. He’s not telling you how he feels about those facts, and he can’t help how you feel about them. He just thinks it’s important that you know the facts. That’s pretty radical in today’s information world, with opinion everywhere masquerading as fact.

Congratulations to Mike and to ISWNE. His award is a credit to him and to the organization.

While we’re on the subject of old journalistic friends, Chuck Searcy will be in town later in the summer. His friend and property manager Dennis Waters is having a yard party for him at Chuck’s house on Milledge Circle Saturday, Aug, 22, beginning around 4 p.m. Mark your calendar, especially all you in the Athens Observer crowd. This will be a good chance to see Chuck and each other.