The Board of Regents Knows What’s Best for You, Don’t Ask

The UGA Human Resources Division sent out a letter last week that begins: “Dear Faculty and Staff, In a story dated February 25, an Athens publication (Flagpole Magazine) reported that USG retirees were losing their health benefits. That is false… “

That is indeed false. What I wrote in this column on Feb. 25 is that University System of Georgia retirees are losing their current health insurance plans. That is true. The present health insurance plans will be replaced in January 2016 by policies that retirees will have to purchase in an insurance marketplace. The University System of Georgia will subsidize these purchases. As of this writing, USG has not determined the amount of that subsidy or whether it will increase as insurance costs increase. Here’s the Board of Regents memo of Dec. 12, 2014, explaining the change.

The Board of Regents, which oversees the University System of Georgia, made this decision without any consultation among those it would call the stakeholders, the insurance users whose lives will be intimately affected by this change in insurance plans, people who belong to an elite pool of highly educated, healthier-than-most insurance users, some of whom also happen to be insurance experts by training. The regents swapped a seamless complement to Medicare for unknown plans yet to be negotiated by each individual in the open marketplace.

This is the kind of top-down decision-making you get from a group composed mainly of businessmen who are appointed by the governor. The regents are once-a-month guys who don’t have to deal with the fallout from their decisions. They can let the chancellor, the presidents and the administrators handle the upset retirees. UGA has to put a good face on it, but this is indeed an insurance change.

What this all adds up to is another cut in funding for the University of Georgia and for the University System. That’s the whole point. Retirees are becoming a burden on the system, and it seems to come as a surprise to the regents that people are living longer, which means more retirees. So, in spite of the implicit contract that those who spend their lives working for the university will get health insurance when they retire, the University System can save money by just giving the retirees a fixed amount, rather than funding their health insurance. 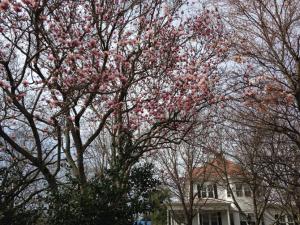 This Japanese Magnolia near the former Commandant’s Quarters on the UGA Health Sciences Campus escaped the chill wind from Augusta and is filling with blossoms. Be sure to see other examples of this beautiful tree around Athens.

In a way, because of the decision-making behind closed doors, the health-insurance change is sort of like what’s happening here to the medical school on the UGA Health Sciences Campus, formerly the U.S. Navy Supply Corps School. A UGA medical school is a longtime dream here and a longtime nightmare in Augusta, home of the Medical College of Georgia, now a part of Georgia Regents University there. We’ll probably never know how it all happened, but when the Navy School campus became available here, then-UGA President Michael Adams was able to convince then-Governor Sonny Perdue, himself a doctor of veterinary medicine, not to oppose recommendations to start a new medical school in Athens. Adams was also somehow able to gain the trust of the president of the medical college in Augusta. So, at last, Athens got a medical school. They hired a dean and started fixing up the campus and basically had to take whatever students Augusta didn’t want, and last spring they graduated the first class of doctors, who came out with high rankings. A great success story! So they fired the dean.

Why did they fire the dean? She erred on the side of success. Augusta could not sit by and watch the medical college in Athens take off and prosper. Times have changed: a different governor who has appointed a different board of regents, new university presidents in Athens and Augusta and, as usual, more political clout in Augusta.

Again, as with the health insurance, decisions were made without consulting those most closely involved and not necessarily for their benefit. The point of the new health insurance is to cut costs for the University System of Georgia while promising retirees that everything is going to be just as good, even better. The point of the new medical college dean, when one is hired, is that he or she will be subservient to Augusta, while promising that the doctors graduating from the Athens campus will be just as good or better.

The fix is in. All the rest of us can do is fall in line and try to adjust. We’ll still have insurance of some kind. We’ll still have a medical college of some quality, and we will also still have the prerogative to try to find out the truth, no matter who calls it false.