Something is happening on the University of Georgia Health Sciences Campus that could threaten its very existence. You will recall that the departure of the U.S. Navy Supply Corps school left the old State Normal School campus up for grabs. Some adept footwork by then-UGA President Michael Adams and then-mayor Heidi Davison and her committee headed by local businessman Buddy Allen facilitated the transfer of the property to the University of Georgia. At the same time, the Board of Regents and the Georgia legislature approved the creation of the UGA Health Sciences Campus on the Navy-Normal School grounds.

Against the political odds, the University of Georgia finally got a medical school (call it what you will) and went to work refurbishing the campus and recruiting faculty and students. The first class of future doctors graduated this year from a medical program that has partnered not only with our two nearby hospitals but also with local and northeast Georgia physicians. This innovative arrangement has given students the opportunity to go into the offices of local doctors and accompany them as they see patients, helping and learning and coming out of the program with a much surer grasp of what medical practice actually entails. 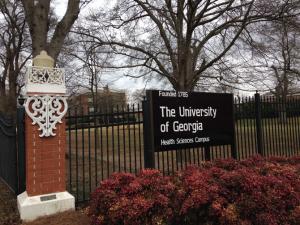 The spark plug behind the successful launch of the health sciences program has been its dean, Barbara Schuster. She was recruited as soon as the program was approved, set it up and saw it through the graduation of the first class. She was also instrumental in forging the bonds with the local medical community that enrich the experience of the medical students. Doctors do not take kindly to intrusions on their time, but somehow Schuster was able to secure the enthusiastic cooperation of over 350 doctors in Athens and northeast Georgia.

The University of Georgia health sciences program has been a resounding success for the education of future doctors for our state, and incidentally it has been a tremendous boost for Athens and a perfect reuse of the Navy school campus. Now, its future is in doubt. Dean Schuster has been fired by officials at the medical college in Augusta, and they have come to town and reasserted their control of the UGA program, while refusing to give any reason for Dean Schuster’s ouster, other than to call it a “personnel matter.”

Doctors who teach in the health sciences program here are concerned that the sacking of Dean Schuster sends the message that the longtime medical college in Augusta has finally assembled the political muscle to squelch our upstart campus. They stress the personal and professional skills Dean Schuster brought to her job, and they credit her abilities with accomplishing the delicate task of including the local medical community as partners. They point out how quickly this cooperative effort could disintegrate, especially if Dean Schuster’s replacement is sent here to assure that our program doesn’t outshine Augusta’s.

Is it possible that all the good work to create a medical campus here will be dumbed down into a second-class effort? With the departure of President Adams did we lose an advocate with the ability to defend UGA’s medical program? Is this more of the anti-Athens bias the Georgia legislature has exhibited? Is the chancellor too compromised politically to protect UGA’s health sciences program? Do influential UGA alumni even know what’s happening? Is it too late to prevent the dismantling of UGA’s medical program?

The basic rule of medicine should apply now to the UGA health sciences program: “First, do no harm.”