Our Leaders Are Accomplishing Exactly What They Want: Nothing

Four years ago I wrote in this column: “We will soon have a mayor whose main knowledge of the workings of local government is the cheat sheets prepared for her use in the campaign. No problem. She is accustomed to relying on professional staff to run things, and Athens has a good staff, though accustomed to running things their own way. Watch how quickly our new mayor defers to them.

“Where does that leave the Athens-Clarke County Commission? Odds are that they will flop around like a headless chicken in a hail storm and fail to agree on any structure of leadership that can provide direction and get things done.” 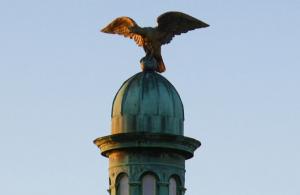 The eagle atop City Hall is a perfect symbol for our city: a weathervane that won’t move, no matter which way the wind is blowing.

Well, I didn’t have to be a weatherman to see which way the wind was blowing, and now that prediction has turned into business as usual. In the ensuing years, this column has raged about the do-nothing mayor and the do-nothing commission while missing an important point: That is the point—to do nothing. This column has taken the approach that our city has a lot of problems that demand action. Our mayor, whose approach is the only one that matters, succeeds more by doing less.

If that sounds like gibberish, it helps to contrast our mayor with one who has a different approach.

Those of us who took the Athens Heritage Foundation bus to Greenville last year enjoyed lunch with Mayor Knox White, who explained to us how his city accomplished its redevelopment of the downtown area. White is a Republican, and he has effected a lot of public-private partnerships to develop hotels, retail stores and performance spaces in a downtown that is impressive, though a little too buttoned-up for Athens tastes. The crown jewel of the Greenville renaissance is the river that runs through downtown and over an awesome waterfall. The falls for a generation had been obscured by a massive, four-lane automobile bridge, and there was strong opposition to the suggestion that the bridge should be removed—it would stop traffic flow and kill downtown, you know.

White and the city council pushed and fought and finally got the bridge torn down, revealing the falls to an astonished public. Now, the falls and its park are spanned by a soaring pedestrian bridge that is always full of admirers. It’s worth a day trip over there just to walk across that bridge.

Mayor White provided the leadership that turned Greenville around, and in recounting the saga he made a significant remark. He said that he tried for years to get his city manager to take the initiative in trying to bring about these changes that Greenville needed. White said it finally occurred to him that it was not the city manager’s job to bring about innovations. The manager was there to run the city, to make sure that the trash got picked up and the police and fire departments were adequately staffed. White said that he only started getting things done when he stopped looking to the manager for leadership.

Athens is not Greenville and doesn’t want to be. But we might take another look at how we’re going about things here. A mayor is a reflection of the city’s leaders, and apparently our leaders are content for our government to do nothing new. That’s why our mayor suits our city’s leadership. We’ve all noticed over the last four years a resistance to taking action. Generally, calls for action are ignored, but if they get too persistent, a study committee is appointed, which is considered action, though there are no results. A Greenville-like initiative here for public-private development of what used to be called the “River District” was strangled behind closed doors, while student apartments get the hands-off green-light treatment wherever bankers will finance them, which apparently is everywhere.

Our mayor succeeds by doing nothing, which apparently is what our city leaders want. Our commission does nothing along with the mayor, while the city manager runs things in a professional manner and doesn’t have to worry about any initiatives that would change anything or cost money.