Warm Your ATH UP! 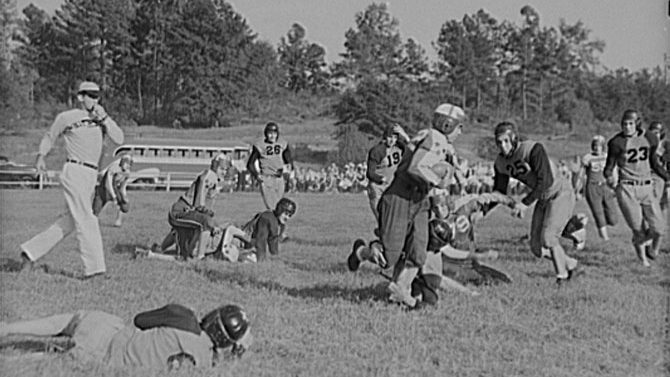 Hale Burnette, the highly successful, now-retired Oconee County football coach, remarked recently that he never slept in a heated room until he went off to college. Hale was a country boy in Greene County, and he had to catch a ride home every day after football practice. He laughed the other day about how cold it was at our teammate Bobby Ivie’s country home, too, when Hale would spend the night there. Was that the secret to why they were such good football players? No doubt it was part of the reason all those country boys were so tough. Our schoolyard games took on a whole new element of ferocity when they joined us in the 8th grade, and they were the backbone of our sports teams.

Could I have been All-State like Bobby and Hale if my father had not put in a furnace right after the war? Up until that time we had been heating with fireplaces, and he was mighty tired of starting and maintaining all those fires, chopping kindling and hauling in the heavy coal scuttle. (Ever seen a coal scuttle? I had to look up how to spell it.)  Well, it wasn’t just the cold rooms that made those guys tough. I would have had to move to the country to get toughened up enough make All-State. Hale was probably missing chores at home while he hung around the pool room waiting for Ivie to get through courting. Hale’s other ride was an older neighbor who had to go by the VFW for a few beers before heading home. (Hale says that between his neighbor’s beer and Ivie’s fast driving, it’s a wonder he survived his commuting.)

Would we all be better off without central heat? My father would never have agreed to that, and I doubt that Hale or Ivie would, either, though Hale says today’s football players don’t know what hard work is.

My wife, Gay, and I have a running dialogue about World War II and how the citizen army that fought it was made up of boys whose lives were a lot tougher than ours, including a preponderance of country boys who were accustomed to hard work, firearms and discomfort, as well as thinking for themselves and fixing things when they broke.

Does the advance of civilization inevitably soften us? Do central heat and air along with indoor plumbing mean that eventually we’ll lose the ability to defend ourselves? (Our national strategy now is to ignore our increasingly soft, fat, comfortable populace and go on the attack with machines and a professional military. That works as long as we’re fighting “over there,” but once the boat people reach our shores, we’ll be trapped in the malls like movie extras surrounded by zombies. Who’ll keep our pets warm then?)

History, which we choose to ignore, is replete with the rise and fall of civilizations, though the prevailing attitude is always, “it can’t happen here.”

Meanwhile, we won’t even come to grips with climate change, because our rulers are invested in the outmoded technology that exacerbates it. Because of our vested interest, we are driven to ignore science as well as the evidence of our own experience and invent false explanations to deny reality. While we all get fatter and fatter and less able to cope with our environment on a personal level, our nation gets warmer and warmer (and also colder and colder) while we do nothing. One of the great mysteries of all time has been “what happened to the dinosaurs?” Another will be, if there is any more time left for history, “how could they ignore climate change?”

Fortunately, you don’t have to ignore it. Instead, you can read about climate change, along with other topics like keeping pets warm, seasonal affective disorder, cold remedies, the perfect soup and beards to keep you warm—all inside, in this issue’s special emphasis on winter and its discontents: Warm Your ATH Up!