I have lapsed, lately, in my journalistic responsibility to keep the world’s preeminent saxophone-playing, songwriting CPA, Harold Williams, in touch with his many fans. Harold is at home (130 Plantation Drive, Athens, GA 30605—cards and letters always welcome) and struggling to continue fighting back from the crippling fall last year that left him paralyzed. He now has some ability to move his hands and to some extent his legs. He can pilot himself around in his wheelchair, and he now has a spiffy Toyota van, equipped to transport ex-saxophone-playing CPAs. He still has a long way to go, but he’s an optimistic fighter, and his great wife, Paula, also happens to be a nurse, and they have a great team of caregivers.

Harold says he’s tired of being cooped up inside during all this gray weather and is looking forward to spring.

“I’m still here and still happy,” Harold says. “God bless everybody who has been such a help to me.”

When pushed by a hard-nosed reporter, he admitted, “The happiness comes and goes.”

From our friend Chuck Searcy in Hanoi comes this piece from his friend George Burchett, who lives in Hanoi but grew up in Paris—written in immediate response to the events in Paris last week and then revised later:

Charlie was a good friend from my high school years in Paris, in the early 1970s. Charlie Hebdo was a child of May ’68, France’s youthful rebellion. It was a good time to be in Paris. You could see the latest Fellini, Antonioni, Bertolucci, Visconti, Tarkovsky, Godard, etc. Sartre was still around. You could attend public Foucault lectures at the College de France, watch the inscrutable Lacan or the great mythomane André Malraux hold forth on TV.

Going to the Quartier Latin to see Fellini’s Satyricon or Easy Rider, one passed the black vans of the CRS, the riot police, parked on the Boulevard Saint Michel and Saint Germain. You’d spot them inside, playing cards, ready for action at any hint of “trouble.” The same game of youth versus authority was played in the very same places in medieval Paris, between the king’s constabulary and mischievous students. It was all part of the great French tradition of youthful rebellion against authority, king and church or, after the Revolution, the much despised bourgeoisie.

It inspired a rich poetic tradition: Villon, Ronsard, Rimbaud, Verlaine, Baudelaire, Appolinaire, Prévert, to name but a few from a very long and bright list. Charlie Hebdo was part of that wonderful centuries-old tradition of biting satire and irreverence. Nothing was sacred.

The gunmen who sprayed Charlie Hebdo with bullets and assassinated four of France’s best and wittiest cartoonists, among others, have also fired bullets into our collective psyche. 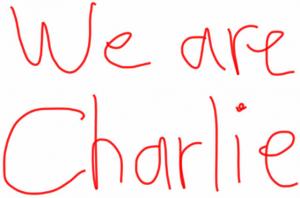 What happened yesterday morning in Paris was unthinkable some 40-odd years ago. Yes, there were Red Brigades, Baader Meinhof, the PLO, the war in Vietnam, the coup in Chile and so on, but there were also hope, solidarity, love, tenderness, humor, poetry. And then claim the world was better 40 years ago? There is hope, solidarity, love, tenderness, humor and poetry today, also. There is also more attention being paid to women’s issues, racial injustice… There are grassroot projects for poetry, art, creativity; there are Nigerian authors finally winning literary prizes; there are TV shows that portray characters who have never before been given screen time; gay marriages are being made legal. You just have to look beyond the way mainstream media is reporting the world we live in.

The world was soaked with blood long before 9/11. Or do the millions of Vietnamese who died because they fought for an ideology unpopular in various democratic countries not count as victims of a war of ideologies? Do the many lives shed on the African continent at the hands of white Christian colonialists not stand for what intolerance can do? Are the black men shot by white police not proof that the “West” is not quite as racially tolerable and democratic and accepting as it likes to believe when it thinks of its “core values,” whatever they are and however unified they suddenly seem to be, under attack?

Let’s condemn what happened in Paris, but let’s not forget that the atrocity comes after a long legacy of humankind of all shades, religions and ideologies committing various acts of violence on each other in the name of being right, of knowing what is true. I am not Charlie if it means blindly accepting terms like “collective psyche,” “Western values of democracy,” “civilization” and a sudden cry for the protection of a freedom of speech that many now calling for it have failed to uphold. I am saddened and outraged by what has happened, but I refuse to unite under a banner of perceived sameness against an “other” that is so ill-defined and blurry.