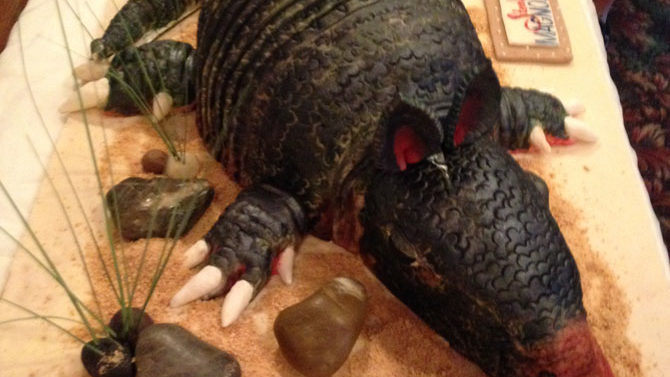 I was going to mention Steel Magnolias, because it is so much fun I wouldn’t want you to miss it. Then, Diane McDonough Riley sent in a letter summing up the play very well: “Friday’s opening performance of Steel Magnolias was a sellout. No detail was overlooked in the casting, costuming, set-design and decoration. I have to admit, they had me at the armadillo cake, perfectly (and repulsively) rendered by local entrepreneur Savie, of sweetiepiebysavie@gmail.com, displayed in the lobby for the opening night’s reception. Town & Gown Players’ production of Steel Magnolias was a tour de force by an ensemble cast of six very talented actors who convincingly portray the bulwark provided by friendship forged over time. The script’s admixture of earthy humor and genuine pathos is effective and affecting. Don’t miss this local gem, which will be presented again Thursday–Saturday, June 12–14 at 8 p.m., with a Sunday matinee on June 15 at 2 p.m.”

Of course, you had to be there last Friday to enjoy Savie’s deliciously repulsive armadillo cake, but you’ve got four more chances to enjoy the play and understand the reference to the cake (townandgownplayers.org). The play is much more tightly focused than the movie, and the cast zings in the laughs and the tears: Bryn Adamson, Janet Robertson, Cher Schmidt, Greer Caldwell, Gillianne Gentzel and Gay Griggs McCommons (my wife!). This is theater at its most accessible, delicious as red velvet cake. 706-208-8696. Hurry!

I know some people snicker at my old Volvo station wagon, including my wife (who scowls), but for a second car basically to drive around town, why do I need anything “better?” What I do need is somebody to keep it going, and for years, with a series of Volvos, that task was admirably performed by Don Doster, master mechanic at Doster Brothers, down on Pulaski Street, now closed.

For the last decade, that mechanic, for me, has been Garry Cummings. Garry is a smart, competent, factory-trained foreign car expert, honest and never satisfied until the job is done right. His only drawback is that his shop is way out in the wilds of Jackson County, which means that except for quick things he can fix while you wait, like adding freon, you’ve got to get somebody to follow you out there and then take you back when your car is ready—same procedure as the Atlanta Highway, except longer.

About the time I started going to Garry, our main ride became a Mini-Cooper, which, since it was under warranty, had to be serviced and repaired in Atlanta. Once that warranty ran out, I naturally tried to get Garry to put it under his care, but he said he didn’t know anything about Mini-Coopers and wouldn’t take it on. Once, though, I showed Garry the estimate for getting something repaired in Atlanta, and he was horrified and said he could do it for a lot less. He did, and he started learning about the Mini-Cooper. It’s a good thing, because at the end of last year, the automatic transmission blew up. The Atlanta cost for replacement was twice the worth of the car. We were distraught. The car is a member of the family. It looked like the end. But Garry got online. He found a transmission in Jefferson, went over to look at it and rejected it. He finally found one in Carnesville from people he had done business with. Then he went back online and carefully educated himself on how to change out a Mini transmission, all the connecting parts, computer-syncing, etc. All by himself out there in the country, he changed out that transmission. Our beloved little car got a new life, and Garry convinced me he can work on anything. He’s a long way out there, but he’s worth the trip (garrysimports@windstream.net, 706-335-4197).