Well, the giant Selig project finally gets the green light. It will probably have a bad effect on downtown, providing more cookie-cutter, bland, chain businesses fueled by ads on national TV—the antithesis of what we like to think Athens is all about. No surprises there, especially from a county commission that built a parking deck and filled its ground-floor commercial spaces with chain businesses to the exclusion of anything local. (I know: their business partner does the booking, but still… )

Of course, the development of Athens has always been driven by commercial interests. The Classic City grew up initially to sell stuff to the faculty and students and provide housing for them, so really not much has changed. The downtown we admire replaced stately mansions that make preservationists weep at what was torn down to make way for mercantile emporia. And the same is true all over town, as the large old houses became too much for the smaller, aging families, who sold them to avoid the taxes and the upkeep. Without the fraternities and sororities we’d have even fewer of them left.

Was there some inherently better sense of design that caused the merchants to build well made red brick buildings downtown? Or was it just the cheapest and safest material at the time? Was it just natural bad taste when so many of those buildings were modernized during the ‘60s with metal facades over the brick? What accounts for the proliferation of beige brick and tan trim in our present Athens (and university) appearance? Just think how Athens would look now if the construction of just the past five years had used red brick instead of all this stuff out of the Bland New World pattern book. 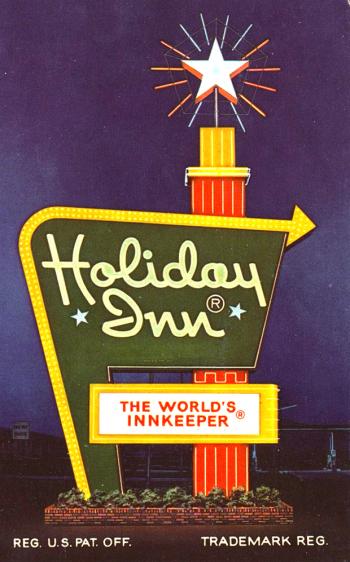 The Holiday Inn sign that used to be considered the No. 1 example of garish commercial design is fast becoming as much a classic of the ’50s as the ’55 Chevy. If Holiday Inn brought it back, would we applaud or boo?

Is there any chance that we could actually have design standards that would protect not only the already-built environment but the next one, too? And who would determine those design standards? Would it be somebody cool enough to appreciate the old Holiday Inn sign, or would it just be somebody who sees nothing wrong with building every new infill development to look like it was built in 1890?

Many of us value local businesses but many of us, too, prefer the known quantity of Wendy’s to the better taste of White Tiger. As long as the Athens economy is driven by the students, their tastes will ultimately determine what is built here. You know they’re going to love Selig City as much as they love those chains in our city parking deck. They don’t care who owns it or what color the brick is. It’s useless to argue that Athens would be richer if we still had the Victorian mansions along Thomas Street instead of the Banner-Herald.

The mantra is that when Georgia Square Mall opened in 1980 it sucked all the business out of downtown, leaving empty buildings and cheap rents for the nascent music scene. Actually, only the main stores, Macy’s, Belk and J.C. Penney, moved to the mall. The only local business that moved out there from downtown was Rosenthal’s Shoes. It killed Rosenthal’s, and of course those that didn’t move suffered mightily, too. Now, the new Oconee mall could have the same effect on Georgia Square and the outlying stores.

Nobody knew back then that there was a music scene just waiting to happen and that it would transform downtown Athens. Nobody knows what’s next for downtown now. Suppose the University of Georgia is just before morphing into an online school, where student and faculty presence on campus is drastically reduced. What does that mean for downtown and for Selig? Maybe Selig City will become the next abandoned retail spot, giving rise to the next music scene—with a level path to campus, of course.