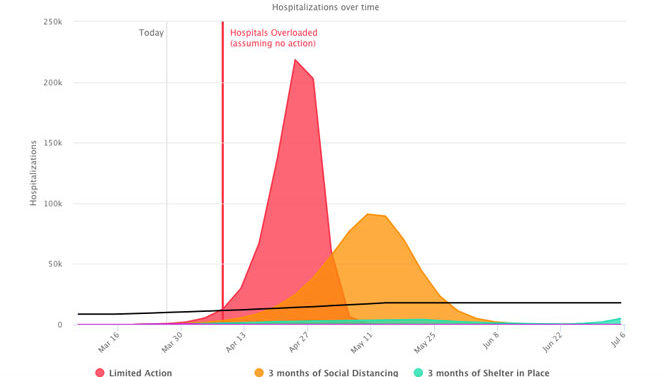 We at Flagpole are not doctors. We didn’t even stay at a Holiday Inn last night. But we have been listening to doctors and obsessively stress-reading everything we can get our hands on about the novel coronavirus. We also know we have a lot of confused and overwhelmed readers out there. Here’s what we’ve learned.

A coronavirus is a type of virus with spikes all over it that stick to lung cells, causing respiratory problems and sometimes viral pneumonia. Several strains of the common cold are coronaviruses, as are SARS and MERS. This particular coronavirus—sometimes referred to as the “novel” coronavirus because it’s new—is officially known as SARS-CoV-2, and the illness it causes is COVID-19.

Where did it come from?

First of all, forget the idea that it was made in a lab—researchers have debunked that. Nobody is 100% sure, but SARS-CoV-2 most likely spread to humans from bats. It’s not uncommon for viral diseases to jump from animals to humans—SARS came from civets, MERS from camels, H1N1 from pigs and H5N1 (bird flu) from chickens—and those are called zoonotic viruses.

How did it spread?

Originally, scientists thought it started at a fish market in Wuhan, China, but that no longer appears to be the case. However, Wuhan is a regional transportation hub, so the first infected people in December 2019 could have easily spread it elsewhere. Within a month, it had spread to the rest of Asia and the U.S.

Keep in mind, one of the reasons this virus is so dangerous is that people can get it and might not have any symptoms for up to two weeks—but they can still spread it. And once it spreads, it is very well adapted to latch onto other human hosts. This makes it harder to contain than previous coronavirus outbreaks like SARS, which caused more serious illness but also didn’t spread as quickly.

But wait, I thought this was just like the flu?

It’s not. It’s 10 times more deadly, for one thing. While about 80% of people experience no symptoms or mild ones, 20% get seriously ill. Their lungs fill up with fluid and dead cells, making it hard to breathe, and their own immune system turns against them. That’s why ventilators are so important—they can keep the seriously ill alive long enough to recover.

Good thing I’m too young to get it.

Au contraire. More young, otherwise healthy people are starting to die of COVID-19. It is true that the risk of death rises the older you are, and that people with underlying conditions like lung and heart disease are more vulnerable. Remember, though, before you go to that keg party, even if you don’t get sick, you can still give it to your parents and grandparents.

Duly noted. How do I know if I have it?

You might not. Symptoms include fever, headache and shortness of breath. Officials are currently advising that only those with severe symptoms be tested. Piedmont Athens Regional has a drive-through testing center at its Oconee County campus, but tests are limited. Call 1-866-460-1119 for pre-screening.

Wash your hands a lot with soap and water for 20 seconds, or use hand sanitizer. Clean surfaces where SARS-CoV-2 could linger, like doorknobs and countertops. Stay in your house as much as you can. If you have to go out, stay at least six feet away from other people. In other words, act like you have the virus.

How long do we have to do this?

Probably a while. In mid-March, the Centers for Disease Control and Prevention recommended eight weeks of social distancing—staying away from other people—and no gatherings of 10 or more. It’s not guaranteed, but, if SARS-CoV-2 acts like other coronaviruses, it might ease up in the warm weather, and we’ll have flattened the curve enough to come out—at least for a while, until it comes back. The reality is, even if we can come out this summer, there’s a good chance we’ll have to go back to sheltering in place if and when the virus re-emerges. This is not likely to end until there’s a vaccine. Developing one, testing it to make sure it’s safe and manufacturing enough could take a year or more, though.

The reason we’re all supposed to stay inside is so we don’t all get sick at once and overwhelm hospitals. If we don’t take extreme measures, epidemiologists project that COVID-19 cases will rise steeply in the coming weeks, far outstripping the health care system’s ability to handle it. If we follow the CDC’s advice, the idea is that we might drag this thing out, but we’ll have enough medical personnel, equipment and intensive care beds to handle it.

The Trump administration’s incompetence already squandered a two-month head start, which could have been used to make more tests and protective gear to handle the plague. Hopefully, flattening the curve will also buy time to gear up manufacturing, so that the U.S. can start to do what countries like South Korea did: aggressively test people, then track down their contacts and quarantine those who’ve been exposed, letting the rest of us go about our lives while stamping out the virus. Or, if we don’t flatten the curve, we may wind up like Italy or Spain—on total lockdown, with people dying by the thousands and an economy that’s cratering even worse than it is now.

In other words, don’t make any plans for Easter.

Why not just get it over with, then? Herd immunity.

That could kill a whole lot of people—2.2 million in the U.S., according to the Imperial College of London. One Emory University professor says Georgia is at the “point of no return,” and 213,000 people could die in Georgia alone if nothing is done to slow down the spread. Three months of sheltering in place could save 206,000 Georgians’ lives, according to Carlos del Rio.

That sounds bad. But what about the economy? I’m out of work, and rent’s due.

We feel your pain—Flagpole is struggling, too. You can sacrifice yourself or your elders at the altar of the Dow, as some conservatives have proposed. Or you can try to stay afloat—check out the list of resources in last week’s Flagpole—and wait for the cavalry to arrive. The recently passed stimulus bill includes $1,200 checks for most individuals, as well as expanded unemployment benefits and relief for small businesses. In the meantime, give what you can to charity if you’re on a salary and working from home, support your favorite local businesses by eating take-out or ordering from them online, and hunker down, you hairy Dawgs!