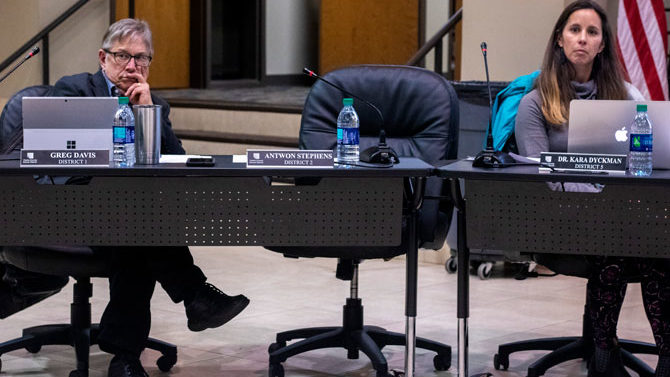 Newly appointed Clarke County Board of Education member Antwon Stephens took office under a cloud of revelations regarding his education, political past and financial misdeeds, including allegations of theft and campaign finance violations. As years of deceptions unraveled, Stephens said he is having himself committed to a mental health facility, although he has not resigned his seat.

Before the board appointed Stephens to the vacant District 2 seat last month, he had raised money to run against Republican U.S. Rep. Doug Collins of Gainesville this year despite being ineligible to serve in Congress because he won’t turn 25, the minimum age, until June of 2021. When Collins became President Trump’s chief defender in the House impeachment hearings, popular #Resistance figures like actress Alyssa Milano and prosecutor-turned-podcast host Preet Bharara tweeted links to Stephens’ ActBlue fundraising account to their millions of followers, leading several donors to contact Flagpole recently to say they were duped.

According to a letter from the Federal Election Commission to Stephens’ campaign treasurer, Ty Kelley, dated Jan. 26, he failed to file a statement of organization in a timely fashion. In addition, as of press time, he had not filed any reports disclosing his campaign’s donors and expenses, although the most recent deadline was Jan. 31.

Stephens said on Twitter that he would donate his campaign funds to Devin Pandy, another Democratic candidate for the 9th District seat. Pandy told Flagpole last week that he had not received any money from Stephens, although they discussed transferring $5,000 from Stephens’ campaign to Pandy’s.

Northeast Georgia Democrats are upset that Stephens did not tell them he is 23 years old and ineligible to serve in Congress, according to Jarred Hudgins, who supported Stephens’ campaign but now works for Pandy. “I’m angry, because I wasted my time,” Hudgins said.

Stephens also has not filed any campaign finance disclosures for his mayoral campaign since Jan. 31, 2018, the Athens-Clarke County Board of Elections confirmed. In that report, Stephens stated he had raised $102,396 and had $88,695 on hand. He dropped out of the race before the qualifying period in March 2018, citing illness, but state law requires unsuccessful candidates to keep filing disclosures until the money has been spent or given away. The Georgia Government Transparency and Campaign Finance Commission could fine Stephens for every filing deadline he missed, according to William Perry of Georgia Ethics Watchdogs, who frequently files complaints with the commission and filed one regarding Stephens on Feb. 10. Perry called the case the strangest he’s ever seen.

“This is a big problem,” Perry said. “For somebody to have raised campaign funds and not said what they ever did with the money is a complete violation. And now this person is in a position of trust.”

As it turned out, the contributions were made up. BluePrints, the Cedar Shoals High School student newspaper, contacted North Carolina lawyer Lloyd Kelso, who is listed as donating the maximum of $2,600 to Stephens’ mayoral campaign. Kelso said Stephens worked on his longshot 2016 presidential campaign, but he did not contribute to Stephens’ campaign. Then, Stephens admitted that he raised zero dollars for the mayor’s race, and called the fabrication a “publicity stunt.”

In addition, Stephens was accused of theft by deception in 2013, when conservative pundit Crystal Wright filed a police report alleging that Stephens owed her a $10,000 speaking fee and travel expenses for a disastrous tea party conference in Athens that Stephens organized as a 17-year-old. Wright, who at the time ran a blog called Conservative Black Chick, said Stephens never paid her. “He is a con artist, and no one should elect him dog catcher,” she wrote in an email to Flagpole. “I was out of thousands of dollars for air travel and hotel. He is a deceitful, dishonorable person. A liar.” Police did nothing, she added.

BluePrints also revealed that Stephens did not graduate from Cedar Shoals High School, despite telling the school board that he was “Cedar Shoals class of 2014,” and reported that Stephens did not submit two letters of support required with his application. However, the board isn’t taking any action—even discussing appointing Stephens to committees last week, despite his absence from the Feb. 6 meeting.

“While the unfolding of events and information is not optimal, it is not a legal disqualifier,” according to a statement BOE President LaKeisha Gantt issued after the BluePrints story broke. “Being a high school graduate is not a requirement for serving on the Board of Education and the Affidavit signed does not contain any representation about being a graduate. Therefore, this revelation does not change his eligibility for the office. Additionally, the Board of Education did its due diligence by having Mr. Stephens sign the qualifications affidavit before being sworn in.”

Stephens has said he left Cedar Shoals and graduated from an online high school because he suffered from asthma, and that he was diagnosed with cystic fibrosis in 2018. But BluePrints also raised doubts that he did graduate from Christian Leaders Institute.

At the Feb. 6 meeting, Gantt read a statement on Stephens’ behalf saying that he missed the meeting because of “sickness and stress,” which he blamed on the “vulture press.” He also missed a joint meeting between the BOE and the Athens-Clarke County Commission on Feb. 10.

Stephens had said earlier in the week that he would release a statement Feb. 7. That night, he wrote a lengthy Facebook post coming clean about the mayor’s race. He also said he had been prepared to fight a legal battle against the age requirement to serve in Congress, and he would file the required paperwork correctly and pay any fines and late fees. “I take full responsibility and apologize to my community for my many mistakes made as a young person that entered politics without mentors,” he wrote.

A couple of hours later came a second post: “I spoke to my family this evening and I am informing the public that I am going to be committing myself voluntarily for mental health help and suicidal thoughts. I would appreciate prayers during this time and battle. We ask for respect and privacy during this time. Thank you so much.”