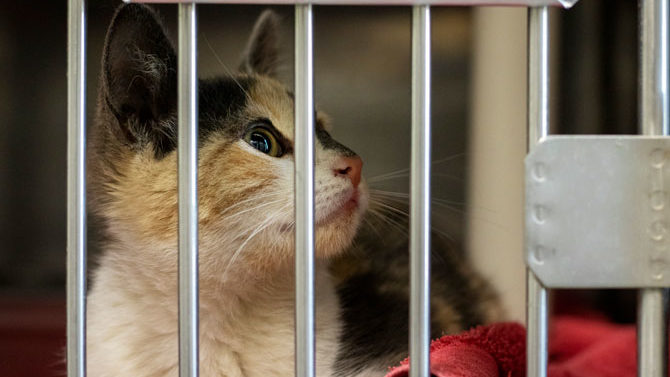 Local animal lovers are angry about two mass euthanasias at the Athens-Clarke County animal shelter last month. Animal control euthanized 32 cats after two kittens were thought to be positive for panleukopenia, or “panleuk,” a contagious and often fatal disease that attacks a cat’s white blood cells, destroying its immune system. However, most of the euthanized cats almost certainly would not have contracted the disease, since a third of them were vaccinated against it and another third were housed in a separate room.

The incident began in July, when Jed Kaylor, kennel director at the Athens Area Humane Society, a no-kill shelter and adoption agency that partners with ACC Animal Control, took a kitten that appeared ill at the shelter to South Athens Animal Clinic, where it was diagnosed with panleuk and euthanized. As a result of the diagnosis, Animal Control Administrator Michelle Carrigg ordered the county’s cat area quarantined for two weeks. Four unvaccinated cats housed in the same room as the kitten were euthanized.

A few days later, a second cat appeared ill. Testing it using a dog parvo test—a common practice—shelter staff obtained a “light” positive, which may have been caused by the cat’s recent vaccination. The kitten was euthanized, and Carrigg sent the body to UGA’s vet school for a necropsy, or animal autopsy, to confirm the presence of the panleuk virus. Before receiving the test results, she ordered 28 cats in the same room as the kitten or an adjoining room to be euthanized.

The next day, the shelter received the preliminary results of the necropsy that showed the kitten was in fact negative for the disease. Even so, Carrigg issued a news release that said the shelter would not accept cats for 10 days due to “two confirmed cases” of panleuk.

In an interview, Carrigg admitted that she had not reviewed the cats’ vaccination records before she had them euthanized. She defended her decision, saying that even a cat that is immune to the disease can be a carrier, picking up the virus on its fur from a visitor who has touched an infected cat, and then passing it on to others the same way.

“That’s simply not an appropriate reason for euthanizing those animals,” said Janet Martin, a veterinarian who is the medical director at AAHS. “Depopulation is not recommended or necessary based on current science. Following current guidelines for standards of care in animal shelters from the Association of Shelter Veterinarians, any non-symptomatic, exposed cats would have been placed in quarantine with appropriate protocols for handling to avoid transmission.”

ACC Manager Blaine Williams defended Carrigg’s decision, adding that American Society for the Prevention of Cruelty to Animals research shows that the panleuk virus can survive in the environment for a year. Martin, however, countered that there are disinfectants that kill the virus, including a product AAHS provided to the shelter recently to replace previously used cleaners, and that shelter renovations in 2016 were specifically designed to isolate cats safely in the event of disease outbreak.

The shelter’s harshest critics are also its most important partners, and the killings touched off a furor in the local animal care community. Cat rescues such as AAHS, Circle of Friends and Three Paws Rescue are responsible for almost half of the cats that leave the shelter alive. They rescue hundreds of cats each year and move them into no-kill settings, including foster homes in preparation for adoption.

Those organizations are critical of many of the shelter’s practices. Representatives say they can’t count on the shelter to conduct tests or vaccinate cats at intake—vital practices that prevent the spread of disease in densely populated shelter and foster home environments. “The shelter doesn’t seem to have a standard protocol for vaccinating cats and testing them for common contagious diseases,” Three Paws Rescue Director Madison Webb told Flagpole. She is so alarmed at the mass euthanizing and inconsistent testing that she has begun to focus on rescuing cats from “more reliable shelters” recently.

Critics also protest the shelter’s current practice of housing only 40 cats in an environment enlarged to accommodate 100, thanks to a SPLOST 2011 investment. The 40-cat limit, they assert, increases cat deaths, pointing out that two-thirds of the cat euthanasias in the first half of 2019 followed the imposition of the cap on June 18.

Carrigg said the cap is necessary because the shelter currently has only one full-time cat caregiver, far fewer than the three full-time and two part-time workers needed to care for the 100 cats for which the facility is designed. According to Tawny Waltz of the Circle of Friends, “Shelter management always seems to be baffled by the very predictable increase in cat and, especially, kitten intakes in the warm months we call ‘kitten season,’ and they are chronically understaffed.”

Last year, the Georgia Department of Agriculture temporarily closed the shelter because of understaffing, and in mid-June of this year, volunteers met with Carrigg to express concerns that understaffing again would result in needless cat deaths. Carrigg said she is currently reviewing 55 applications for the positions that have been open since May and hopes to be fully staffed soon.

Athenspets founder Lisa Milot, who raises funds for the medical care of shelter animals, took the county to task for what she said is misrepresentation of shelter euthanasias. “The shelter reported a 0.4% euthanasia rate in public statements, but 9.3% of dogs and 25% of cats did not make it out of the shelter alive in 2018,” Milot said. “The ‘adoptable euthanasia’ rate the county reports to commissioners and the public obscures the deaths of many animals, including kittens under 8 weeks old, animals with treatable skin damage or colds, friendly yet scared animals and all 32 cats killed for supposed panleuk exposure. They are simply labeled unadoptable, and their deaths are not discussed.”

Veterinarians, rescue workers and volunteers have sought meetings with county officials, including Mayor Kelly Girtz, to complain about unnecessary euthanasia and hygiene issues at the shelter, but the recent killings have had a depressing effect on everyone involved.  Representatives of these groups said that they will continue to press for improvement.