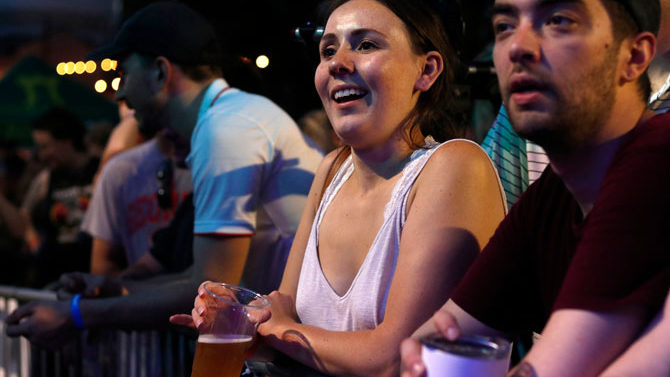 It won’t happen this year, but soon, AthFest beer drinkers may enjoy the sweet taste of freedom.

Currently, at outdoor festivals like AthFest, beer consumption is restricted to barricaded “beer gardens.” Athens-Clarke County officials want to tear down those walls and are exploring their options.

Jill Helme, the executive director of AthFest Educates, the nonprofit that puts on AthFest, said she wants to avoid scenarios where people go into beer tents and get separated from their group, or can’t go to another stage when a band’s set ends because they haven’t finished their beverage. “We want to give people an opportunity to move more freely and not stay in one spot while you finish your beer,” she said. In addition, because a police officer must be stationed at each beer garden, the change would reduce police staffing needs and the festival’s costs. The tents would remain, however, to provide shade to keep keg trailers cool.

Mayor Kelly Girtz said he plans to assign the issue to committee this fall. “What I’ve asked [Police Chief Cleveland Spruill] to do is just pay attention during the festival season and think about what the viable options are for alcohol downtown,” he said. It may be easier to do in a contained area like AthFest than an event like Twilight, which doesn’t have any physical boundaries.

Commissioner Allison Wright, who chairs the Legislative Review Committee, said she began to think about “beer tents without borders” during a St. Patrick’s Day pub crawl. The LRC is already looking at several alcohol-related issues, such as minimum drink prices.

“When you see large groups of family and friends mingling about the whole downtown during festivals, it is a shame that separation and limitations occur when a cold beer is involved,” Wright wrote from Athens’ sister city of Cortona, Italy, where UGA is celebrating the 50th anniversary of its study abroad program. “In my U.S. and international travels, I have seen and experienced festivals that have successfully implemented can/plastic container exploration within specified festival boundaries. This is beneficial to the tent vendors, since shopping and eating can be [done] while folks are finishing a beer, or want to include an adult beverage with the BBQ they have found. Another benefit is… allowing folks to enjoy the music, like on the dance floor area, and likely better viewing from locations outside a beer tent.”

Alcohol was once the third rail of Georgia politics, but many communities are easing their rules. The state legislature under former Gov. Nathan Deal (a teetotaling Baptist) let cities and counties put Sunday sales up for a vote, and such measures were overwhelmingly approved even in conservative places like Oconee County. In recent years, the legislature has also removed some barriers to selling alcohol near churches and schools as an economic development tool aimed at encouraging grocery stores to open in urban areas.

Many Georgia cities are creating “special entertainment districts” where public drinking is allowed, said Amy Henderson, communications director for the Georgia Municipal Association. According to a list compiled by GMA last year, at least 22 cities—including Gainesville, Commerce, Toccoa, Dublin and a number of cities in the metro Atlanta area—either allow open containers in certain parts of town or during special events.

Other cities with such districts include Kansas City, MO; Louisville, KY; Birmingham, AL; and Memphis, TN.

Savannah famously allows bar hoppers to sip from to-go cups as they wander the streets, but Wright said she’s not interested in relaxing the open-container law that far in Athens. While UGA allows tailgaters to drink on campus, she said she’s opposed to extending that right off campus. “Those are by nature more rowdy crowds,” she said. “Family-friendly festivals are the focus.”

While Helme was hoping to un-barricade the beer gardens this year, she said she understands why the process is taking longer, especially with a new police chief. “There is a lot to consider if they change this policy,” she said.

One change that will take effect this weekend is AthFest’s new VIP area. In previous years, VIP areas were located indoors, but this year it will be located inside a converted shipping container with a view of the Washington Street stage, Helme said. VIP tickets are $140 for the weekend and include three free drinks per day, as well as a commemorative mug. Only 15 remained at press time, so they may be sold out.