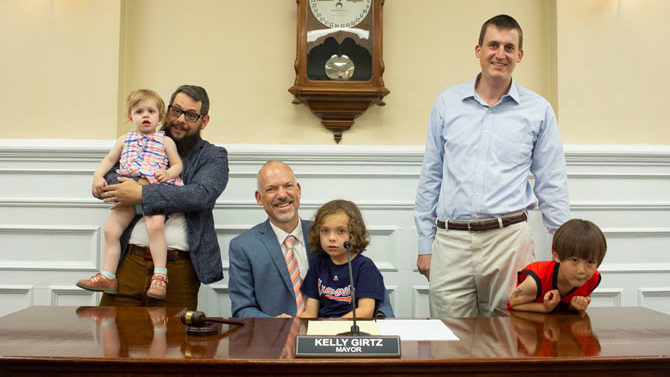 Politics is full of people who act like toddlers, but at Athens City Hall, some of them have an excuse: They actually are small children.

The progressive wave that swept five new Athens-Clarke County commissioners into office last year brought with it a youth movement. Four of those five commissioners, along with new mayor Kelly Girtz, are decades younger than the people they replaced. Three of them—Girtz and commissioners Russell Edwards and Tim Denson—happen to be fathers of young kids. (Three other commissioners’ children are grown, and five have no kids.)

Parenthood, especially at that stage, brings its own set of challenges beyond dealing with irate constituents or crafting the perfect ordinance. Having an unprecedented number of parents on the commission is also changing the dynamics of local politics, especially in a time when dads are playing a more active role in child-rearing.

Every parent knows how hard it can be to juggle work and family. For the mayor and commissioners, the conundrum is compounded by their duties as elected officials on top of everything else.

Before being elected mayor, Girtz served three terms on the commission, and he was an administrator for an alternative high school that held classes at night, so he’s used to being away from home in the evenings. Campaigning, though, “was a killer,” and now that he’s mayor, the demands on his time are even greater. “I try to be conscious of saying no,” he says. “I think Noah or Andrea [Griffith-Girtz, his wife] would tell you I haven’t perfected the art of saying no, but I’m trying.”

Like any other busy household, they all have their routines: Girtz is a morning person, so he gets Noah, who’s about to enter first grade, ready for school or camp, and Andrea takes over in the afternoons while Kelly heads off to a commission meeting or community event. While Jenny Denson, a graphic designer at UGA, is at work, Tim stays home two or three days a week to watch their daughter, Sarah Michelle. Until Teddy Edwards started school, Russell was a stay-at-home dad while his wife, Airee, ran the downtown store they own, Agora Vintage.

Sarah was less than a year old when Denson was running for the District 5 commission seat before the May 2018 election, and he often went door-to-door with her strapped to his chest. Edwards would pull his son Teddy, now 5, in a wagon or a special seat on his bike while campaigning in Five Points.

Once, the Girtzes were caught off-guard by a teacher planning day, and Kelly wound up taking Noah into the office with him for a series of meetings. Noah enjoys ceremonial events, his dad says, but “he’s got about a two-meeting limit. Around noon I noticed he was being a little less… flexible.”

This summer, Edwards signed up Teddy for camp at the YMCA, but only for three weeks to see if he’d like it. He did—but by that time, the camp was full for the rest of the summer. “I’m about to find out again what it’s really like to juggle,” he says.

He can ask Denson, who often finds himself juggling his work as an organizer with the United Campus Workers of Georgia union, his work as a commissioner and taking care of Sarah Michelle. “It’s a real challenge,” he says. “It requires constant communication between me and Jenny.”

Those communication skills—and the patience required to deal with the demands of parenthood—come in handy behind the rail, too. Denson first got involved with local politics through Occupy Athens, the aggressive, vaguely anti-corporate movement that began on Wall Street in 2011, and Edwards led the hard-liners in a fight against a downtown Walmart seven or eight years ago. Both have taken on a more conciliatory role on the commission. Edwards says fatherhood has given him perspective and more of a long view. “I feel like my conflict resolution skills have improved,” he says.

Girtz and Denson “are good at just creating a positive atmosphere,” Edwards adds. “It seems totally different, the entire vibe. There’s a lot of collegiality among the commissioners.”

Denson credits Edwards and Girtz with “building a culture on the commission and in City Hall that’s more family-friendly.

“To me, it was really helpful to have some other men around me, including Kelly and Russell, who were comfortable having their children around,” Denson says. That’s in contrast to previous generations, when dads tended to be more distant, and there was a stigma associated with bringing children into a work environment. But Sarah has a blast running around the hallways and up and down the aisle in the commission chamber before meetings. “It’s exciting she feels so welcome,” he says.

But City Hall could still be more welcoming to families. A recent article on the urban planning website Next City suggested that having child care at meetings, as Ithaca, NY has done, can diversify civic engagement, which is often dominated by retirees and others with lots of free time. Athens for Everyone, the progressive group Denson founded after his run for mayor in 2014, offers free child care at its meetings, and Denson would like to see the ACC government do the same—an idea Edwards also supports.

While in the past some have felt that a crying child violates decorum, Denson believes citizens should also feel comfortable bringing their children into the commission chamber. “That should be normal,” he says.

Fatherhood has also given all three a different perspective on policy. “It’s definitely created more empathy for me for struggling parents… who don’t have the support I have,” Edwards says.

Girtz envisions Noah still in Athens 80 years from now, which lends more urgency to issues like climate change. (He’s championed the transition to 100% clean energy for the ACC government by 2035 and the whole city by 2050.) Edwards, who campaigned on making downtown more inviting to families, is focused on parks and sidewalks, so that kids aren’t isolated and can explore their neighborhoods safely. Denson says he has a better understanding of the need for guaranteed access to health care, affordable child care and paid time off from work.

“It really is present that the decisions we make will impact people much younger than us,” Girtz says.