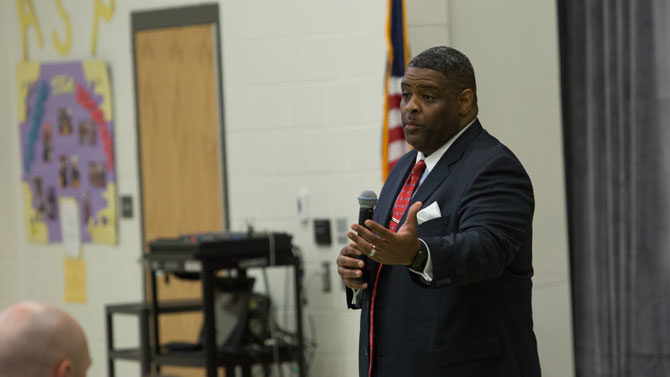 An ethics complaint filed against Clarke County School Superintendent Demond Means alleges that he plagiarized part of a letter to colleagues, accepted an inappropriate gift and may have lied about his dissertation on his job application.

Patrick McKee, a Newnan lawyer, filed the complaint with the Georgia Professional Standards Commission, which certifies educators, on May 3. McKee formerly represented the PSC as a senior assistant attorney general and currently is general counsel for the Southern Association of Colleges and Schools, an accrediting body.

McKee told Flagpole that he “represents a group of parents and taxpayers” in Athens, but would not say who. “At some point, the group will become more visible,” he said.

When asked to list his publications, including dissertations, on his online application, Means listed his doctoral dissertation, “Is the Role of the Superintendent Political?” (He has also referred to the title as, “What Is the Political Aspect of the Superintendency?”) However, the dissertation is not available on any websites, such as ProQuest, where graduate students usually submit their dissertations. A librarian at Georgia State University whom McKee asked for help was also unable to find it.

The district has never asked Means for a copy of his dissertation, CCSD’s attorney, Michael Pruitt, wrote to Atlanta lawyer Greg Feagle in response to a June 2018 open records request that is included in McKee’s complaint.

A Cardinal Stritch spokesperson confirmed to Flagpole that Means did receive his doctorate, and that the university does not have a copy of his dissertation.

The dissertation “is not published as represented and may or may not exist in a form Means wishes to be made public,” McKee wrote in the complaint.

According to the complaint, Means also violated ethical standards by not disclosing that he had an ongoing relationship with AVID when he recommended last June that the board spend $511,000 to send teachers for training in the instructional method. Means mentioned that he taught a class for AVID in response to a question from a board member last month. When questioned later, Means told Flagpole that he was paid $500, below the threshold in his contract requiring board approval for consulting work.

Board President Jared Bybee and Vice President Linda Davis defended Means in an Apr. 29 letter to “CCSD community members,” writing that Means had been clear that he had worked with AVID at his previous district in Wisconsin, and that he left the decision to adopt AVID up to individual schools. Bybee and Davis also wrote that, “for the sake of clarity,” Means would donate his $500 stipend to CCSD.

“Dr. Means continues to act with the highest level of professional integrity in leading our district,” they wrote.

Accepting personal payment from a district vendor violates state ethical standards and gives the appearance of a conflict of interest, according to McKee.

In addition, the complaint accuses Means of lifting a paragraph in a Mar. 9 letter to teachers districtwide from the 2014 book You Are the Opportunity You Were Waiting For: The Philosophy of Success in 21 Timeless Principles, by Luis E. Romero. “A seventh grade student who submitted such blatantly plagiarized material in a research paper would be failed for such dishonesty,” McKee wrote in the complaint. “This dishonest conduct cannot be tolerated in a superintendent.”

Shortly after Flagpole posted an article online about the ethics complaint, Means sent out an email to CCSD staff admitting that the passage, which he saw online, “was not properly cited.”

When asked for comment, CCSD’s communications director, Mary Walsh Wickwire, said that “the information regarding the allegation has been received by the district [but] because it is a personnel matter, the district cannot and will not respond.”

However, Means did address the allegations at the May 9 school board meeting, telling the board that “the narrative” has become “toxic” and vowing to continue to work toward equity. He compared himself to Martin Luther King Jr. as “an advocate for the marginalized” and said his critics don’t like seeing a decisive black man in a leadership position. “I’m disappointed that we have a community right now that assumes guilt until proven innocent,” he said. “It makes the work somewhat distracting, but you need to know that you have a superintendent who isn’t going to back down… because some individuals have a perspective.”

The 18-member Professional Standards Commission, made up mostly of teachers, has the power to reprimand Means or suspend or revoke his certification. If the commission rules against him, Means could accept its decision or ask for a hearing before an administrative law judge.

However, McKee said he isn’t seeking any particular punishment. “We expect the questions would be answered,” he said.