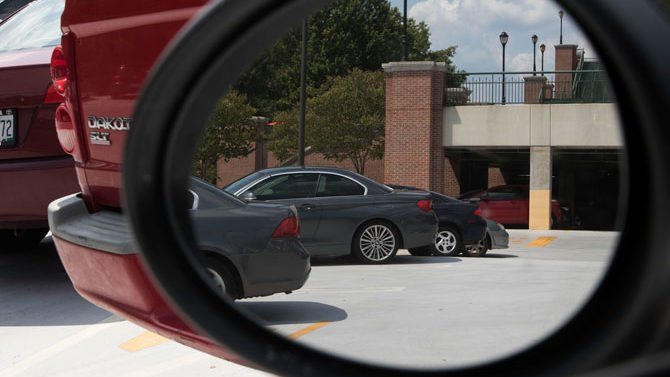 Some University of Georgia employees are handing over significant portions of their paychecks just to come to work.

Paying up to $40 per month to park represents a growing financial burden to the approximately 3,300 campus workers who make less than $1,800 per month.

One UGA library employee—who asked to remain anonymous because she fears for her job—said she takes a 90-minute ride on public transit to get to her job to avoid paying for parking, versus a 15-minute commute by car. That’s not even an option for employees who live outside of Athens, or those who have to be at work before buses start running at 6 a.m.

She called UGA’s parking rates “an abusive practice,” especially in light of the university’s low wages and rising housing prices in Athens. “I do not believe that anybody making less than a living wage in Athens should be having to pay to park on campus,” she said. “It is a necessity in order to work here, especially if you can’t afford housing here in Athens, which is going up and up.”

The United Campus Workers of Georgia, a union that started organizing at UGA in 2016, recently turned its attention to UGA’s parking practices. It’s calling for the university to implement a tiered system in which parking fees are based on a worker’s salary, with the lowest-paid workers paying the least. “If you have the ability to pay the $40 per month, then you should be paying that. But many workers can’t,” said Joey Carter, a member of the union’s steering committee.

Using raw data from the government transparency website open.georgia.gov, union members calculated that the mean salary for service and maintenance workers, including management and supervising positions, is $25,282.

It is not easy to find a comparable university that charges more for parking than the University of Georgia does. Passes for decks are $40 per month for students and employees alike, and parking lots are $30, with the exception of some outer lots, which are $20.

The University of Arkansas—located in Fayetteville, a city that’s a similar size as Athens—charges just $21.21 per month for employees making less than $40,000 a year. Employees making more than that pay $30.94 per month.

Paying hourly rates to park in decks, which some employees do when they only have to come into their workplace periodically, can also be burdensome.

While earning her undergraduate degree, graduate student Tamar June worked as a figure model at the Lamar Dodd School of Art. The school,  on East Campus off of River Road, was far enough away that it wasn’t always practical for her to bike from her home. As a figure model, June earned $20 for two hours of posing, and paying to park in the nearest garage would have cost her $7 for two hours, meaning 35 percent of her paycheck would have gone to parking.

“There was no one really to blame,” June said. “It wasn’t the fault of my modeling coordinator. It wasn’t even the fault of the art department. It’s just something that’s not done across campus. You just expect your employees to pay for their parking.”

Around this time, figure models organized for higher pay, and Lamar Dodd increased its hourly wage from $10 to $15—a rate more competitive with other universities.

As a land-grant institution, the University of Georgia never had to pay for the actual property on which most of its parking lots and decks were developed, but it does invest money in building and maintaining the infrastructure, as well as paying parking-services workers. Unlike academic departments, which receive funding from the state, parking services is an auxiliary service, defined by the Board of Regents as an entity that has to pay for itself. Operating expenses must be recouped somehow.

In fiscal 2017, UGA auxiliary services—which also includes food services and residence halls—brought in $188 million and spent $170 million. The university grossed $23 million off of parking and transportation alone, according to its annual financial report.

Carter, the union member, said UGA treats its employees like customers, and placing the burden of cost on employees is a corporate practice that UGA has adopted. “UGA privileges a lot of other things over the salaries of its employees and the accessibility of the workplace. Parking has to do with both,” he said. “We want to be a part of the conversation with our employer about what is an equitable rate to park on campus.”

To address the union’s concerns, UGA recently opened a $10-a-month park-and-ride lot on College Station Road near the Loop. From there, a free shuttle brings commuters onto campus.