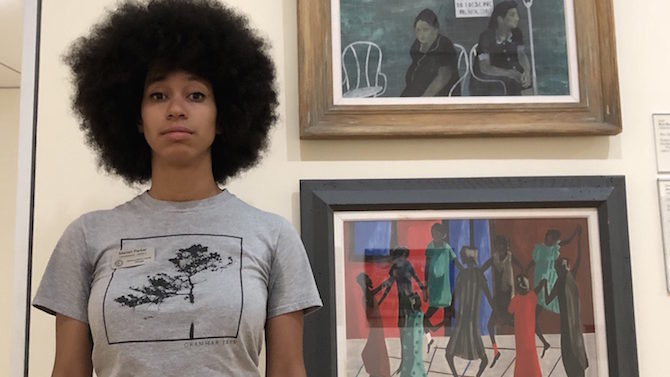 “The Hill, Daily Mail, Afropunk, Blavity, Independent, Washington… Times? Post? One of those. I should know. I’m going on the Tom Joyner show tomorrow.”

Mariah Parker is recounting all the news outlets that have profiled her—there were others, including Newsweek, Teen Vogue and the AJC—since June 5, when she took the oath of office as Athens-Clarke County’s newest commissioner on a copy of The Autobiography of Malcolm X. The image of an afro’d young black woman, fist in the air, with a message of economic and social justice, ready to take her place in the halls of power briefly captured the public imagination.

Parker recently sat down with Flagpole at the Georgia Museum of Art to discuss her brush with fame and the work ahead. The interview has been condensed.

Flagpole: Why did you choose The Autobiography of Malcolm X to be sworn in on?

Mariah Parker: I’ve taken a lot of personal inspiration from his transformation throughout his life, from extreme poverty and racial violence and the ensuing nihilism to becoming one of the most powerful political thinkers of that century, and being a really outspoken and fearless agitator for communities similar to the one I now serve [East Athens]. I wanted to swear my oath to be as vocal as he was, to be as fearless as he was, and to inspire as many people as he did. As well as thinking about the kids today, still, in Nellie B, growing up the way he grew up almost 100 years ago.

FP: Were you expecting all this attention?

MP: Not at all. It was just what I wanted to do. I’m glad it inspired so many people, but honestly, it was just a personal accountability thing. I have received so much feedback from it, both positive and negative. I could not have imagined that happening.

FP: There was a horrible backlash. How did it make you feel seeing all those comments online?

MP: It was scary at first, getting death threats and things like that. For a day or so, I didn’t leave my house, and when I did, in the street I’d run into people who were honking, and it was like, “What does that mean? Are they honking because they’re excited, or are they honking because they wish they’d jumped a curb?” I was completely caught off guard by it and became genuinely fearful. Ultimately, I had some folks reach out to law enforcement just to let them know there are folks who wish I were dead. All the other negativity slid off my back. I think there are a lot of keyboard warriors out there, and a lot of the arguments I was seeing weren’t very nuanced, for why I’m an evil person. It was pretty easy for me to dismiss it. More so the quantity than the quality was overwhelming for a bit…

FP: It’s sad that you have to clarify that.

MP: Yeah, right? But in order to serve the community for the betterment of everyone, I want to clarify that systemic oppression of racially and economically marginalized people ends up hurting the whole community. The fact that our schools remain largely segregated creates tensions that end up hurting both sides of people. Kids over at Chase Street [Elementary] or someplace who don’t get to see the other side of things, they miss out on something in life. They’re missing a side of the human experience. When I talk about wanting to help out historically marginalized groups, it’s because our whole society is harmed when those people are harmed.

FP: Has the backlash blown over now?

MP: Yes. Things have gotten better. I forgot to mention that Breitbart reported on it. The article wasn’t even that bad—the worst thing it said was that I was tatooed. Ooh, terrifying. After that, I didn’t see an uptick in people coming after me or anything. After that, I was like, it’s fine.

Reading the comments—and I don’t know why I read the comments—it was like, “They don’t even live here. They couldn’t even find Athens, Georgia on a map.” So it’s going to be fine. They have no stake in the decisions going on here. I represent District 2 and make decisions for Athens, so I’m not even worried about that.

FP: There was a particular picture making the rounds, of you on a bike flipping off someone in a car. Do you remember the circumstances behind that photo?

MP: I can tell it was taken at least four years ago, because my bike has been gold since, I think, about 2014 or ’15. It seems it was an instance of somebody yelling at me out the window, and I turned, and they were photographing me without my permission. That combined with being a cyclist, which is already a high-stress position to be in, I got mad. I still get mad when people invade my privacy based on my appearance. I don’t take back the content of that photo. If people want to talk about my politics, that’s cool, but if it’s just my appearance, I don’t have much patience for that.

FP: Being more visible now, do you feel like you have to watch what you say or edit yourself?

MP: I’m a little bit more careful, in terms of how I say things, but the content remains the same. I’ve always repped for the same things. It might not be appropriate to be as caustic in my humor or as casual with some of the language I use in regular social settings. Otherwise, the content of what I rep for, I don’t feel the need to edit or water down.

FP: Now that you’re in the job, is it what you expected?

MP: Coming up face to face with it, it’s kind of like hitting a stop sign as far as what my priorities are and what are the priorities of the commission. My reception among the commissioners has been very interesting. I’m always cordial and kind, because I think working from a baseline of mutual respect is important, but I don’t let it get me down when that respect is not reciprocated. That’s been challenging, but it gives me hope that in the next weeks and months, digging into it, putting forward policies I’m passionate about and that I think are critical, I can do it better. It’s a learning process.

FP: There were times during your first meeting when I felt like some of the other commissioners were maybe talking down to you a little bit. That happens sometimes to the new person.

I do need to speak up more when people are being completely disrespectful. I don’t know if you caught it, but at the work session, Nancy Denson referred to me as “Ms. Mariah” rather than “Commissioner Parker,” which I need to correct before they get used to it. Minor things, but they’re important when it comes to mutual respect and establishing a working relationship.

FP: Now that you’ve seen the sausage-making process, it’s really boring a lot of times. How do apply things like equity and social justice to bike lanes or sewer lines or all these really mundane things the commission does 90 percent of the time?

MP: Those are issues of equity also, when it comes to transportation. Who gets that bike lane? It’s a small question, but it affects a person’s quality of life. Especially when you look at how they aggregate, and how cumulatively they’ll affect somebody’s ability to achieve their full potential and live happily or not. When you look at every bike lane and every sewer line and every zoning change, that could be death by a thousand cuts for a person living in poverty, or it could something that completely transforms their live.

FP: Being the first of the new commissioners to take office, how do you see the commission changing when the other four come on in January?

MP: I think our ability to shift the conversation will be a lot easier. I’ve seen already that chances I’ve taken to push the conversation in a direction that few want right now, there’s a dominant way of thinking that’s very normalized, and they have strict control over. When we have more people behind the rail, it’ll be easier to have these conversations. It won’t be so jarring to bring up, “Why do we spend 50 percent of our money on the criminal justice system?” I guess we’ll be operating on a different set of assumptions.

MP: I think that my community is really hungry for somebody who will demystify the sausage making, like, hey, this is how you get a pothole fixed. I don’t devalue occupying that role also. I’m still working on building those relationships with staff so I can advocate for those things.

FP: What are you going to do when you finish your PhD [in language and literacy education]?

MP: When I finished my master’s [in linguistics], I didn’t want to leave Athens. That’s the general trajectory for most people, but I applied here because I wanted to stay here. I got in other places.

When it came down to going back to work at Bel-Jean or being a [teaching assistant], which pay the same amount of money, time to go back to school. It just seemed like the natural next step, even if I never wanted to be a professor. I just like to learn.

FP: What attracted you to Athens in the first place?

FP: How does being a commissioner affect your music career? [Parker performs under the name Linqua Franqa.] It’s hard to go on tour when you have all these meetings.

MP: I recognized my life was going to change a lot as far as music, and that was fair, because I got to enjoy more success than I ever thought I’d have. So instead of saying, “I can be the next R.E.M.,” I can turn my attention to the issues that I think are critical right now. I’m OK with not getting to tour as much anymore, or perform as much anymore.

FP: If you rapped at commission meetings, a lot more people might show up.

MP: You’re not the first one to say that—have your [commission-defined option], break it down in verse, come back at Mike [Hamby] with some freestyle. That’s funny.