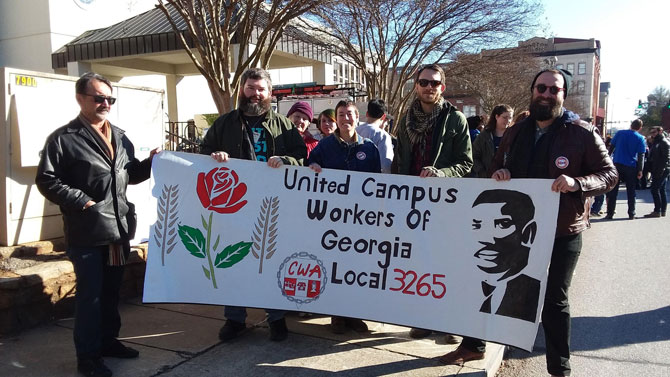 A skirmish in the national culture wars broke out on Athenians’ social media pages recently when United Campus Workers of Georgia representative Eric Rose received an unexpected note from a local radio station in response to a routine request for an advertising rate sheet.

While ad reps at WXAG 1470 AM and Flagpole complied with his requests, Paul Francis, the general manager at Bulldog 93.3 FM, instead “passed” on running the University of Georgia union’s ads, writing in an email that he had researched the union online and discovered that the “organization’s objectives are not consistent with the free market principles on which our organization was founded.”

Francis’ note suggested that “if a University of Georgia employee feels that he [or she] is not earning just compensation, then he can search for employment in the free market.” He continued, “If he don’t [sic] find what he is looking for there, then he can start his own business and compete in that sphere. If he is unsuccessful earning the level of compensation he hoped to earn by providing value to others, then he was not worth what he imagined.” Francis ended with an admonition worthy of Horatio Alger: “We all only reach our potential through taking accountability for ourselves.”

Rose posted the note on his Facebook page, and soon after, others took up the cause, commenting on and widely sharing the message. Comments ranged from the expected outrage to suggestions that local activists threaten boycotts of the station’s advertisers. (At least one advertiser, Hodgson’s Pharmacy, has pulled its ads.) One commenter wrote, “Bulldog 93.3 claims to be ‘the Sound of Athens,’ but none of the bands on their playlist are from Athens.”

When asked why he thought Francis took the time to write the note, Rose said, “Yeah, he could have just ghosted us instead of giving us a book report on Atlas Shrugged.”

The union was formed in 2016, after UGA adopted new Fair Labor Standards Act overtime rules just before the deadline of Dec. 16, and university employees, in an anomaly involving state law, received only one half of their usual income in November 2016, skipping an entire two-week pay period, which they won’t receive until they leave their jobs or retire. A firestorm of protest ensued, and some employees quickly took second jobs to make up for the temporary shortfall. The pay mix-up prompted some employees to seek new ways to communicate effectively with university management, and organizers reached out to United Campus Workers of Tennessee to help launch a local union.

The employees selected to align with the Tennessee union on the strength of its recent success fighting that state’s stealth effort by its governor, Bill Haslam—a billionaire businessman and, until President Donald Trump took office last year, the wealthiest elected official in U.S. politics—to privatize thousands of state jobs. Once the union got wind of the governor’s campaign in 2015, it mobilized the union’s 1,600 members, including workers such as custodians, skilled trades, faculty and other workers, to protest the effort.

The union pushed back hard, obtaining massive media exposure and a strong rejection of the plan from the electorate and the legislature. In fact, a Vanderbilt University poll found that about two-thirds of Tennesseans rejected the plan. Feeling the pressure, the governor backed down and made the change voluntary for state campuses. As it turned out, no state campuses embraced the plan, and universities are continuing to manage their employees as they always have.

“This was a huge victory, and it shows the power that average people have when they engage in collective action,” said Tom Smith, organizing coordinator for the Tennessee union.

Rose said the union has enrolled 100 members to date, and that he wants to advertise in order to inform UGA employees of the new union.