Checking In With the Resistance, One Year Later 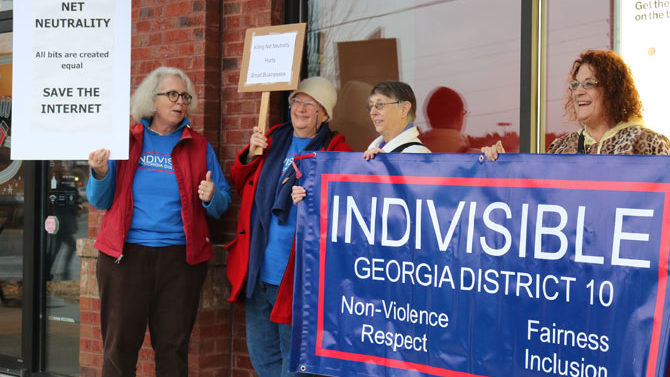 In late 2016, two congressional aides, despairing of Donald Trump’s election, launched Indivisible, a movement designed to provide frustrated progressives with specific measures to push back against anticipated changes in the political environment.  They prepared a playbook of actions of resistance, inspired in great part by the dogged work they observed from the tea party starting in 2010, and posted it online.

The guide was an instant success and has been downloaded more than 3 million times, according to the Indivisible website. The movement exploded almost immediately, and thousands of chapters were formed across the country, made up of individuals who weren’t content to confine their indignation to anguished social media posts. They wanted instead to act, and these actions have led to some startling victories over the past year.

Around the time of Trump’s inauguration on Jan. 20, 2017, three Indivisible-inspired groups formed in Athens. There are currently two active groups, Indivisible Georgia District 10 and Together We Will. A third group, Indivisible Athens, formed by Barrow County resident Dawn Johnson, disbanded when she decided to run against state Sen. Frank Ginn (R-Danielsville). These groups have hundreds of active members who are resisting the administration daily through phone calls, meetings, public protests and post-card mailings.

Probably the most significant contribution the two groups made was to encourage higher-than-usual voter turnout for the November special elections for Athens-area state representatives in Districts 119 and 117, both previously held by Republicans who hadn’t been challenged in years. Democrats Jonathan Wallace and Deborah Gonzalez earned upset victories in both districts, energizing the local members of Indivisible.

Let’s take a look at what else these groups have been up to this year, and what they are planning for 2018.

Indivisible Georgia District 10 diligently follows the Indivisible playbook, and its 754 members work hard to fulfill specific goals of encouraging voters to go the polls and communicating with local and national representatives. Its members record their activities in online logs and appear regularly en masse at public protests, including town-hall meetings held by the staffs of Sens. Johnny Isakson and David Perdue and Rep. Jody Hice.

Members of this group skew toward middle-aged professional women who “have had careers that give them a real depth of experience,” according to Jacqueline Elsner, who founded the group with Toni Reed in early 2017. “[Our members] have personal skills of facilitating small groups and significant political experience,” Elsner says. “One member had years of experience working with Sen. Isakson.”

That experience helped the group record hundreds of phone calls, postcards and faxes to lawmakers urging them to vote “no” on legislation like repealing the Affordable Care Act. Writers sent letters to the editor to local papers. The group led dozens of its vocal members to attend a town-hall meeting held by aides to Hice and Perdue, who abandoned the meeting format to allow the demonstrating audience to take over with a series of angry and poignant speeches by Indivisible members and others.

In November, just prior to the Federal Communication Commission’s ruling on net neutrality, dozens of Indivisible members demonstrated in front of the Verizon store on Epps Bridge Parkway. (FCC Chairman Ajit Pai is a former Verizon executive.) They also held monthly meetings, and invited Wallace, Democratic congressional candidate Chalis Montgomery and other candidates from both sides of the aisle to speak to the group.  Many of the group’s activities are posted on its Facebook page.

With more than 1,500 local members, Together We Will is also affiliated with Indivisible and employs that group’s playbook of direct outreach to state and national legislators and other strategies.

This group was founded and is led by Carina McGeehin, who responded to the national organization’s suggestion for groups in blue states to partner up with teams located in “blue dots surrounded by a sea of red,” says McGeehin. She reached out to Together We Will’s partner chapter in Palo Alto, CA, whose nearly 3,300 members contributed to several campaigns. “It’s a fantastic partnership,” McGeehin says. “They [felt] helpless and frustrated to watch what was happening in other states, so they decided to partner up to help our cause.”

Together We Will is a registered Indivisible group that emerged from Pantsuit Nation, a pro-Hillary Clinton group that formed just before last year’s election. The agile group responded quickly to outside events with well-attended protests. Its members have demonstrated against the recent campus carry legislation, organized a local event the day after the Charlottesville, VA protests and showed up for the local March for Science last spring. They also held postcard-writing events at Hi-Lo Lounge, where members sent out more than 500 postcards in support of Doug Jones’ successful campaign to be Alabama’s first Democratic senator in more than 20 years.

“While one of our main objectives is to say ‘no’ and resist the administration, we are also trying to build structures for the future as well,” McGeehin says. “We are offering other solutions and keeping an eye on the horizon.”

The group’s activities encouraged Wallace to run in a right-leaning district where Democrats had not run a candidate since 2011. Wallace says that not only did he get significant support from these energized groups, but “[Indivisible’s] work… fostered an environment where I felt I should run. They did some groundwork… identifying issues that made the path easier for me to run. The issues they are championing are vital to all our civic interests.”

Both those state House races, plus Hice and two local state Senate seats, will be on the ballot again this November. Can Indivisible members, energized by their successes in 2017, keep up the momentum?