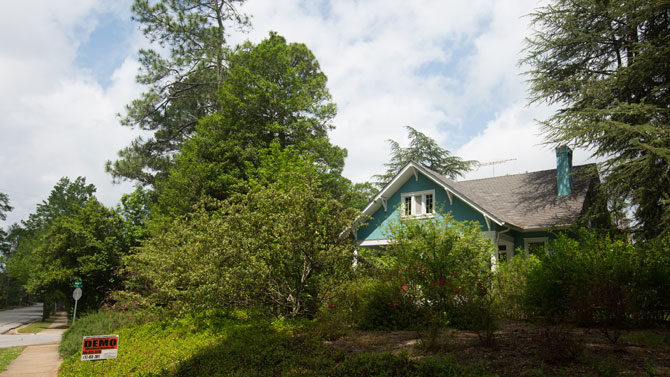 Jennifer Hauver loves the house she’s living in on Milledge Circle. She’s there until May 19. With the academic year over for public school in Athens, her girls, her husband and she will head to Virginia, where a new job and her extended family await. What awaits the house remains uncertain. Despite two people expressing interest in moving it, it may be torn down.

“We didn’t intend to live here so briefly when we bought the house,” says Hauver, who teaches in the UGA College of Education. “We thought we would live here a few years.”

Designed and built by Grandison Marion Caskey Sr. as his personal residence in 1920, the house is in the arts and crafts style, with exposed wood, beautiful floors and fireplaces. There’s a butler’s pantry and a remodeled kitchen, an added-on sun porch and an enclosed upstairs sleeping porch. Beside the living room fireplace are craftsman-style bookcases built and installed by Bruce VanSledright, Hauver’s husband, a custom woodworker.

The house has two bedrooms upstairs and a master bedroom downstairs. There are bathrooms upstairs and down. Outside the sun porch windows, you can see a huge fig tree, muscadine vines, blueberries and an herb garden. A fish pond and a stone bench complete the yard. An inspection report showed the house is in “perfect” condition.

Hauver decided to rely on Realtor Reign Streiter to sell the house. He advised her to “float the word” in February before putting it on the market. One week after it was listed, there were four offers, Hauver says. Two were strong, two weren’t quite so strong. She wanted to know how serious the potential buyers were.

So Streiter took an interested couple on a walk through the house. He reported back to Hauver that Travis and Monica Elrod “loved” the house and were excited to move into the neighborhood. Hauver breathed a sigh of relief and sold the house for $667,000. That was in late February. In March, the Elrods applied for a demolition permit. Formerly owned by Monica Elrod’s grandparents, the couple’s current house at 160 Tanglewood Dr. off Timothy Road is for sale for $989,000. (Travis Elrod did not return a call seeking comment.)

When she saw the demolition notice posted outside the house, “I was shocked,” says Hauver. “We walked around in a daze. It never crossed our minds that they would tear the house down. We feel we were duped.”

So the DEMO sign went up on Milledge Circle, and the emails started flying in the Five Points neighborhood. Someone was going to tear down the blue house at 398? Really? The beautifully restored house with the interesting yard and the Deodar cedars? Rachel Gabara and her husband Claudio Saunte couldn’t believe it. Both UGA professors, they live across the street from Hauver.

Soon, Gabara and her husband had gathered signatures from a majority of homeowners along Milledge Circle to start the process of establishing a historic district. Their commissioner, Diane Bell, used a county ordinance allowing commissioners to delay demolitions in their district for 90 days to put off issuing the permit. But two weeks ago, the preservationists learned Bell had quietly lifted the demolition moratorium before its June 11 end date, which means a demolition permit could be issued at any time. (Editor’s note: It was issued Monday, May 15, after the print version of this article went to press.)

Encouraged by Commissioners Allison Wright and Mike Hamby, the proponents for a historic district plan to move forward with the designation process, regardless of what happens to the house. From the Five Points intersection to West Lake Drive, they have gathered signatures from 59 percent of the 87 homeowners on a petition Gabara presented to the Mayor and Commission on May 2. Saute says they will ask for a demolition and construction moratorium of six–12 months as studies are done to evaluate if the neighborhood meets the classification qualifications.

At the last commission meeting, about a dozen of Bell’s constituents and others who are interested in historic preservation lined up to plead with Bell to explain her decision. She hasn’t responded to emails, phone calls or direct questions from constituents, fellow commissioners or reporters. “There’s a time to be silent,” is all she said at the end of the meeting.

While Bell would not return Flagpole’s calls seeking comment, she later opened up to the Banner-Herald, saying that she did not want the Elrods to face a lengthy delay if a moratorium is declared.

For several years, Five Points residents have watched as buyers purchased homes for several hundred thousand dollars only to tear them down and build new suburban-style mansions that are out of scale and architecturally out of place. Infill housing rules the commission passed earlier this year—after planners spent years working with residents and homebuilders—addressed problems with new infill development. But the infill ordinance says nothing about demolitions, which are legal by right outside of local historic districts.

A Five Points historic district (or districts) has been discussed on and off for more than a decade. Recently, a small group of Rutherford Street homeowners pulled the trigger, in a process that went smoothly. And four years ago, Buena Vista residents facing many of the same issues as Milledge Circle residents won a bitter battle for a historic district in their mill-house neighborhood just west of Boulevard.

UGA historic preservation professor John Waters lives on Milledge Circle with his wife Charlotte. He says he’s cheered by the response of his neighbors to the possible house demolition.

“It’s awakened everyone to the real threat facing Five Points,” Waters says. “People who say these houses aren’t historic are expecting something like Mt. Vernon. When it comes down to it, the most historic buildings are of local significance. People need to realize these houses represent the history and the heritage of Athens, and yes, they are important to all of us.”