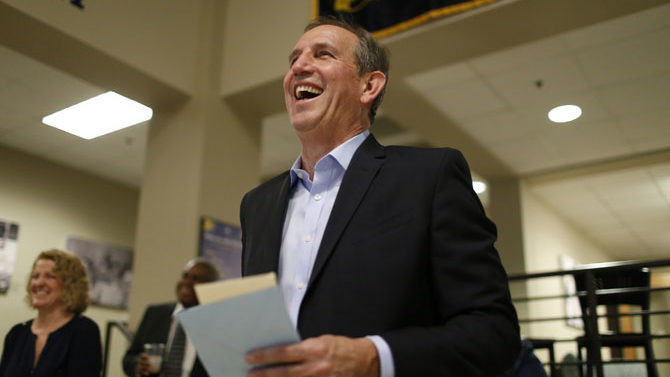 In February 2015, Philip Lanoue was in San Diego accepting the National Superintendent of the Year award.

“Lanoue has opened up the school district… not only to parents who want to visit schools and classrooms, but to the news media as well,” the School Superintendents Association reported. “He says being transparent, rather than trying to hide the district’s struggles, is a key to gaining and keeping community trust and support.

Almost one year later to the day, Lanoue was in Phoenix handing off the award to the 2016 winner. Meanwhile, back in Athens, a couple hundred angry parents and teachers were packed into the atrium at the Clarke County School District’s headquarters, questioning school board members about the district’s handling of an alleged sexual assault at Cedar Shoals High School and wondering aloud why Lanoue couldn’t at least Skype in if he couldn’t be there in person.

A year after that, Lanoue was out as CCSD superintendent, and the search was well underway for his replacement.

“You’re the best superintendent we’ve ever had, and we are so appreciative,” school board member David Huff told Lanoue at Lanoue’s last board meeting Dec. 8, nine months after the Cedar Shoals scandal rocked the city.

After more than seven years heading Athens public schools, Lanoue leaves behind a mixed legacy. As a data-driven wonk, he is credited with closing the “achievement gap” between white and black and low-income and middle-class students, and as a passionate, relentless salesman, with improving public schools’ poor reputation in the community. Graduation rates that hovered around 60 percent when he was hired away from the Cobb County system in 2009 are now about 80 percent, slightly above the state average. And while a few schools continue to do poorly according to the state’s performance measure, even the state school superintendent has acknowledged what Lanoue has long said: The formula doesn’t accurately reflect the vibrant experience of visiting a “failing” Clarke County school. Others—most notably Chase Street Elementary—he’s helped turn around, and the numbers reflect that.

“I feel [the district] is in a really good place,” Lanoue said at a reception honoring him Feb. 28. “You’re always going to have challenges, but I applaud our teachers. What they’re doing in the classroom is pretty amazing.”

But teachers haven’t always been his biggest fans. The Cedar Shoals incident opened the floodgates for many teachers to complain that they’d been handcuffed on discipline, and that the administration not only wasn’t listening, but that they feared for their jobs if they spoke up publicly.

Such complaints bubbled up after the Athens Banner-Herald reported that, on Jan. 7, 2015, a 15-year-old student reported she had been sexually assaulted by three older classmates in a stairwell. Police did not make arrests for nearly a month because of difficulties accessing a recording from a malfunctioning video camera. In the meantime, the accused students went unpunished, remaining in the classroom, and students, parents, teachers and the public were in the dark.

Although Lanoue took responsibility—“The buck stops here,” he said at a February 2015 Cedar Shoals PTO forum—administrators and school board members said they didn’t initially act because they weren’t made aware of the severity of the incident, and federal student privacy law prevented them from releasing much information. Conspiracy theorists wondered whether Lanoue covered up the incident because he was about to be named superintendent of the much larger Fulton County School District. (He later withdrew, saying Clarke County “is where I want and need to be.”)

Officially, the blame fell on school Principal Tony Price, who was essentially fired days after the incident became public. (Price defended the way he handled the case.) In July, a grand jury called for an outside investigation, but that never happened. The public has never gotten a full reckoning of the assault’s aftermath, and probably never will.

While horrific, the incident did serve to focus attention on problems within the district that had long gone overlooked, including poor communication and lax discipline and attendance policies.

“Really kind of the whole piece, obviously, was the Cedar event, which was tragic in and of itself, but it happens, and you have to deal with it,” Lanoue told Odyssey, the Clarke Central student magazine. “From there, we just began to ask a lot of questions. There’s a lot of internal questions to answer, and certainly a lot of external questions people are asking.”

Last April, about 200 parents, teachers and other concerned community members gathered at H.T. Edwards for a public-input session on discipline. An informal group of Cedar Shoals teachers came prepared with a booklet listing their recommendations.

“Real action is needed, not just talk,” Tommie Farmer of the Clarke County NAACP told the school board at a subsequent meeting. “Sweet talk is no longer acceptable… There are some serious concerns that are being swept under the table.” She cited discrimination, discipline, attendance, teachers being reluctant to speak out and family engagement, among other issues.

That airing of grievances was the starting point for the district to completely rewrite its student code of conduct, which many said was written in legalese and did not clearly lay out what is expected of students. That document is expected to be presented to the school board in April.

In the meantime, the board and administration have already hired more security guards and police officers, tightened up the district’s attendance policy and implemented new procedures requiring top officials to meet regularly with law enforcement.

The new code of conduct will “represent the values of the community,” CCSD Executive Director for Policy Dawn Myers told a group of East Athens parents in January. “There hasn’t been a comprehensive review in decades. Some of what we do in terms of restorative justice isn’t reflected in the code.”

At that meeting, several African-American parents said discipline often seemed arbitrary to them, and that their children were being funneled into the criminal justice system for offenses like a sixth-grader bringing a pocketknife to school.

Disciplinary reforms will long outlast Lanoue, as will another of his signature initiatives: technology. Under Lanoue, CCSD students are increasingly studying and doing homework on school-issued laptops and tablets. That saves money on textbooks in the long run and prepares students to use technology in the workforce, but it’s not without its critics. In a district where 80 percent of students were eligible for free or reduced-price lunches before meals became free for everyone, is internet access available to all families—even at the $10-a-month deal CCSD and AT&T offer?

Lanoue also pushed to turn CCSD into a charter district, in which some policymaking will devolve from the Board of Education to school governance boards made up of parents, teachers, students and community leaders. Those two issues—technology and the ongoing implementation of the charter district—are ones that “I really think it’s important to stay focused on,” Lanoue said.

As the search for Lanoue’s replacement nears an end, no one is looking for a clean break. “Dr. Lanoue’s leadership was acknowledged by many people,” said Brad Draeger, a consultant hired to conduct the search. “He has his critics, but even the critics would tell us what was wrong, but then, ‘He did this and this and this.’”

Draeger and colleague Diane McCauley conducted 177 interviews with local residents, and another 965 people took an online survey. On the plus side, the community is engaged, teachers are dedicated, and the district has top-notch facilities. On the negative side, teachers feel overwhelmed, and the school board is viewed as distant. Diversity is seen as a strength, but there are questions about whether all groups are treated fairly. The jury is still out on Lanoue’s technology initiative.

“He did a lot of really great things for the district,” said Sarah Ellis, vice chair of the BOE. “It’s nice to reflect on that, but also to look forward to the new energy and ideas coming from a new administration.

“There are still some trust issues, especially for our Eastside community,” Ellis said. “This is a perfect opportunity to rebuild that trust.”

School board members are interviewing candidates this week, and they’ll meet with three finalists on Mar. 28, 29 and 30. The public will have an opportunity to question the finalists Apr. 3 at 6 p.m. at a location yet to be determined, and the board will announce its choice the following morning.

As for Lanoue, he is building a house near Greenville, SC, where he plans to write a book. “I’ve got some options open,” he said. “I want to be able to work with leaders across the country, if I can help.”